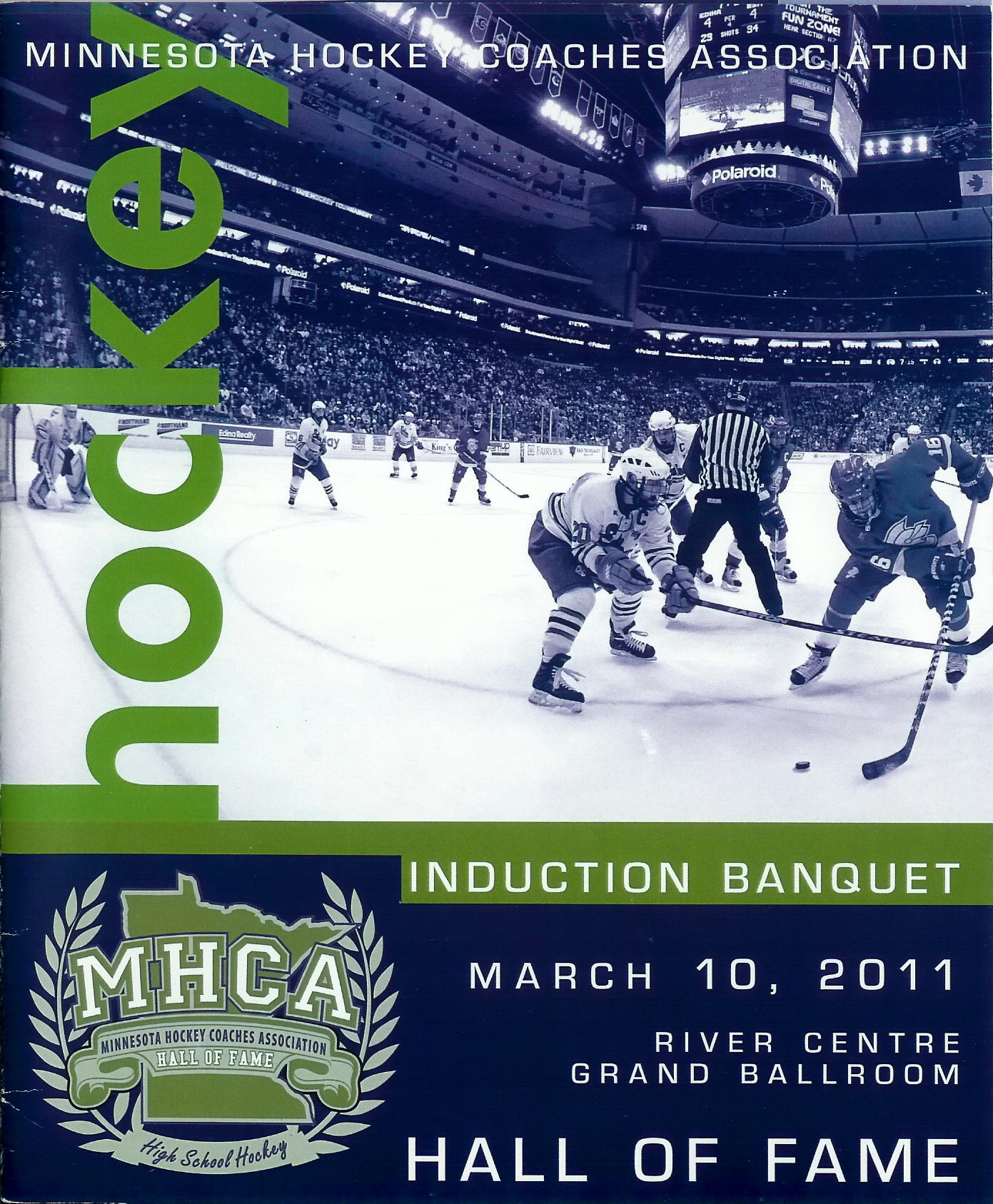 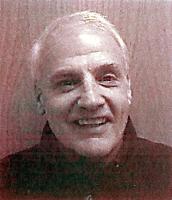 Bob Frerker (Rochester John Marshall) A true inventor, Bob is also known as an innovator whose teams could play multiple ways and adapt to their opponents. Frerker, who was a goaltender himself in high school, developed one of the first goalie camps ever in Minnesota.  After being a member of the Wisconsin Badgers, Frerker accepted his first coaching job as a goalie assistant coach at Roseau high school.

Bob was lured back to Rochester, Minnesota by Ken Johansson as they met at Bob Johnson and Dave Peterson's camps in Colorado Springs.  Frerker served as the head coach of Rochester Lourdes from 1975-1979.  Eventually, he became head coach of the Rochester John Marshall Rockets in 1985.

Frerker guided his Rockets teams to five section finals in seven years and also appeared in back-to-back State Tournaments in 1988 and 1989.  Rochester John Marshall reached the State finals in 1989 before falling to Bloomington Jefferson.  Retiring in 1992 after seven seasons at the helm of the Rockets, Frerker carried a passion for the game and was a teacher in every way.  Bob is the owner and operator of the family based hockey shop within Rochester - Shoot-n-Save Sports. 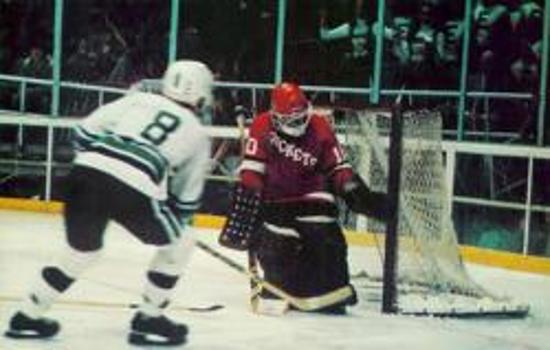 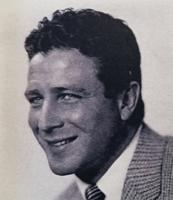 A standout player, coach, official and profesional cartoonist George Karn joined the MHCA Class of 2011 posthumously having passed away in 2000.  An award-winning cartoonist and illustrator, Karn won two Cleo Awards for design animated television commercials, designed the Hamline Piper logo for his alma materm, Minnesota North Stars logo and jerseys - including the mysterious "crooked N" North Stars logo - Minnesota Fighting Saints logo and jersey cresting, Minnesota Kicks soccer logo, St. Cloud State new logo - for his good friend Herb Brooks, several Hobey Baker Award program covers, and was the main artist for the Minneapolis Bruins hockey team of the C.P.H.L. where he designed cover and interior program artwork for the Bruins.  Outside of hockey, Mr. Karn was best known for creating cereal icons for General Mills: The Trix rabbit, the Lucky Charms leprechaun and Count Chocula.  Karn had polio as a child and doctors told him he would never walk again.  Not only did he walk, but during his battle with the disease he began to draw.

Karn grew up on St. Paul's East Side, attended Humboldt High School and Hamline. During the 1950s he taught art at South St. Paul High School. An All-Minnesota Intercollegiate Athletic Conference honoree in football and hockey, Karn lettered four times in both sports as well as baseball at Hamline University, from where he graduated in 1951, and was inducted into the Hamline Pipers Hall of Fame in 1987.

Karn played baseball with the Minneapolis Millers as well as hockey with several amateur and semi-pro teams in the Midwest and coached high school hockey at Cretin, South St. Paul and St. Agnes along with a number of amateur teams. Karn led South St. Paul to State Tournament berths in 1953, 1954, 1955 and 1957.

George Karn passed away sitting at his table in West St. Paul, pen in hand, drawing a caricature of himself.  It was fitting for Karn, 72, to spend his last moments illustrating. 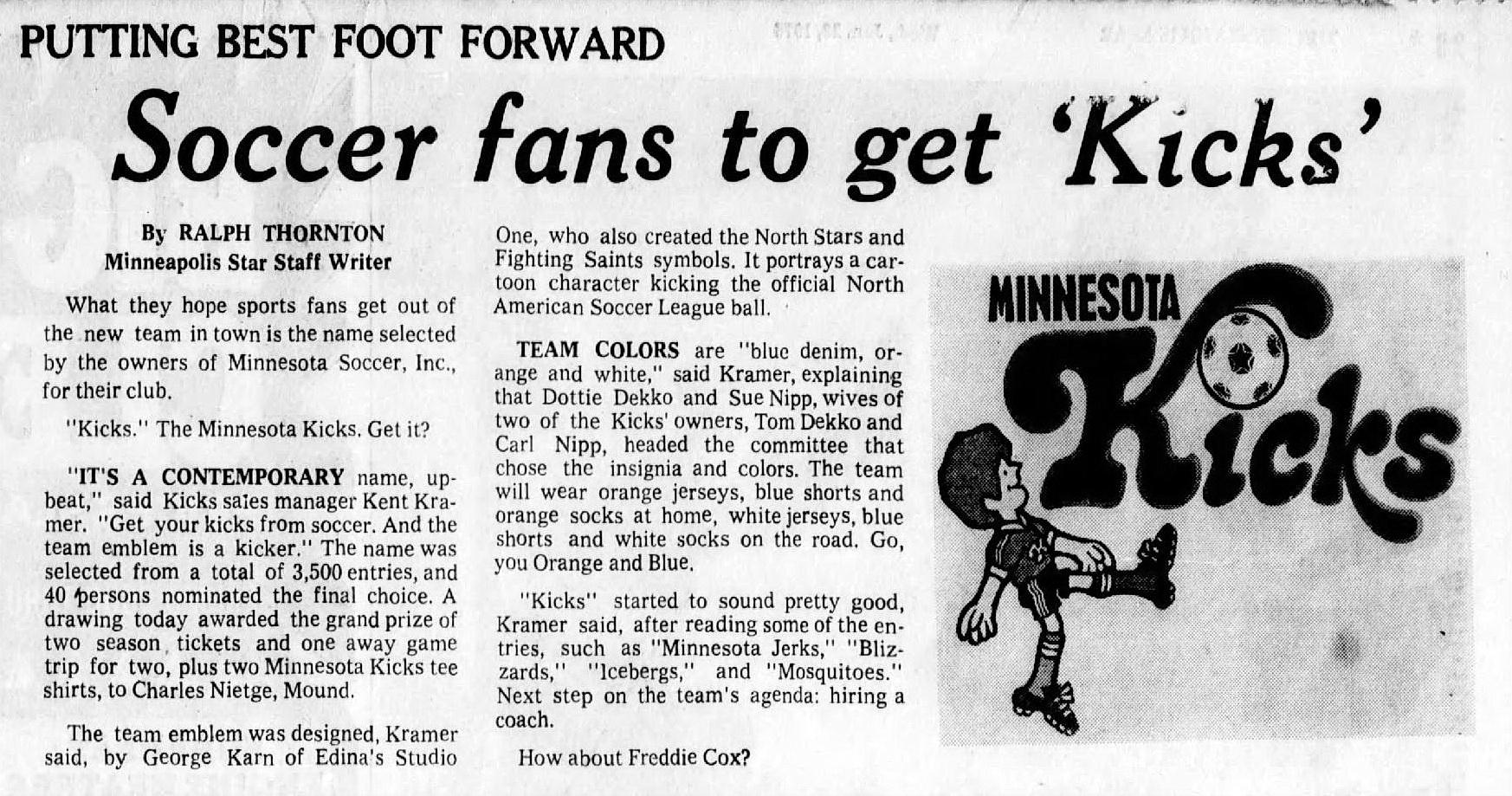 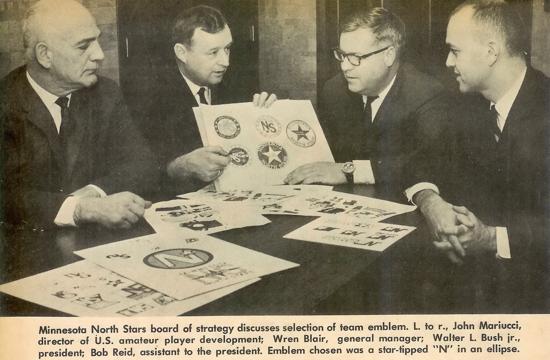 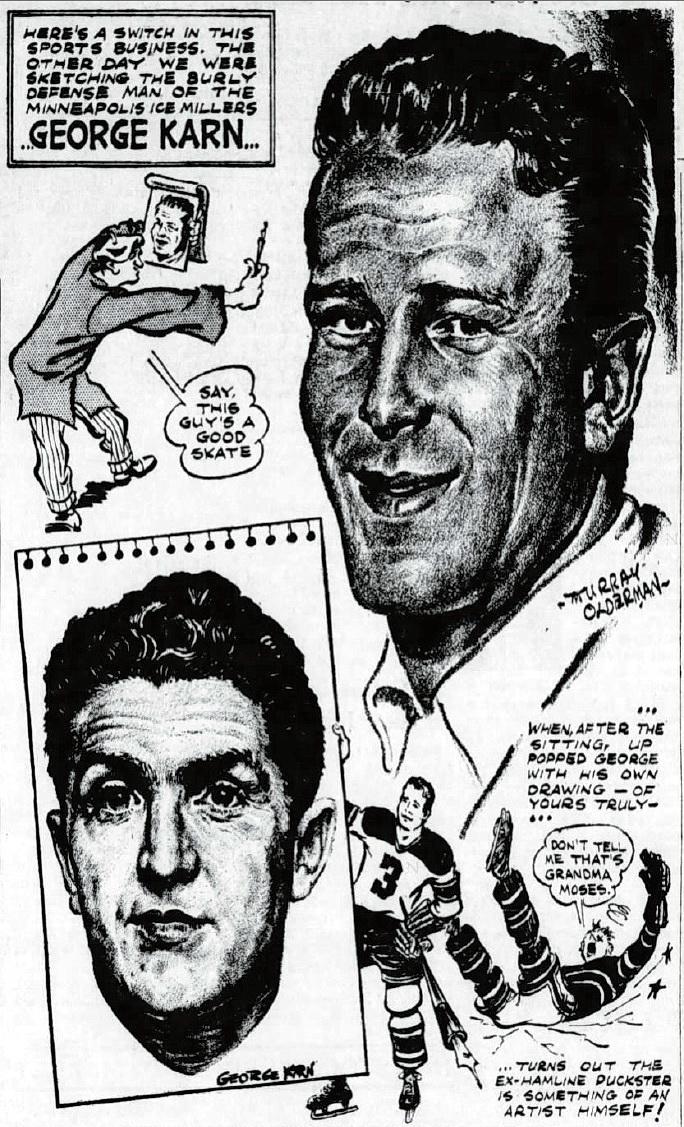 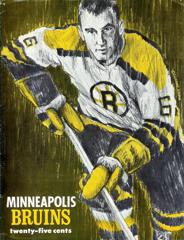 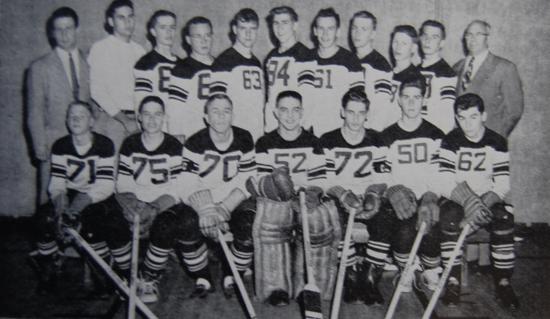 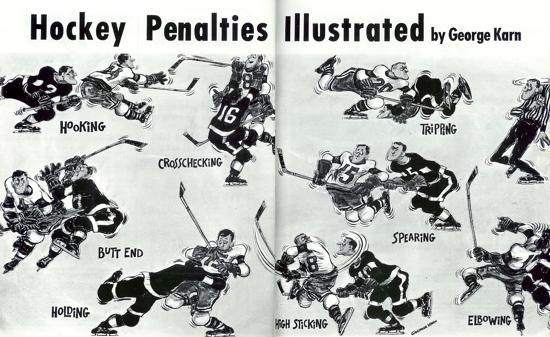 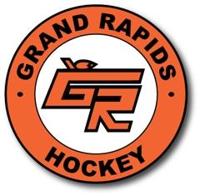 Cliff Kauppi is forever linked to the city of Grand Rapids, Minnesota.  Nicknamed the "Father of Grand Rapids hockey", Kauppi truly is a builder.  Cliff grew up in historic Eveleth, Minnesota and was a member of the Golden Bears where he graduated in 1929.  Mr. Kauppi attended St. Cloud State Teachers College and began work at Grand Rapids high school in 1945.  At that time, basketball was king in Grand Rapids and Kauppi began recruiting and developing players to play high school hockey.  The fruits of his labor paid off as he convinced the school board to add hockey as a varsity sport and in 1949 Cliff guided the first ever team in Grand Rapids hockey history.

True to his form as a builder, Kauppi recognized that Grand Rapids hockey was dependent on the youth level and it needed to be developed.  He handed over the reigns of the varsity team to his assistant so he could focus on building Grand Rapids hockey from the mite level up.  Cliff was key in building a number of outdoor hockey rinks and was instrumental in the building of the IRA Civic Center in Grand Rapids.

"They (Eveleth) would be first in this, first in that, and other communities would follow," the late Kauppi, who passed away in 2003, said in an interview with Grand Rapids radio station KAXE 91.7 some years back.

Kauppi credited the mayor of Eveleth at that time as being instrumental in building the city and advancing it with sports. Eveleth created a buzz for hockey as it was mong the to host organized hockey at the Eveleth Hippodrome. That forward thinking would help fuel Kauppi's desire to build high school hockey at every stop he would make in his career.

"Of course, those range towns, there were a lot of ethnic groups," he said. "Slovenians, Italians, Swedes, Fins, most of them worked in the mines. The greatest place to grow up was on the Iron Range. That time, it was booming except for of course, there was the war (World War I), but after that, there was a lot of money there. It was great, you could go out in the woods, you could swim, you could fish, the community had a lot of play grounds, and the range was lively, it was hard to beat."

Kauppi played for the Golden Bears of Eveleth and went on to play hockey in junior college and at St. Cloud Teachers College. Kauppi played semi-pro hockey in Wisconsin and Michigan and began teaching in 1938 where he took a job at hockey-crazed Williams High School just south of the Canadian border.

Even though the depression had stunted the growth of hockey in Minnesota, and in some cases stopped it completely, there was a run of hockey success northern Minnesota that kept on plugging.

“I was up there four years," Kauppi said. "As far as high school hockey, it was almost extinct throughout the state. I think they played a little in the Cities on a kind of club level. Up there, it was Roseau, Baudette, Rainy River, Warroad, Greenbush, Hallock, and later, Thief River.

“Up there was the first, really organized hockey tournament. Up there they'd started hockey early, being close to Canada. Most games were on outside rinks. They used to get a lot of people. People were tough up there, they were outdoor people. Roseau did have a little rink and that is where we would have our tournament.”

Kauppi returned to his roots on the Iron Range where he took a teaching job at Grand Rapids High School and a similar theme was developing as hockey blossomed wherever Kauppi landed.

At the time, Grand Rapids was known as a basketball school and, through a lot of hard work, Kauppi shared his love of the game with some of his students at an outdoor park by the courthouse in Grand Rapids.

"I know they had a rink by the courthouse,” he mused. “There was not too much activity there, but later on I noticed now these kids were playing and I went down there and I was skating around and these kids, my class asked me if I could get a game. So I said, 'Ok," and some of these kids were pretty good. So, I took them over and played Taconite a couple of times. We got in two or three cars and went over there and they didn't do too bad."

The team was not affiliated with the high school and did not have any equipment. They played with sticks and skates. Kauppi did what he does best, and that is build relationships. He developed one with junior chamber had the golf course.  Kauppi served as the course manager during the summer and talked a lot of hockey. His discussions were able to land funding for equipment.

They went on to play other range towns, and even took a trip or two to Canada to play.  After recruiting kids to play and helping grow the game, Kauppi convinced Grand Rapids school board to add hockey as a varsity sport. In 1949 Kauppi became the first head coach in Grand Rapids history and held that position until 1955.

What is known as Minnesota Hockey today was originally formed as MAHA or the Minnesota Amateur Hockey Association and Kauppi was instrumental in helping form the governing body for the largest youth hockey association in the country.

He saw the game from the beauty which is enveloped by its skating. "I had a lot of fun with hockey. It was a lot of work but a lot of amusing things happened with kids and adults, great experiences."

His experiences and amusements along the way have crafted many memories for kids who have grown and played in Grand Rapids. The numbers speak for themselves, fourteen section titles, three state championships, thirty all-state selections, three Hobey Baker candidates, five Mr. Hockey candidates with one winner, seventeen NHL players, and seventy-five division I players have all been benefactors of Kauppi's efforts in building hockey in Grand Rapids.

Beyond the successes of Grand Rapids lies the joy of the game that has been brought to every player that has played hockey in Grand Rapids and Minnesota. 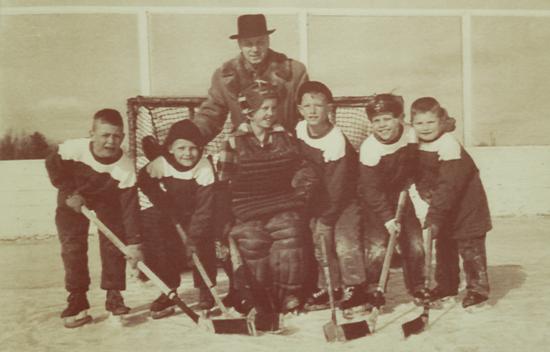 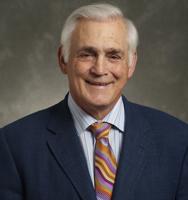 The Minnesota State High School Hockey Tournament is the biggest prep event in the country.  And no one is more associated with the event than Lou Nanne.  Mr. Nanne has been the TV analysyt for the State Tournament since 1964.  The event has changed venues, changed TV stations, and changed formats, however Lou Nanne has been a constant.  One high school coach stated that "it just doesn't feel like the State Tournament until you hear Lou's on-air analysis.  I had watched the event for years and just to hear Mr. Nanne's voice talking about our program and players was truly special".

Lou Nanne is a legend.  He was a star player for the University of Minnesota, a US Olympian, and he enjoyed a successful pro career in the NHL as a player, coach, and general manager.  Lou also served as an important voice in USA Hockey in both an official and unofficial capacity.  He is an author, successful executive, and a devoted husband, father, and grandfather.

Not only has Lou Nanne's presence added to amateur hockey's biggest event, he has been a long time advocate or the Minnesota high school player and grass roots hockey.  Lou has been inducted in both the U.S. Hockey Hall of Fame, and the International Ice Hockey Federation Hall of Fame.  Lou happily adds his induction into the MHCA Hall of Fame to his long list of achievements. 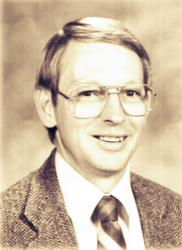 Since beginning his involvement with hockey as a coach and administrator, Ron Sellnow has dedicated 47+ years to the sport in the Hopkins and St. Louis Park districts, as well as working with the Minnesota State High School League, the Minnesota Hockey Coaches Association, Minnesota Hockey and USA Hockey in varying capacities.

A math teacher or the Hopkins School District for 23+ years, he took over as the director of athletics for the district in 1988 and served in that capacity for 11 years.  Ron was named the Class AA Athletic Director of the Year in his final year of 1999.

In 1997, Sellnow served as the Section 6AA Boys Hockey Tournament manager and took on that role for the 6AA Girls Tournament in 1999.  Ron additionally was the Assistant Tournament Director for the Boys State Tournament in 2006.

Rons' involvement with USA Hockey includes 18+ years as a counselor, director and manager for various camps and teams.  His extensive list of honors and awards includes induction into five different Halls of Fame.

In October of 2012, Ron sadly lost his battle with cancer.  He died of lymphoma surrounded by his family at home.  He will forever be remembered for his easy going manner and his willingness to help other people.  He was gracious in all that he did. 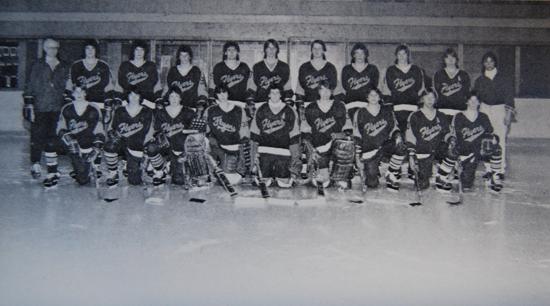