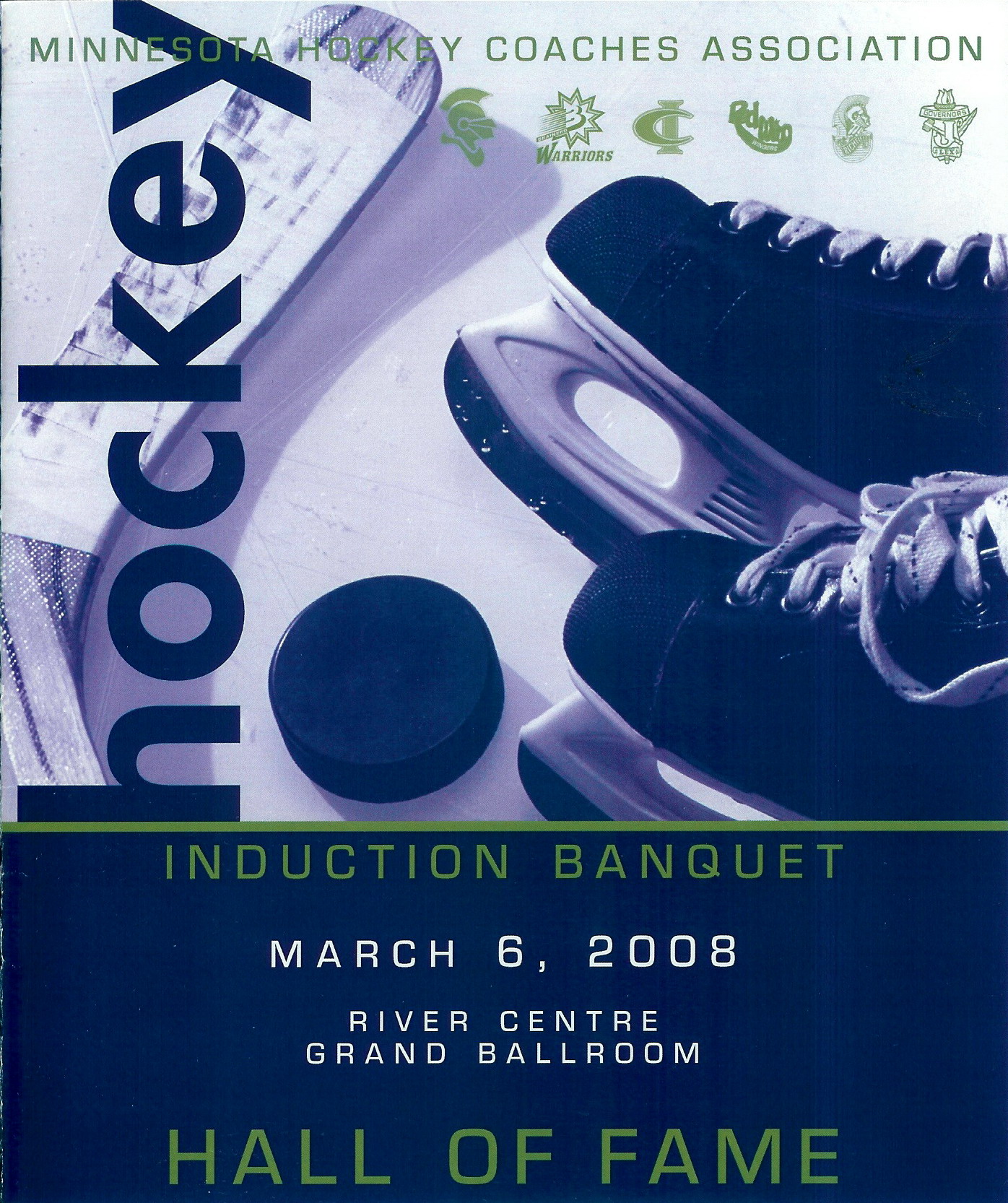 Bucky grew up in St. Paul, and graduated from Washington high school in 1959.  While at Washington, he was selected captain in three sports:  Football, hockey and baseball.  He earned All-City honors in both hockey and baseball.  Mr. Kendig was a member of the 1956 Minnesota State Baseball Championship team.  After a stint in the U.S. Army - where he served in Vietnam - Bucky went onto the University of St. Thomas where he continued playing both baseball and hockey.  He earned All-Conference status in baseball as well as being named captain of both the baseball and hockey teams.

Bucky began his hockey career at the Academy of Holy Angels in 1972 by instituting the boys hockey program when he started the school's first program as head coach - where he remained until 1976. Mr. Kendig then went on to become head coach at St. Bernard's school and coached there until the 1990 season.  In 1990, Bucky joined the St. Paul Johnson hockey family and remained on staff through 1998 coaching alongside MHCA Hall of Fame inductee Vic St. Martin.

Behind every great coach, is a great family.  Bucky's family includes his wife Phyllis, son Eric, and daughter Tina. 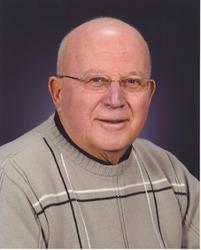 Vic grew up in the Como Park area of St. Paul.  Vic came from a family of 9 children and first played the game of hockey at age 5.  Growing up in St. Paul at this time allowed him to compete with Herb Brooks among others from the great Phalen park teams.  Vic went on to Cretin high school and played hockey for 4 years including being named captain his senior year of 1955.  Upon graduating Cretin, Vic went on to the College of St. Thomas were he played hockey for 4 years and was also the captain his senior year.  Mr. Martin played many years of senior amateur hockey after his college years.  When Vic realized his dream of playing pro hockey was not going to happen, he chose teaching and coaching as a career.

Vic had some very good teams at Benilde in the late 1960's and won 2 conference titles.  Vic went on to start the hockey program at Tartan high school in 1970.  St. Bernard's also had many strong teams in the 1980's with a number of conference titles.  While at St. Paul Johnson, with Bucky Kendig from 1990-1993, the Governors were able to win three conference titles. They went to the State Tournament in 1991 at the St. Paul Civic Center, participating in the last year of the one class hockey tournament.

"I want to give special thanks to my high school coach Mr. Ted Joyce and my college coach Mr. Ken Staples.  They inspired me to choose coaching as a career.  Additionally, I want to thank all of my former players and co-coaches, especially Bucky Kendig and Larry Fronczak."  "I always looked at coaching as an extension of teaching.  I enjoyed seeing young men improve. Coaching gave me an avenue to teach life-long skills, and I never got tired of going to the rink". 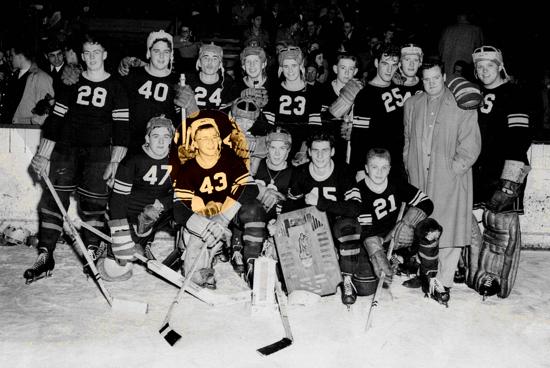 Jake McCoy grew up in Minneapolis, his early experiences in the game of hockey were on the ponds and outdoor rinks of South Minneapolis.  He played high school hockey at DeLaSalle, and college hockey at the University of Minnesota.  Jake was a member of the 1964 United States Olympic Hockey Team.

Jake had a rich 50+ year coaching record in both the youth, and high school hockey ranks.  He started in South Minneapolis after one of his mentors, Dick Erdall, got him involved in coaching a bantam hockey team in 1960.  Jake spent 33 years as a physical education teacher in Richfield, Minnesota.

Jakes coaching career was as follows:

Jake has had the privilege of working with some wonderful coaches who all have had a great influence on him as a person and as a coach.  Including his own youth coaches; Jack Marion and Dick Erdall, shaped the way he lived, played and coached himself.  Dick and Leda Bouchard gave Jake guidance and friendship as a young teacher and coach at Richfield high school. Larry Hendrickson gave him the chance to be a high school assistant coach, Todd Olson, Willie Spelts, and Steve Sertich provided many memorable practices and games at Richfield.  Mike Thomas, along with his wife Sue, were very good friends outside of hockey - Mike taught him that "hockey is a great game and to enjoy the kids to the fullest" - which Jake certainly did. The kids themselves are the reason he coached, and as Jake stated "I have been so lucky to have had so many wonderful players over the years".

Among the many memorable moments that Jake remembered were:  "The two most vivid memories were the two State Tournament teams I helped coach at Richfield. The 1975-1976 team led by Steve Christoff, and the 1990-1991 team led by Darby Hendrickson".

In addition to the above mentioned coaches, friends, he also recognized the following people:  "A special thanks to my family for all of their support through the many years, my wife Kathy, and three children, Jeanne, Patrick and Maggie.  My Father Ken, and Mother Lucille who brought my Brother Fred and I up in a family devoted to sports.  Gene Olive and Bob Collison for giving me the chance to teach and coach at Richfield, and Mike and Sue Thomas for a life filled with wonderful memories.  The best place in the world to be is at a hockey rink because for me the wonders never ceased". 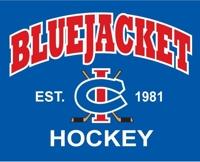 Bill grew up in Ely, Minnesota and played high school football, hockey and baseball.  After graduating in 1963 he went on to play hockey at Bemidji State University.

In 1969-1970 he started teaching at Cambridge senior high school.  It was somewhat disappointing to him that the school did not have a hockey program, but he was hired to teach and coach baseball.  When teaching summer school in 1969, there were a couple of students who approached him about helping them to "get a hockey program started at Cambridge". Bill became involved with starting a hockey association, and also in building a rink.  The first year they were able to get a squirt, peewee, and bantam teams, and shortly thereafter mites and midgets were added to the association.  The midget team allowed all high school kids to play and he started coaching those kids.

After coaching midgets for 10 years, and having high school hockey turned down by the school board 2 separate times, it finally was approved as an official high school sport in 1981.  The parents, through donations and fund raising, financed most of the program the first couple of years, and Bill and his volunteer staff coached without a salary.  They traveled to practice 20 miles on way to get an hour of practice twice a week.  Otherwise they practiced outdoors and did lots of dryland training.  They traveled for practices and games or 17 years, in which Bill drove the bus for practices.  He served on arena committees from 1976-1998, when the city of Isanti erected an arena.

Bill had the fortune to be named Section Coach of the Year in 1992 after Cambridge-Isanti won the Section, and earned the opportunity to play in the State Hockey Tournament that year.  Additionally, Bill assisted in coaching duties in the Maroon & Gold High School Series.

Bill's family was very instrumental in his passion to achieve the goals that were reached.  His wife Patty was very supportive, and sacrificed for Bill to be able to coach, and serve on the numerous committees with the Cambridge-Isanti hockey program. "The great relationships developed over the years with players, parents, coaches, officials, etc. have been one of the most rewarding parts of the game he continued to experience long after retirement coaching Mites, and supervising at high school games."  "It would not have been possible to coach as long as I did without the good and loyal assistants in: Dave Roddy, Mike Anderson, Mike Hall and Mark Bezek - Thanks to these gentleman".