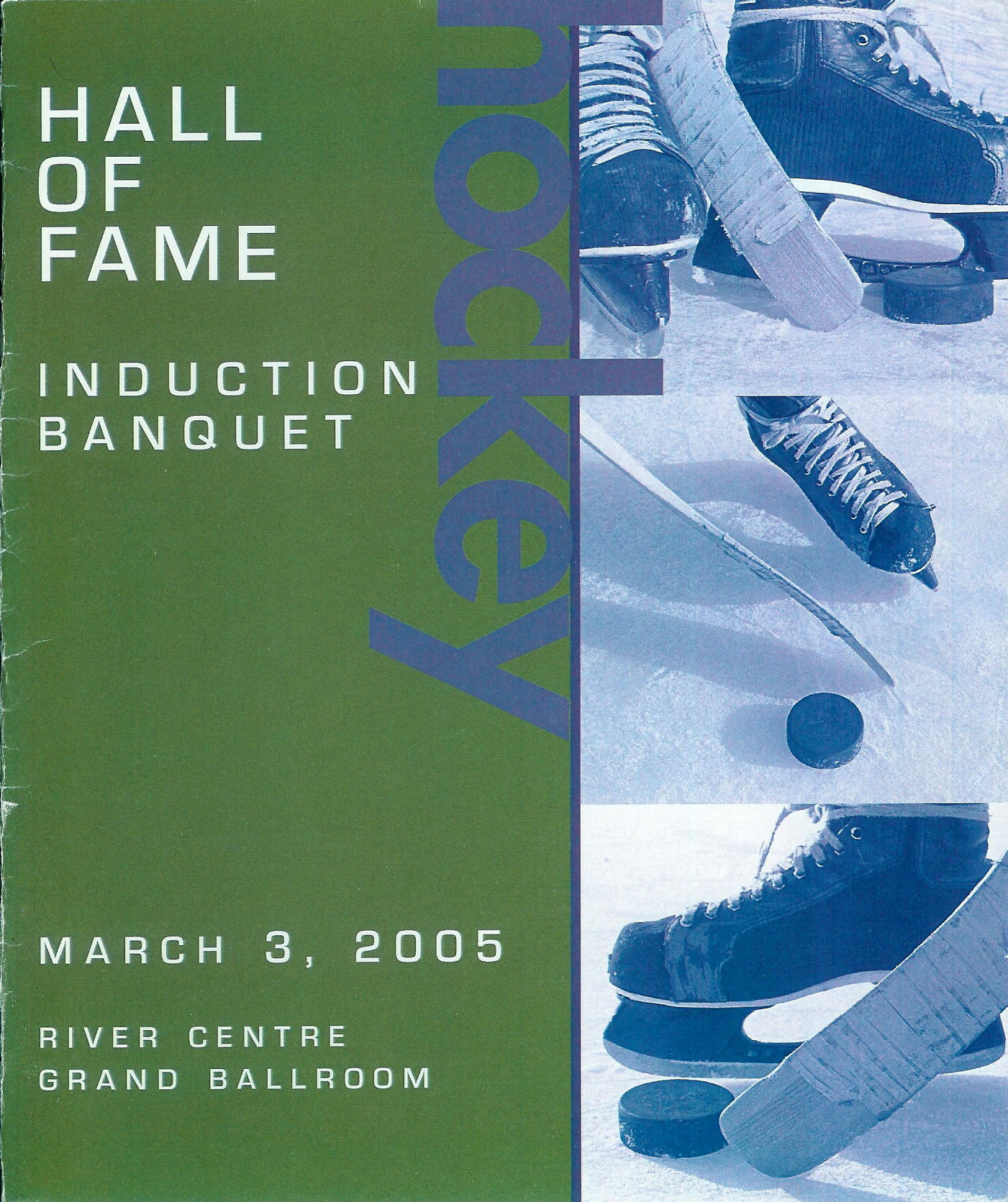 Bryan Grand grew up in the hockey town of Roseau Minnesota end graduated from Roseau High School in 1966.  While in Roseau he participated in baseball, hockey, and football from the years 1963 to 1966. His Roseau teams also participated in four state hockey tournaments in a row from 1963-1966. Following graduation from Roseau, Bryan attended the University of New Hampshire in 1967.

Following a year at New Hampshire he attended Bemidji State University from the years 1968 to 1970.  While at Bemidji he played on three straight NAIA championship teams. He received his Bachelors degree in science in 1970 from BSU and later earned his Masters degree in Mathematics in 1987.

Coach Grand began teaching science and coaching at Bemidji High School in 1970 as an assistant coach until1976. He took over as the Head Hockey Coach in 1977. During his time as an assistant coach, Bemidji went to the State Tournament in 1972, 1973, 1974 and 1976. Bemidji finished as the state runners-up in 1974. As Head Coach the Lumberjacks took trips to State in 1985 and 1986, and took home the Consolation Championship in 1986. Coach Grand was awarded the Section 8 Coach of the Year Award in the years 1984 and 1990. He lists his favorite memories as “I will always remember how much fun the kids had playing, and the lifelong friendships that were developed through hockey. Having my two sons being a part of my years coaching was very special to me." 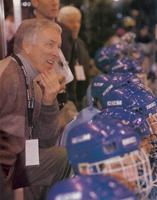 Tom Saterdalen grew up in southern Minnesota and graduated from Rochester John Marshall in 1960.  He lettered 8 times in high school in hockey, baseball and football. From Rochester Tom attended Bemidji State University and graduated in 1964.  While at BSU, Tom played hockey and tennis and captained both teams his senior year.

Coach Saterdalen began his coaching career with stints as an assistant coach at Cloquet in 1964-1965 and Bemidji State in 1965-1966.  In 1966 he accepted the Head Coaching position at Superior High School in Superior Wisconsin.  During his tenure at Superior he won two State Championships (1968-69 and 1969-70).  After leaving Superior in 1970 Tom took a position as an assistant hockey coach at the University of Minnesota.  He stayed as an assistant for three seasons at Minnesota before becoming a teacher and the Head Hockey Coach at Jefferson High School in Bloomington.  Tom was the head coach at Jefferson from 1973 until 2002.  While at Jefferson he accomplished the following:  13 Lake Conference titles, 15 section titles, 5 State Championships, 3 third place finishes.  Jefferson teams played in the section championship games in 23 of 26 years while Saterdalen was the Head Coach.

Coach Saterdalen’s career hockey coaching record was 703-228-28 overall with a record at Jefferson of 545-167-21. While at Jefferson he sent 65 players to Division I hockey, 80 to Division II, 19 to professional hockey and 7 to the National Hockey League.  Tom stated that 3 straight state titles, 60 games without a loss from 1992-1994 and playing in the finals for 23 of 26 years while at Jefferson were his career highlights.  He went on to say “without great assistants, especially John Bianchi and Mike Thomas, none of this would have been possible.”

Bill Vukonich was born and raised in Duluth Minnesota.  He played his youth hockey in the Duluth Amateur Hockey Association and attended Duluth Central High School from 1960-1963. Bill played on the Central team during his junior and senior seasons.

In 1969 Coach Vukonich graduated from the University of Minnesota Duluth with a B.S. degree and later earned his masters degree from Oregon State University in 1973.  Following his college education Bill taught in Springfield Oregon for 2 and a half years then moved back to Duluth where he was a teacher for 32 years. Teaching stints in Duluth included II years at Morgan Park High School (until it closed in 1992), 1 year at Washington Junior High and the final 20 years at Duluth Denfeld High School. Bill was an industrial tech teacher and work experience teacher during his career in education.

Coach Vukonich’s teams made appearances in the State Tournament in 1986, 1988 and 1989. His teams finished third in 1986 and 1989 and were the Consolation Champions in 1988. Bill was awarded the Section 2 Coach of the Year Award in both the 1988 and 1989 seasons as well as the Minnesota High School Hockey Coaches Association Coach of the Year in 1989. He also had the opportunity to coach team Minnesota at the Hockey night in the Boston Tournament in 1989.

Bill commented, “I have many great memories from my years of coaching hockey.  I’ll always remember the excitement and pride the players felt during the State Tournament appearances, and how hard they worked together as a team. We did have some successful years on the ice. Fortunately we had some hard working players who worked together as a team and never gave up. For a coach, winning games are important, but I remember the people much more than the scores of the games. We had some very hard working, dedicated team players, great assistant coaches and reliable team managers.  We had some great times.”

After retiring from teaching Bill and his wife Karen moved to the Brainerd lakes area. Summers are spent working part time at the Cuyuna Country Club Golf Course.  “Since retiring, I an able to spend more time pursuing some of my hobbies and interests as well as spending more time with my family.” Bill has two children; Michael is a financial planner and lives in Phoenix with his wife and two sons.  His daughter lives in Plymouth and teaches first grade in the Osseo school district. 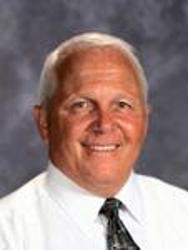 Jeff Whisler was born and raised in North St. Paul, and was the youngest of five children. Jeff began his hockey paying career in the North St. Paul Hockey Association and continued his high school career at Hill-Murray from the years 1973-1976. While at Hill-Murray he earned three varsity letters in football, 4 in hockey and three in baseball. He was an all-state player in both hockey and baseball during his senior year.

Following his graduation from high school he attended Providence College on a hockey scholarship and was able to play for four years under New Jersey Devils GM/President Lou Lamoriello. Jeff prayed in 127 consecutive games while at Providence and earned his degree in special education. He later earned his masters from the University of St. Thomas in community education. Jeff began his coaching career in 1980 as an assistant at Providence and stayed in that position until 1982.  In 1983 he began his head coaching career at Lincoln High School in Lincoln Rhode Island.  Jeff then came hack to Minnesota and took over the Head Coaching position at Mahtomedi H.S. from 1983 to 1986.  In 1986 Jeff was named the head conch at Hill-Murray H.S. and served in that position until 1991.  Jeff returned to Mahtomedi in 1991 and began his second stint there until 1997.  He is currently the Head Junior varsity girls coach at Mahtomedi H.S. as well as the Activities Director.

Coach Whisler listed his career highlights as 5 State Tournament appearances including two at HiIl-Murray in 1987 and 1991 and three at Mahtomedi in 1992, 1994 and 1997. His Hill-Murray teams were runners up in 1987 and State Champions in 1991. He stated about his 1991 team that; “they were not the most talented team in the State Tournament, but they believed in themselves and worked towards a common goal.”  His 1994 Mahtomedi team was also the Class-A third place Champion.  He also received individual recognition with the section 3A Coach of The Year award in 1994 and 1997 as well as the Section 3A Coach of The Year in 1991 (Hill-Murray One Class).  In 1991 he was also named the John Mariucci Award winner as the Coach of the Year from the Minnesota H.S. Hockey Coaches Association.

When asked about his favorite memories Jeff stated, “I was thankful for my three hockey coaching mentors, Andre Beaulieu, Terry Skrypek and Lou Lamoriello. They are the reason that I chose to get into coaching. They all had a tremendous impact on my life and I wanted to do the same with the athletes that I worked with. I also enjoy having my former players as coaches who call me for advice.”  He also will never forget receiving the tragic news that one of his former players, Pat Schaffhauser, was seriously injured during a professional game in Switzerland.  Finally Jeff stated, “My most vivid memory is the support that I have received over the years from my wife and three daughters.  I would never have achieved success without the love, support and encouragement of my wife of twenty-five years, Dawn and my three daughters, Erin, Jeanne and Anne.