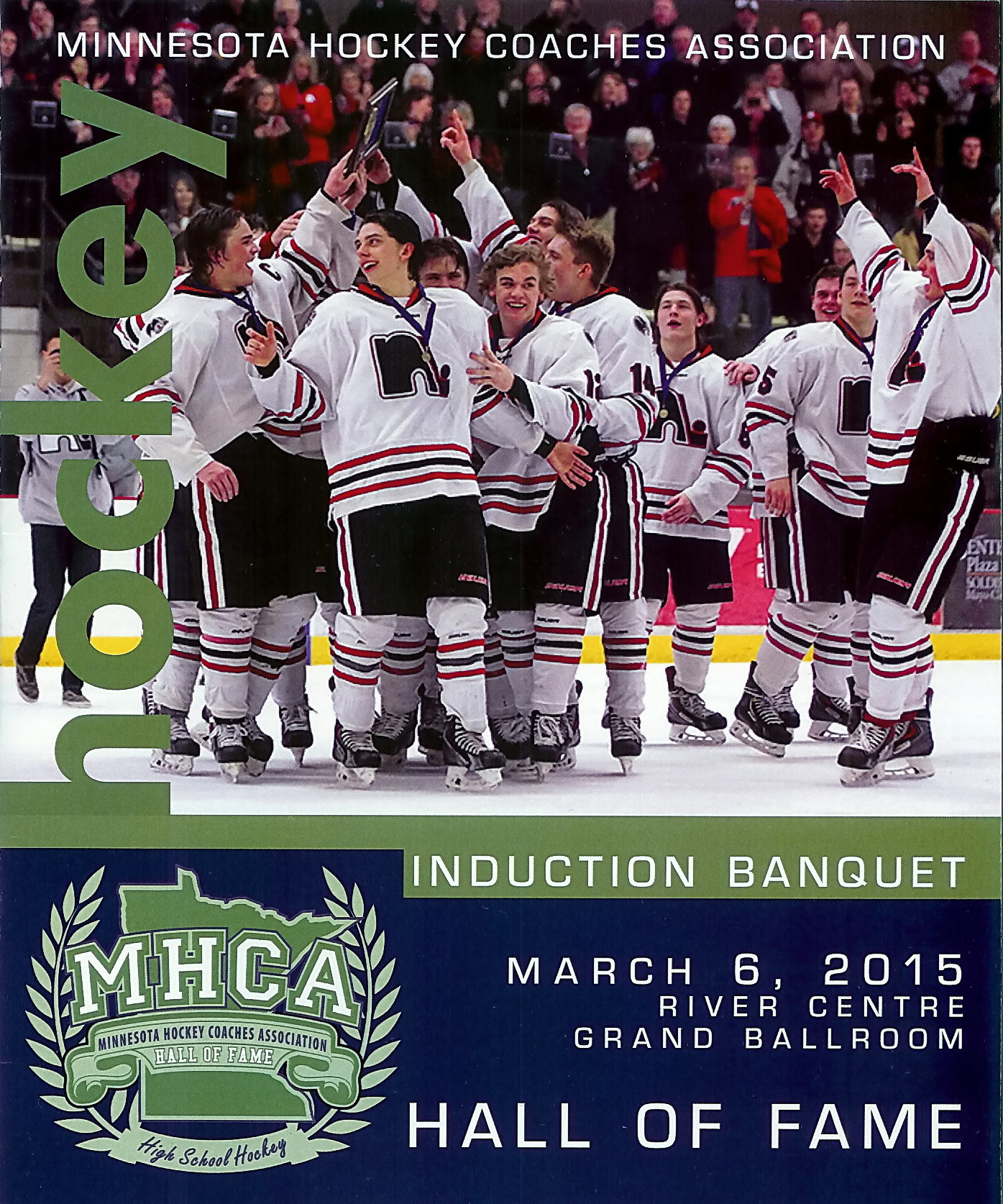 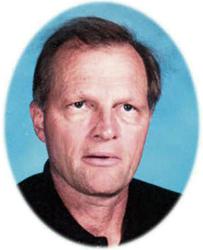 Rick Alm grew up in South Minneapolis the third of six hockey-playing brothers during the glory days of Minneapolis hockey.  The Alms and the other neighborhood kids would make their way to Riverside Park where they would descend the hill and play pickup hockey all day before scaling the enormous hill on their way home for supper.  Former teammate Jim Westby told the Star-Tribune:  “It was 150 steps down to the ice rink.  It was a hard climb after playing hockey for five, six hours on a Saturday, but it was worth it.”

The payoff came when Rick’s Minneapolis South teams went to the state tournament twice (’55 & ’57), finishing in third place in 1957.  The 1955 team played in one of the state’s most historic games, defeating Thief River Falls by a score of 3-2 in 11 overtimes.

Rick Alm went on to play hockey at the University of Minnesota as did four of his brothers.  Rick’s coaches at the UofM included legendary coaches: John Mariucci and Marsh Ryman whom were all great mentors and helped shape his coaching philosophy. They enjoyed success on the ice as well, earning a spot in the four-team NCAA Tournament in 1961.

After graduation, Alm stayed active as a player traveling the region as a member of the Minneapolis Bungalows Senior Amateur team with, among others, two-time Olympian Dick Meredith.  Rick was a fixture on the Bungalows for the next decade.  In 1964, Alm was named the second head coach of Centennial High School.  He coached there for three years, then moved on to become the head coach at Minneapolis Vocational HS.  After two seasons Alm was forced to resign.  He was holding a position in the school’s Work Experience Program and his boss wanted him available 24 hours per day.  So, Rick became a hockey referee for two years.

In the Fall of 1971, Alm returned to his alma mater to coach the South Tigers.  He worked endlessly trying to restore the team to the glory days he knew growing up in the ‘50s.  Finally, after 22 years, in 1993, Minneapolis South earned a spot in the Tier II State Tournament.  It was the first trip to the state tournament for the Tigers since 1957, when Rick Alm was a senior in high school.

Coach Alm retired after that magical season.  While his coaching wins and losses have long been forgotten, his legacy as a player and coach remains intact. 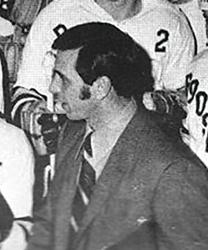 If you’ve overheard someone telling the Bucky Freeburg story you might think they were describing a character from one of the Mighty Ducks movies.  For starters, he grew up playing on the rink at Riverside Park with Rick Alm and his five brothers but never joined an organized team until his sophomore year in high school.  That team was the Minneapolis South Tigers and all they did was go to the state tournament in Freeburg’s junior and senior years.  South took 4th place in his senior year but one can hardly blame them for losing their last two games.  Their quarterfinal matchup with Thief River Falls went 11 overtimes before South prevailed 3-2.  Following his high school career, Freeburg went on to play at St. Cloud State University where he captained the team in 1959.

Bucky got his first coaching job at Minneapolis Roosevelt in 1964 when he took over the sophomore team.  He led the sophs for two years before being named the head varsity coach in 1966.  He would stand behind the Teddies bench for the next 20 years, leading them to state tournaments in 1967, 1974, and 1978.

Along the way, Freeburg developed a reputation for developing defensemen.  The 1974 squad featured Reed Larson and Mike Knoke.  Larson starred for the Gophers before playing over 900 games in the National Hockey League.  He was selected to play in the NHL All-Star game three times.  Knoke played for Colorado College and the Gophers.  The 1978 team featured three defensemen that would move on to play Division I hockey.  Marc Pettygrove played for Colorado College and Jay Larson followed his older brother Reed to the University of Minnesota.  But, the star of the group was Mike Ramsey who played one year with the Gophers before starring for the 1980 Miracle on Ice team.  Ramsey went on to play over 1000 games in the NHL and was selected to four NHL All-Star teams.

Freeburg retired from coaching following the 1986-87 season, or at least he planned on it.  He took a job at Minneapolis Southwest, planning on teaching physical education but was recruited as a volunteer hockey coach.  He moved on to being an assistant coach on the varsity, then became the head coach for three seasons.

Coach Freeburg spent 30 years working with high school hockey players in Minneapolis.  In addition to those duties he was also the head tennis coach at Roosevelt and Southwest for the entire time.  He retired after the 1994 season. 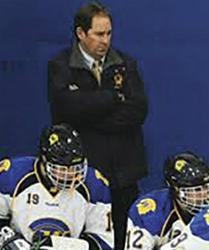 Carl Davis might not have been born to coach but after playing high school and college hockey for two of the game’s giants, he was certainly well prepared for the coaching profession.

Davis grew up in Bloomington, MN and arrived at Jefferson High School about the same time as Coach Tom Saterdalen who would eventually make the Jaguars a fixture at the state high school tournament.   While the dominant Jefferson teams were still on the distant horizon, Davis impressed another coaching legend enough to earn a scholarship to Mankato State University.  There, Coach Don Brose was on his way to amassing 540 career wins.  At Mankato, Davis was a two-time captain and three time Hustle Award winner leading the Mavericks to third-place and runner-up finishes in the NCAA Division II tournament his last two seasons.  A speedy forward, Davis scored 138 points in 132 career games with the Mavs.  “Carl was one of the best skaters we ever had in the program,” Brose said. “He was one of our smartest players and just, overall, an excellent leader.”

After his playing career, Davis dove right into his coaching career, taking over the fledgling Buffalo High School program. Success in new programs requires patience and Davis took his lumps before finding success in Buffalo.  His Bison teams would win only 20 games total during his first four seasons. Once Davis’ program had time to gain traction, success came in bunches.  The Bison reeled off six straight winning campaigns and two Suburban West Conference championships. In all, he would coach 15 seasons in Buffalo compiling 141 wins.

In 1995 Davis accepted the head coaching position at Wayzata HS where he would patrol the bench for the next 16 seasons, leading the Trojans to 247 wins.  Despite playing in the state’s toughest conference, Davis’ teams won five conference championships and earned a berth in the 2004 Class AA Minnesota State Hockey Tournament.  It was the school’s first trip to the state tournament since 1954.  During his tenure Davis developed 39 players that went on to play college hockey, 17 of them at the Division I level.  Six players went on to play professionally.

After 31 years of running hockey camps during the warm months and coaching high school hockey during the cold ones, Carl hung up the whistle in 2011.  He and his wife Karen have been married for 34 years. They have two boys: Kyle and Kurt. 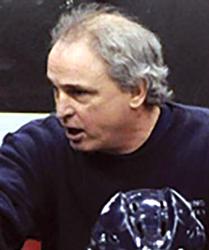 While attending high school in Grand Rapids, Mark DeCenzo played hockey and baseball, helping to lead both teams to the Minnesota State High School Tournament in 1974, his senior season.  In baseball he was a fleet-footed center fielder that flew around the bases on offense and tracked down fly balls in the gaps while on defense. But, hockey is where DeCenzo truly excelled.  A shifty center, he garnered All-State honors his senior season while leading Grand Rapids to a third place finish in the state tournament.  At the tournament his efforts were rewarded when DeCenzo was named to the All-Tournament team.

Following his high school career, Mark accepted a scholarship to Michigan State University to play for legendary coach Amo Bessone.  He was a four-year letterman for the Spartans and served as team captain his senior season.

Following his college career, DeCenzo returned to Minnesota and accepted a teaching position at Apple Valley HS.  There, he served as an assistant coach to Larry Hendrickson for two years, then assumed the reins as head coach before the 1983-84 season.  Over the next 10 years DeCenzo would lead the Eagles to two conference championships, six section title games, and two state tournament appearances.  His 1991-92 team was consolation champions.

In 1993, DeCenzo left Apple Valley to return closer to his northern Minnesota roots when he was named the head hockey coach at Hibbing High School.  While there, he continued his record-breaking string of success behind the bench.  During a 20 year run DeCenzo-led teams made it to the section finals an astounding 13 times.  Four times the Bluejackets reached the state tournament finishing 2nd, 3rd, 4th, and 5th.  He was twice awarded the John Mariucci Award as Coach of the Year in Minnesota – once each for Class AA and Class A – in 1997 and 2011.

In a 30 year career coaching high school hockey, DeCenzo amassed over 450 wins, led teams to six state tournaments, reached the section title game 18 times, was selected as Section Coach of the Year nine times, and developed numerous college players.  DeCenzo was also elected to the Grand Rapids High School Hall of Fame in 2013.  But, despite all the awards and accolades, the thing that makes DeCenzo most proud is his family.  Mark’s wife Carolyn raced the kids to activities for two decades so that Mark could concentrate on coaching and it paid off.  Their daughter Dana graduated from UW-Superior with a teaching degree, son Anthony graduated from the University of Vermont with a business degree, and son Nick played hockey for West Point.  (Both boys followed their dad’s footsteps playing Division I hockey).