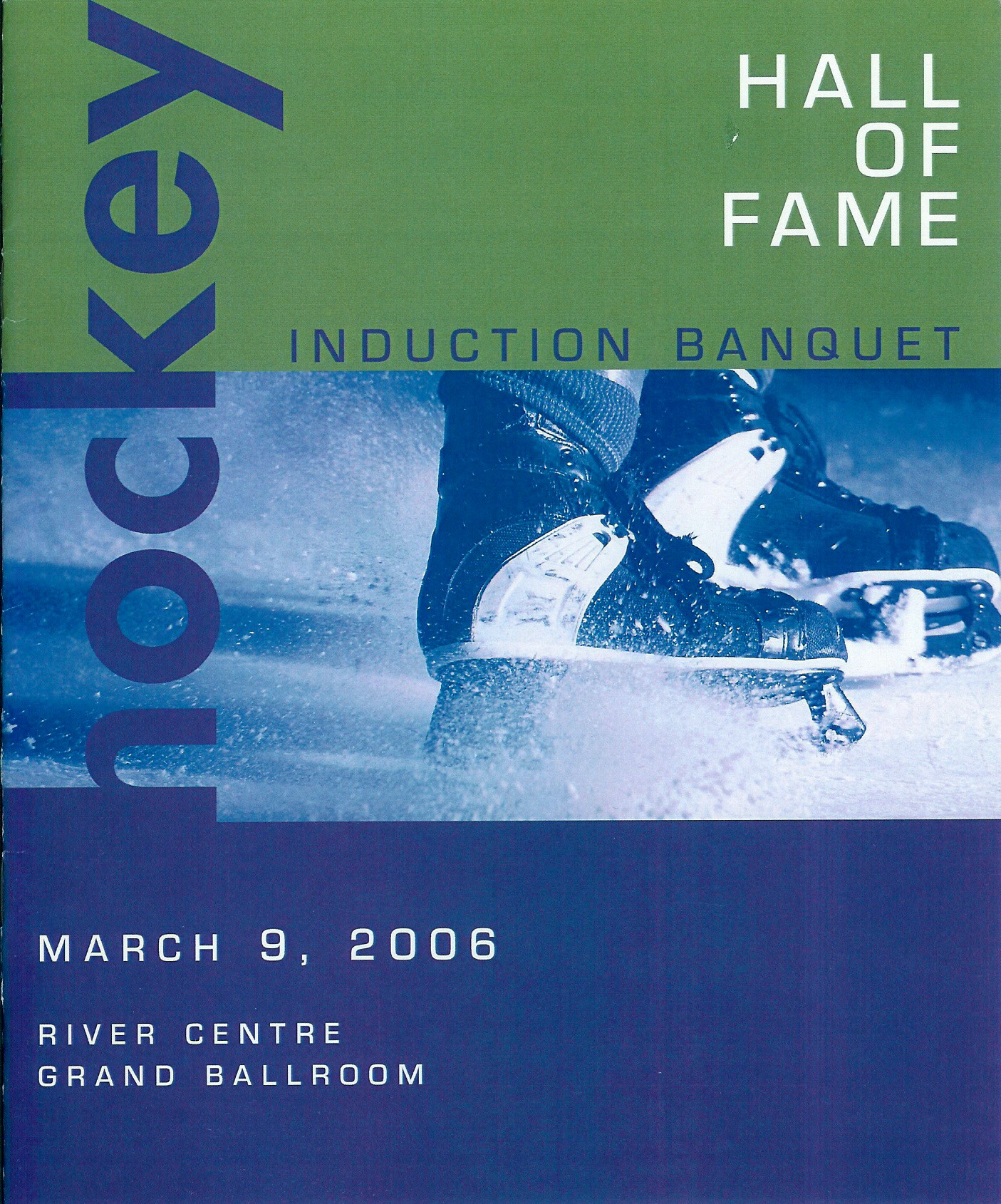 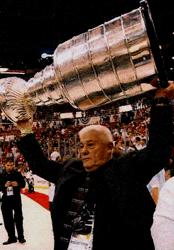 Chuck Grillo felt he "doesn't have the longevity that qualified him for his MHCA Hall of Fame honor, saying it was a very humbling experience". Chuck had the unique opportunity of participating in 11 state tournaments in hockey and baseball as an assistant and head hockey coach at Bemidji High School.  This, along with serving his country in he Marine Corps, are some of the most memorable moments of his life.  Chuck was one of the builders of two programs in Bemidji and Rosemount High Schools with countless hours spent in the youth programs.  He is equally proud of building the Greenhaven outdoor rink in Hibbing, MN with his father, Dominic Grillo and neighbor, Matt Berklich in 1954.  This rink continues to be the foundation for young players to develop.

He's had the opportunity to run elbows with the people who have an  unbelievable net worth. Mr. Grillo in convinced that they have no more net worth than Dominic and Doris Grillo.  All the money in the world would never replace their old fashion value system.  Their "quiet gift of giving" has provided opportunities or countless young men and women to form relationships, create memories and develop their philosophy of life at the Greenhaven Rink. Mr. Grillo can't think of a healthier atmosphere.  "This environment is why I am doing what I do.  Ironically the formal education my parents thought I needed so badly had less to do with my present position in life rather than their old fashioned value system and that warming shack with the pot-belly stove.  The education opened some doors and I am grateful for that".

"My parents epitomize the foundation of our country.  They are two very special human beings who feel they were put on this earth to serve others and they have been exceptional in devoting their lives to that cause. Unfortunately there aren't many like them around anymore.  This is why our country and so many communities are going to suffer".  Mr. Grillo dedicated his MHCA Hall of Fame induction, to his parents.

Mr. Grillo career in high school was cut short because of his aspirations to be part of the NHL, a life-long dream of his. Chuck chose to have what amounts to a twenty-five year NHL career in management, scouting and development.  He forever reminds his players to set their aspirations high, so his players understood why Mr. Grillo chased his dream in the same manner he asked them to chase their dreams.  Personal and professional growth has always outweighed winning and losing.  Chuck was a 40-year-old teacher in Rosemount when he sent handwritten letters to six NHL general managers detailing his interest in a professional scouting career.  He got two responses - Lou Nanne of the North Stars wrote to say thank you, but Grillo just didn't have enough experience.  But Craig Patrick of the Rangers called.  He wanted Grillo to come to New York.Grillo, a teacher of 14 years, met with the school board later and asked for a five-year sabbatical.  The board convened and returned with its decision.  It was a "No" and Grillo replied,  "You pay me to stand up in front of a room of children and tell them to chase their dreams," Grillo told the board. "If I fail to do that, what kind of coach would I be?  You leave me no recourse. I have to do what I've asked kids to do - So I quit".

Like so many others, Mr. Grillo has been blessed with a wife and children that empowered him to chase his dreams.  Chuck is forever grateful to his coaching partners, players and parents he had the opportunity to work with.  People like Herb Brooks, Craig Patrick, Larry Ross, George Gund, and Dan Summers who all went out of their way to help him advance in the game. Players have a way of "making your career" and that is exactly what happened to him.  Mr. Grillo had memorable experiences with the likes of Gary Sargent, Earl Sargent, Bill Israelson, Bill Hemmelright, Keith Hanson, Andy Kannenberg, Tom Reise, Mike Langley, Ernie Blackburn, Ralph Lovering, Jon Quisgard, Mark Manney, the Howe brothers, Eigner brothers, Rob Grillo, Dino Grillo and so many others.  Doc Delcastillo joined his sophomore year and remained a loyal friend and colleague.  Mr. Grillo's memories also include the countless number of coaches, most still active in the game today, that he has had the opportunity to work with.  "It has been gratifying to see them move on and up in the game."  Then their have been all of the draft picks that remain a part of his life. 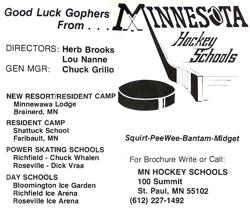 While working in the NHL, Mr. Grillo maintained his obligation and responsibility to Minnesota players from Mites to the Professional levels. "We have been able to play a significant role in many lives through our friendship, teaching, guidance, discipline, uniqueness, unbiased beliefs and unconditional love and respect for the players we come into contact with". His Minnesota Hockey Camps resort and training center, founded with coach Herb Brooks, continues to be one of the most widely recognized training camps in the hockey world.  They are an extension of amateur and professional programs world wide, with their grass roots camp in Minnesota.

We all share one basic psychological need; "We want to be recognized and like for our effort and things we do well". Coaches, players, parents and fans share this common bond.  Mr. Grillo thanks the coaching fraternity for recognizing him in time for his parents to enjoy one more good thing in life.

Mr. Peltier attended the University of Minnesota, earning a Bachelor of Arts in American Studies and graduating in 1969. While at the UofM, Skip played hockey for two legendary Gophers coaches - John Mariucci and Glen Sonmor.  Upon graduation from college, Skip entered the Army Reserve and served one year of active duty.

He started his teaching and coaching career at LeSueur high school where he started the boys hockey program in 1971. He also spent that year as a volunteer coach with the men's hockey program at Gustavus Adolphus College.

In 1972 Mr. Peltier began his career with South Washington County Schools.  For six years, he was a social studies teacher and coach at Park high school - five of those years serving as Head Hockey Coach.  In 1978, he was named Assistant Principal at Park and served for two years.  Skip began his athletic administration career in 1980 when he was named the District Athletic Director for South Washington County Schools, serving two high schools and two junior highs.

Starting in 1985, Mr. Peltier began a 20-year career with the Minnesota State High School League (MSHSL).  During his tenure, he worked with many activities of the MSHSL - fine arts, boys and girls soccer, wrestling, boys basketball, boys and girls hockey, and boys tennis.  Skip was the MSHSL staff member who was the point of contact for member schools and athletic administrators regarding all eligibility issues.  He also served as the liaison for the MSHSL with the girls and boys high school coaches associations.  Upon retirement, Mr. Peltier continued to work with the sports community in the state of Minnesota, and became Executive Director of the Herb Brooks Foundation.  Retirement didn't slow Skip down, as he additionally worked with the University of St. Thomas as an adjunct lecturer in the Masters of Athletic Administration program serving as a mentor for many new and aspiring athletic administrators, and served as a consultant with many high schools throughout the state.

Brad Shelstad was born and raised in Minneapolis Minnesota, and began his goalie career at age 5 on his families backyard rink with all home-made equipment.  He played four years of high school hockey at Minneapolis, Southwest under head coach Dave Peterson.  Brad played in the State Tournament in 1968, 1969 and 1970, winning a state championship in his senior year of 1970.  He was voted All-City 3 times, and to the All-Metro team in 1970.  Brad also played on the high school golf team.

Following his graduation, Brad attended the University of Minnesota from 1970-1974, earning 4 varsity letters in hockey. The most successful of those seasons was his senior year when the Gophers won the schools first ever National Championship.  Brad was named the Tournament MVP, First-team All WCHA, and was the John Mariucci MVP Award winner. After a brief minor league stint, Brad finished an undergraduate degree from the College of Education.

Coach Shelstad began his coaching career at New Prague high school in 1979 as the Trojans first varsity hockey coach. After 6 seasons he moved to St. Mary's College in Winona as assistant hockey coach.  Following a year as a full-time student at Winona State for special education licensure, he began his "second" high school coaching career.  Again, Brad was the varsity coach of a program in its infancy at Wadena Deer Creek, a position he held for 13 years.  His teams had an overall record of 183 wins, 119 losses and 5 ties, reaching the section finals in 1994 and 2000.  Brad collected coaching awards during this period including Section 8 Coach of the Year in 1993, and Section 4A Coach of the Year in 1994 and 2000.  A number of Brad's players went on to play college hockey.  He also coached boys golf for 13 years, 5 of them as head coach.

Brad remembered "When I accepted the head coaching position at New Prague, I never coached before, except for summer hockey school.  I relied heavily on veteran coaches for guidance.  As a player, I was never aware of the camaraderie among the coaches, and their willingness and desire to help each other, especially the "rookies".  For this, I will always be grateful." Among his fondest memories of 20 years of coaching, Brad lists the players that he had the opportunity to work with.  "It was fun to spend some quality time with high school age players and see them become successful adults." Wolverines Head Coach Scott Woods was among his former players.  "We never made it to St. Paul for the Tourney, but came close a couple of times during my tenure".

Coach Shelstad continued to teach at Wadena-Deer Creek High School, and helped with the youth hockey program.  He additionally kept tab of the varsity squad as a member of the local radio broadcast team.  Brad, at the time of his MHCA Hall of Fame induction began his fourth decade of teaching goaltending at a summer hockey school. 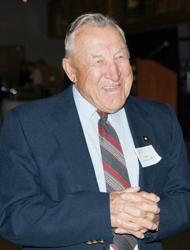 Ken Staples athletic career began at Humboldt high school in St. Paul where he was an all-city player during his sophomore, junior and senior years.  Following high school he was offered a professional contract by the Chicago Blackhawks, but instead chose to sign a baseball contract with the Brooklyn Dodgers.

Following a two year stint in the United States Army, Ken began his coaching career at West St. Paul where he started their hockey program and coached youth hockey with the PeeWees and Bantams.  In 1956 Ken began coaching at St. Thomas College.  In 1957 he won the MIAC championship and had a career record at St. Thomas of 60 wins and 20 losses.  In 1959 he was selected Mr. Tommy and was elected into the St. Thomas Hall of Fame.

From 1959 until 1974 he was the head JV hockey coach at Robbinsdale and Cooper Senior High Schools.  In 1975 he became the head varsity coach at Cooper High.  Coach Staples had a career conference record of 120-66-5, and a career record of 151-78-5. His Cooper teams made it to six regional finals and won the Lake Conference Championship two times. He ended his coaching career at Cooper in 1986.

Among the many players that Ken had the honor of playing for Coach Staples, three made it to the National Hockey League: Jim Johnson, Lance Pitlick and Mark Hentges.  Ken also had several others that played Division I and Division III hockey.