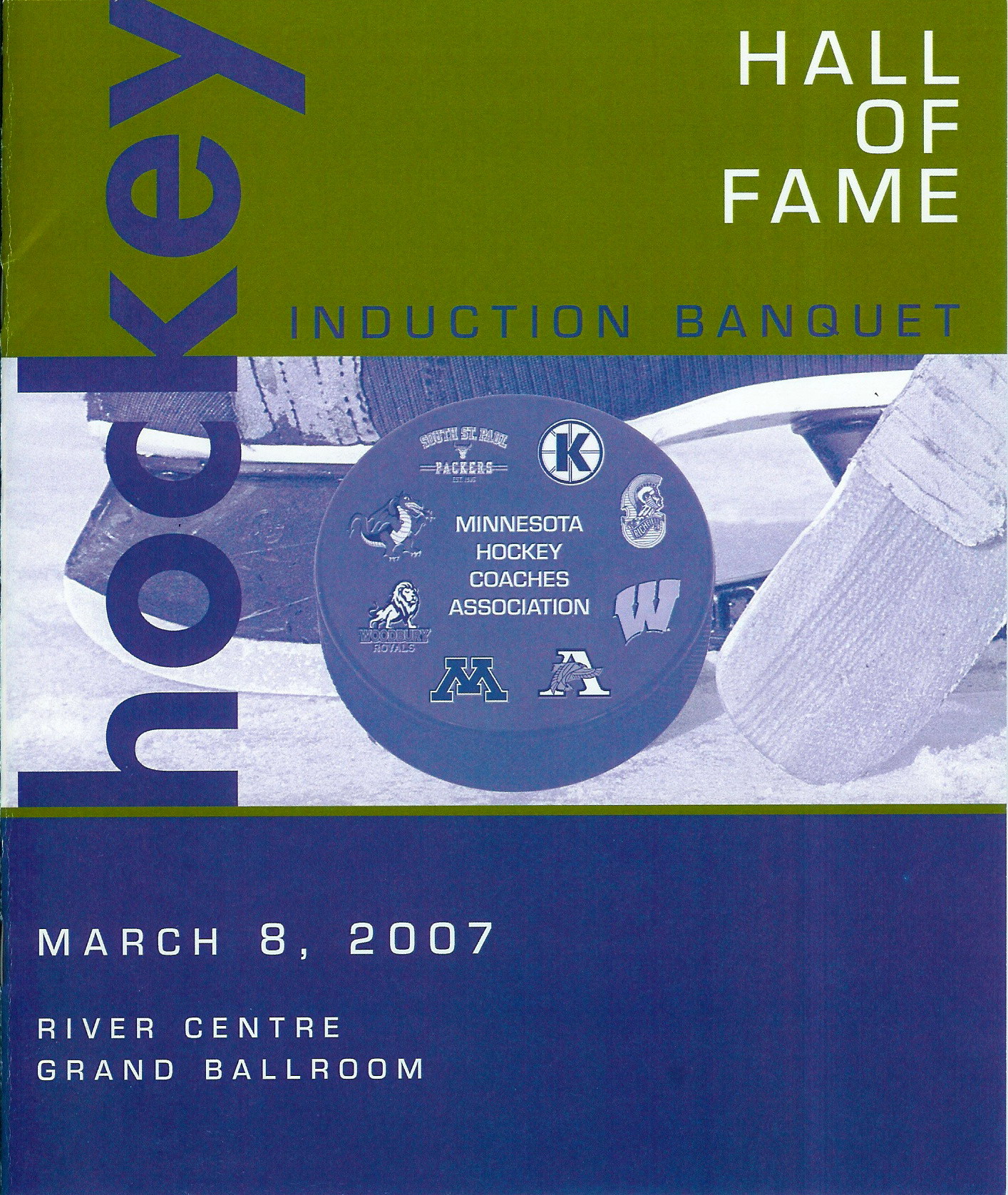 Peter Aus was humbled and blessed to be inducted into the MHCA Hall of Fame, and thanks the Minnesota high school coaches for bestowing him the honor.  Mr. Aus is blessed to ave coached for over 45+ years in junior high, high school and at the college level.  "How good is that - to be able to work with so many terrific young people and to have worked with so many great assistant coaches".  The only year Pete was an assistant coach was in 1994-1995 at Tech, so his assistant coaches over the years were special people and special friends that he made.  "The game of hockey is so special, one I am thankful to have played and coached for a lifetime".

"We came from parents who grew up in Brooklyn N.Y. and had no knowledge of hockey.  All three brothers migrated to the game and loved it!  Whitey had the opportunity to begin the program at Kellogg and me at Litchfield.  Each of us has been privileged to coach in the greatest high school state in the nation and to have coached at the college level for many years. Both Whitey, and I have sons who have followed in the game.  I had the privilege of coaching Dave at Bethel and to share that experience is a highlight".  Aus posted the most wins of any hockey coach in Bethel history with a career record of 120-191-13 and is the first Bethel hockey coach to reach 100 wins in a career.  A two-time MIAC Coach of the Year. During his tenure, Aus developed the program into one of the top in the conference, culminating in 2006-07’s 18-10-1 overall record and 12-3-1 MIAC record, the best finish in Bethel history.  The season also marked a string of firsts for the hockey program as the team earned their first-ever MIAC regular season championship, MIAC playoff championship, NCAA playoff berth and NCAA playoff win.   Aus retired from Bethel after the 2006-2007 season.  He later served as an assistant coach with the Blaine High School boys’ hockey team, assisting his son, Dave.

Whitey Aus grew up in St. Paul and he benefited by the strong hockey programs that the city had developed in the 1940's and 1950's.  The high school consisted of ten teams.  The St. Paul City Conference was among the hockey powers in the state along with the northern teams.

Whitey attended Murray Junior and Senior High School where he played football, hockey and baseball.  He did the same at St. Olaf College for four years, and enjoyed his love affair with sports.  His coaches were very influential in encouraging Whitey's interest in education as a career.  They were great mentors and positive role models during those formative years.  They took coaching seriously but also made it fun.

Whitey graduated from St. Olaf in 1959 with a B.A. degree and in 1964 from the University of Minnesota with a M.A. degree,  He was Captain and voted as MVP of his college hockey team during his senior year.

In addition to coaching hockey, Whitey was an assistant football coach all seventeen years in Roseville, and a varsity assistant in tennis.  He coached eight years in the soccer program and spent eight years as the head mens' tennis coach at St. Olaf.  He assumed leadership of the entire athletics program at St. Olaf between 1989-1995, while continuing as the head hockey coach.  He retired after the 1996-1997 season, a total of 38 years.

Whitey had tried to integrate his Christian faith with his teaching and coaching wherever God has led him.  Being part of the spiritual maturation of young people has been as exciting as watching them progress and as student athletes.

The interaction and cooperation between colleagues has been another highlight of Whiteys' career.  Membership in the old St. Paul Suburban Conference and the old North Suburban Conference, as well as the MIAC, have built friendships, deepened appreciation, and increased respect for and with other coaches.  It is about the kids, but it takes men and women of integrity to be mentors, friends, and role models for our young adults.

Whitey has been honored during his teaching and coaching career with the following:

Bruce Johnson grew up in Robbinsdale, Minnesota.  His early experiences in the game of hockey were on the froze n ponds and outdoor neighborhood rink.  From these early experiences grew a life-long love for the game of hockey.  He played high school hockey for Robbinsdale High Robins, and his collegiate hockey at Augsburg College for legendary Auggies coach Ed Saugsted.

His coaching career began as a high school sophomore and spanned 40+ years, and includes coaching all ages and abilities from mites through college.  Bruce began his high school coaching career at Richfield High School in 1968.  In 1970 Johnson was named as the first head coach of Robbinsdale Armstrong High School and served in that position until his retirement in March of 2002.  During his tenure Armstrong won 401 games, ad two Lake Conference Championships. Johnson has been honored as MHCA Section Coach of the Year award four times, the 2001 John Mariucci Coach of the Year, and the 2005 Dave Peterson Award winner.  Five of Johnsons former Falcons have represented our country as member of the United States Olympic Hockey Team.  Also, a great source of pride to Bruce is the fact that many of his former players are still involved in the game, coaching in the youth, high school and professional ranks.  From 2003-2015 Bruce worked as an assistant coach at Bloomington Jefferson High School, Armstrong High School, Augsburg College and Elk River High School.

Bruce and his wife Lois reside in Plymouth, Minnesota and are parents to three grown children - Leah, Thomas and Aaron. It can truly be said in the Johnson home hockey has been and will continue to be a positive shared family experience. 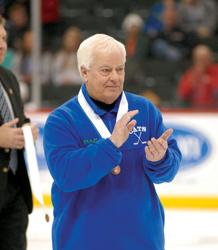 Mike Thomas' coaching career began in 1965 with Bob Boeser at Bloomington Lincoln and lasted until 1971.  After coaching youth hockey in Richfield or 3 seasons, Larry Hendrickson him Thomas in 1975.  From 1977 to 1984, Mike worked with Jake McCoy at Richfield and then became head coach in the fall of 1984 until 1994.  In 1995, Tom Saterdalen and Mike coached together at Bloomington Jefferson.  After one year of not coaching, Mike Taylor of Egan called where they remained together as a tandem for years.

All of the coaches Thomas worked with were influential in one way or another in different ways.  Bob Boeser worked skills and was tremendous with his players.  Larry Hendrickson was fiery and demanded hard play.  Tom Saterdalen ran a great program, handled pressure, and put players in a position to win.  Mike Taylor had youthful enthusiasm, worked hard and got the most out of his players.  Jake McCoy worked tirelessly, taught systems, took kids outside for extra work, and was the most influential in Thomas' coaching career to show confidence in his coaching abilities.

"Finally, I need to thanks some people; Gene Olive and Bob Golloson for hiring me as head coach at Richfield.  All of the head and assistant coaches that I worked with.  To all of the players that I got to know at the four schools.  John Bianchi and Jake McCoy for being good friends and being involved in this honor.  And finally my family - sons Tim and Todd, daughter Kristin and especially my wife Sue who has allowed me to do something that I love".