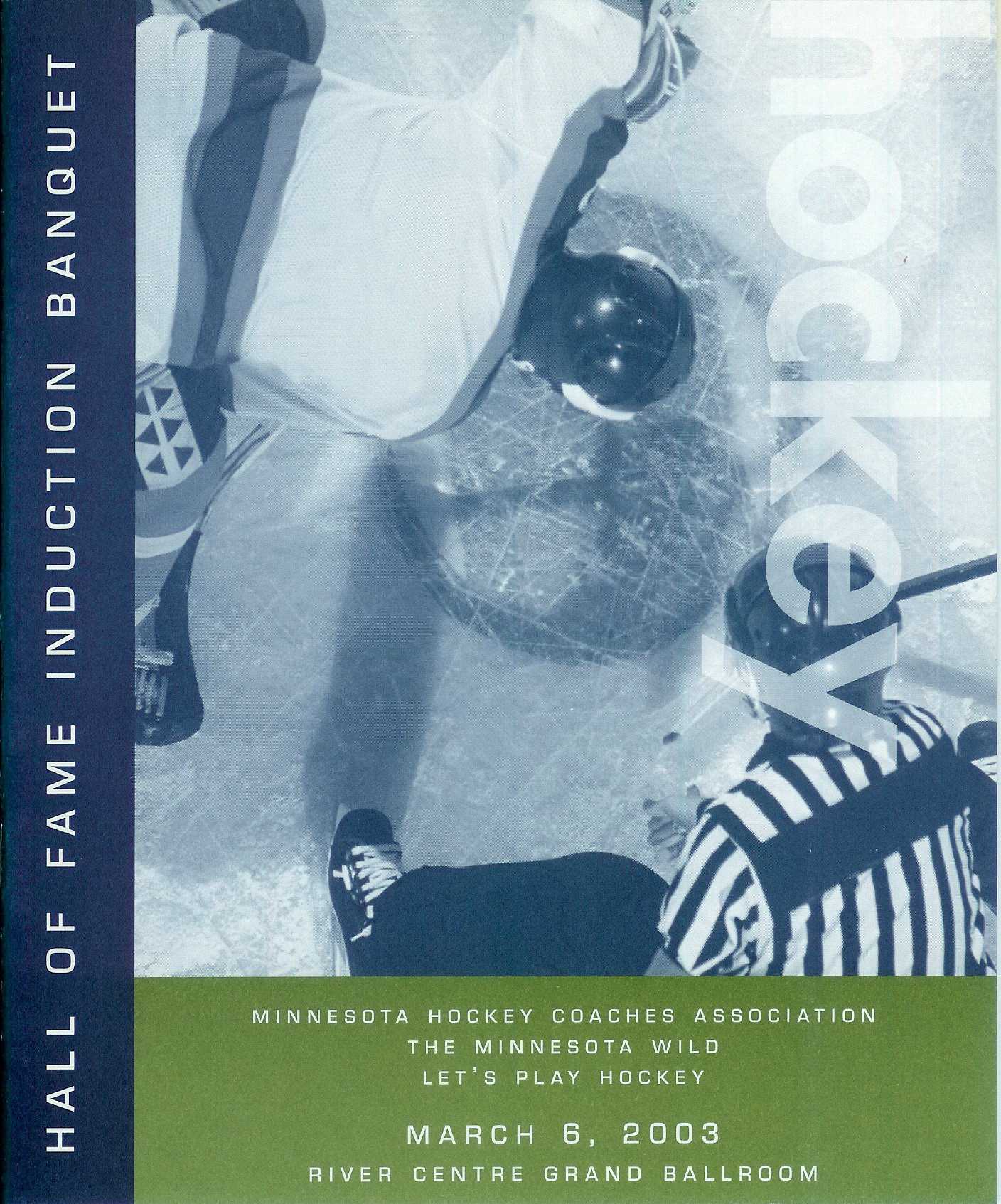 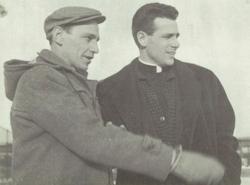 Del Genereau was born in Duluth, Minnesota in 1919 and raised in Rainy River. Ontario. His coaching career in the Duluth area began in the early 50s with the senior team, the Lakeview Cleaners. The team soon evolved into the Geno Paulucci sponsored Chun King Orientals. A noteworthy member of this mid 50s team was a very young man by the name of Tommy Williams of Duluth, MN. After playing on the 1960 USA Olympic Team! Tom went on to pIay for the Boston Bruins. Tom became the first American born player to make it in the National Hockey League.

From 1959 to 1968 Del coached at Duluth Cathedral High School where he amassed a record of 139-38-5. During this period he won 4 consecutive Catholic High School Hockey Championships in 1965, 1966, 1967, and 1968. The teams of this era competed against most of the best teams in Minnesota and practiced on outdoor ice.

After a short retirement, Del was lured to the College of Saint Scholastica in Duluth. Historically an all women’s college, the now administration was on a drive to attract male students. Del was hired as the school’s first athletic director and Men’s Hockey Coach.  In their second season of play, Scholastica joined the I.C.H.A. and did not win a game. The following year they won the N.A.I.A. National Championship. In the years 1972-1976 Genereau compiled a record of 71-28-2. In Del’s final year of coaching, Scholastica finished second in the l.C.H.A. and were the N.A.I.A. Runners-up. During his tenure as Athletic Director, several girls’ sports including basketball, skiing, golf, and tennis became a part of the athletic program. Today Scholastica competes in most men’s end women’s sports, with the exception of football.  After a long struggle with Lou Gehrig's Disease, Del passed away in June of 1988. 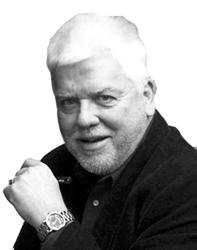 John was born in Duluth, Minnesota, the son of Wally Gilbert, who was known as the greatest athlete in the history of Duluth, if not the entire state of Minnesota. Wally Gilbert played third base for the Brooklyn Dodgers and Cincinnati Reds in the late 1920s end early 1930s, while at the same time starring us the fullback end drop-kicker and punter for the Duluth Eskimos pro football team, as well as on several touring pro basketball teams based in Duluth and Two Harbors. Wally Gilbert was named the third baseman on the all-time Brooklyn Dodgers team when the franchise moved to Los Angeles.

John grew up playing mostly baseball and playing and enjoying all sports, but living in the country outside of town he didn’t have the same opportunity to play youth hockey. When he graduated from Duluth Central and headed off to college at Minnesota-Duluth and later the University of Minnesota, and decided to pursue a career in sports journalism, he noticed that newspaper articles seemed to show the least expertise when it came to hockey, so he tried to study and learn about hockey at every opportunity. He became fascinated with hockey, and began covering the University of Minnesota hockey team, coached at the time by John Mariucci, while in college.

His sports writing career began at the Duluth News Tribune in 1965, covering high school hockey and the UMD hockey program as it moved into Division I status. Two years later Gilbert was hired by the Minneapolis Tribune, where he worked for 30 years, writing a nationally acclaimed automotive column and covering professional motorsports, but was best known for covering hockey. That meant hockey at all levels: John covered the North Stars of the National Hockey League, the Fighting Saints of the World Hockey Association, the United States Olympic team of 1980, as well as the University of Minnesota, other colleges large and small, and high school hockey. Whatever the stakes or national scope of the other levels, he remained steadfast in his love for, and loyalty to, Minnesota high school hockey.

Writing about high school hockey left so many indelible impressions. Tim Sheehy and the International Falls dynasty of the 1960’s, Mike Antonovich and Greenway of Coleraine, the rise of such Twin Cities powers such as Edina ann Minneapolis Southwest, the fabulous game in the Duluth Arena when Phil Hoene scored three goals in 27 seconds to lift Duluth Cathedral to 6-4 victory over Duluth East, in a Wednesday night game with 6,122 fans and a regional live television audience as witnesses, the electrifying play of Henry Boucha and Warroad, and more recently, the brilliant balance of Bloomington Jefferson, and the spectacular three-hat-trick performance of Dave Spehar for Duluth East... just some of the treasured moments that will be added to with the next game, and the next.

John and his wife, Joan, have to sons, Jack and Jeff, and when they were young; John coached their youth baseball arid hockey teams, and later added soccer. His teams always were successful, often winning championships, but he got the most satisfaction from urging maximum individual improvement but always within the context of team success. Hs adopted the philosophy that if you strive to win at all cost then you’ve failed if you don’t win; if you strive to play your best and improve, then you can be successful regardless of the outcome - and more often than not, you’ll win as an exponent.

In 1998, Gilbert was lured away from the Star Tribune to write hockey, sports and automotives for Murphy McGinnis Newspapers, a network of Northern Minnesota-Wisconsin papers based in his hometown, Duluth. In the spring of 2002, that situation changed and he ventured out on his own, to write some hockey books, and to distribute his hockey and automotive expertise on a freelance basis through magazines such as Minneapolis-St. Paul, and other outlets. His hockey and auto articles can; be found on his personal website: jqilbert.duluth.com.

His first book was “Return to Gold Country,” which chronicles the University of Minnesota’s surprising surge to the 2002 NCAA National Championship in hockey. The book contains comments from Coach Don Lucia about his players, comments on each game by the players, and the building passion through the stretch drive. Along with numerous interviews, there are 70 photos taken by John of Gopher games too, and a brief historical look at the program, all reflecting John’s emotional attachment to homegrown state high school players, and the institution of Minnesota high school hockey.

His theory is that anyone can criticize a lot of things that might be perceived as wrong with high school hockey, but lets not lose sight of everything that’s right about it. 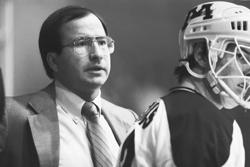 The former University of Minnesota men’s head hockey coach guided the Golden Gophers to an average of nearly 28 wins per season and seven league championships during his 14-year tenure (1985-1999). During this time, the Gophers made 12 NCAA appearances in 14 seasons, six NCAA Final Four appearances, and Woog became Minnesota’s all-time winningest coach with a 389-187-40 record (.664).

Woog is 1962 graduate of South St. Paul High School, where he garnered all-state hockey honors for three consecutive years and played in four Minnesota State High School Hockey Tournaments. He attended the University of Minnesota and played under the legendary coach, John Mariucci. Woog led the Gophers in scoring and earned All-American honors his junior year (1965). He captained the Gophers his senior season and was named team Most Valuable Player. Woog played for the 1967 U.S. National Team at the International Ice Hockey Federation Men’s World Championships in Vienna, Austria. In 1971, Woog joined the coaching ranks and directed the St. Paul Vulcans to two Junior National titles. Woog retuned to South St. Paul High School in 1977 as head coach of the boys’ hockey team. In six years, his Packer teams won two conference titles and advanced to the state tournament four times.

Woog served in various coaching positions on U.S. National Teams from 1978-1989 and served as assistant conch for the 1984 Olympic Team that competed in Sarajevo,Yugoslavia. He was a national committee member for the AHAUS and Chairman of the National Skating Committee for USA Hockey. In 2000, Woog was inducted into the University of Minnesota’s Athletic Hall of Fame and in 2002 he was inducted into the United States Hockey Hall of Fame. Woog resides in South St.Paul, with his wife Jan. They have three children, Amy, and Dan.