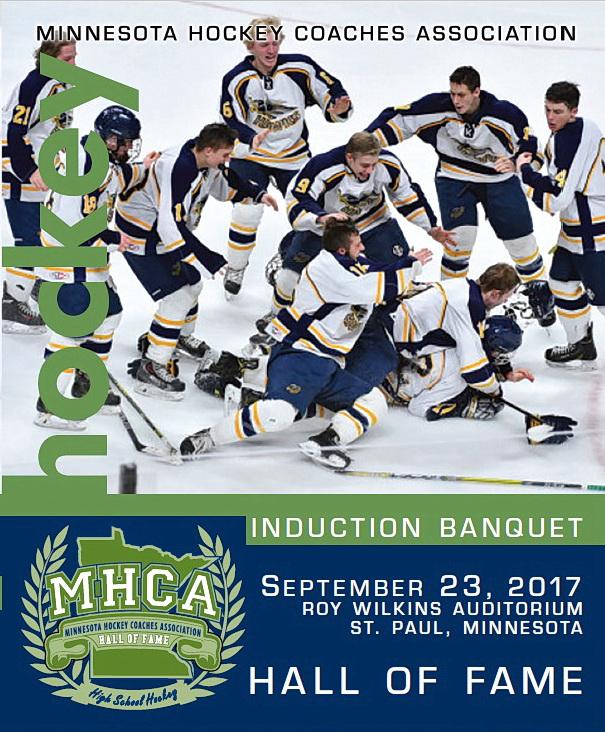 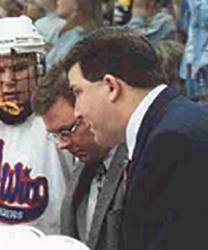 George Nemanich has been involved in the Minnesota hockey community for 29 years, first for one season each at St. Agnes and Totino-Grace , then subsequently in Red Wing.  He was always surrounded by quality coaches and even better people in the hockey world and without a doubt his biggest mentor was Jim Pohl.   For three years he assisted the “Godfather of Red Wing Hockey” learning more about the game and the culture of a quality program.  From there, he became the head coach of the Red Wing Wingers, where he was assisted by numerous talented and dedicated coaches.  As the head coach of the Red Wing Wingers, George accumulated a record of 331-142-15 and led the Wingers to 3 conference championships and 6 state tournament appearances, winning the Class A State Championship in 1997.  His teams also competed in a section title game 13 out of the 18 seasons he was the head coach.  George has been honored as a Section Coach of the year five times and been named the John Mariucci Coach of the Year in 1997 and 2002. Under his leadership the Wingers also captured five academic section titles as well.  He worked tirelessly to promote and develop youth hockey in Red Wing by running camps and clinics for both players and coaches.  Emphasizing a “do it with class” mentality throughout his program, George’s teams have been noted for their good sportsmanship and respect for the game. He retired from his high school coaching position in April 2010, and continued to coach hockey at the Bantam A and Pee Wee A levels in Red Wing from 2010-2016.  During his tenure at Red Wing, George served for 9 years on the Minnesota Hockey Coaches Association Board.

He was in a leadership capacity while a number of significant changes to the high school game took place such as the Mighty Duck rink building initiative, the MSHSL summer waiver, the increase in the number of games and minutes per period to the high school schedule and the establishment of the Upper Midwest Elite League.  George is grateful for the experiences he had, but more importantly the relationships with his colleagues that he gained from his time on the MHCA executive board.

George resides with his family in Red Wing. He and his wife Mary are very proud of their three children (Amy, George, and Tom) who learned at a young age the value of “teamwork” and “dedication” by watching the Winger hockey team in action.  Since 2010, George has worked as a school administrator for the Rochester Public Schools.  First, as an Assistant Principal at Mayo High School for three years (2010-2013) and then he became Principal of Ben Franklin Elementary and Montessori at Franklin in 2013. 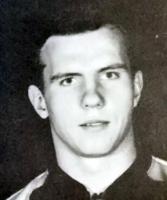 Wayne Orn grew up in Mound, MN, graduating in 1963. During his years at Mound High School, he lettered in football, hockey, and baseball. Starting his hockey career at age 12, he found himself playing for a newer high school hockey program his sophomore year and serving as co-captain his senior year. His coaches were Dave Rogers and Dick Halverson. Orn then attended Concordia College in Moorhead, lettering in football and hockey, graduating in 1967. He was a player-coach in 1965-66 on the hockey team, along with Bob Nielson, and captain in 1966-67 under new coach Charlie Basch. His first teaching and coaching position was at Devils Lake Central High School in North Dakota. Besides the high school team, Orn's responsibilities included coaching the squirt, pee wee, and bantam teams during the weeknights, in addition to serving as player-coach for the local town team on Sundays. From 1968 to 1970 Orn became the Detroit Lakes High School hockey coach and assistant football coach. He was hired in 1970 to start Austin's first high school hockey program. Two years later he was one of five individuals who started fundraising for the 2,500 seat Riverside Arena opening in 1973. Orn's final high school coaching stop was at Stillwater High School in the St. Paul Suburban Conference. 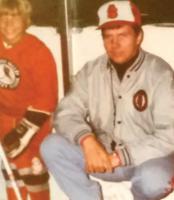 After two years under .500, the Ponies went 59-25-4 including a then school record of 20-3 during the 1979-80 campaign.  After a couple of summers' experience with the hockey school in Austin, he formed the St. Croix Valley Hockey School at Lily Lake Arena in Stillwater in 1976. The program offered spring, summer, and fall clinics and leagues for 23 years with help from Marty Rossini, Al Peterson, and other area coaches. After losing his first wife, Nancy, to cancer in 2000, Wayne retired from teaching in 2002 and moved to Alexandria, Minnesota, on Lake Darling with his wife, Cindy. His sons; Mike, Rob, and Brad - all played high school and college hockey and all stayed active with their community hockey programs. 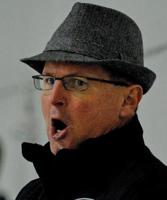 Dave Swanberg grew up in East Grand Forks, MN as a three-sport athlete (football, hockey and track) and was a 1980 graduate of East Grand Forks Senior High. He was a member of the 1979-80 team that played in the State High School Hockey Tournament under Tony Palmiscino. After high school, he attended Concordia College in Moorhead playing a year of football and hockey for the Cobbers. He took a year away and played junior hockey for the Austin (MN) Mavericks. Returning to Concordia College in 1982, he played three more years of hockey and ran track where he earned All-American honors in the 400M. In 1985 after graduating with a degree in Physical Education and Health, Swanberg began his hockey coaching career as an assistant to his former high school coach, Tony Palmiscino at East Grand Forks Senior High. 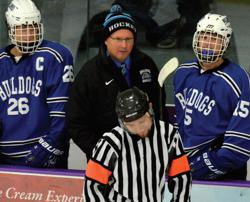 In 1986, he moved to southern Minnesota as the head coach for the Le Sueur Giants. Le Sueur combined programs with St. Peter in 1988 to become the LSH-SP Bulldogs where Swanberg remained the head coach until 1999. He stepped in and out of various coaching positions in the youth and high school programs until retiring from coaching in 2016. Highlights of his hockey coaching career include having his daughter Amanda as a student manager, coaching daughter Samantha in the girl’s program and coaching son Jack from youth through the high school program. In a small-town school district of 1,200 students Swanberg has worn many coaching hats over the years including varsity baseball coach, assistant baseball coach, assistant golf coach, girls track coach, assistant girls hockey coach, and a long-time assistant football coach from 1986-2011 and 2014-15. As a high school hockey coach for the Bulldogs, he amassed a record of 225-165-17 as a head coach, 50-31-1 as an assistant coach, and a combined record of 275-196-18. Swanberg was named Section 1 Class 1A Coach of the Year in 1999, and Section 1 Class A Assistant Coach of the Year and Class A Assistant Coach of the Year in 2016. In 1986, when Dave considered the move to Le Sueur, he assumed he would return ‘up north’ after a gaining a few years of experience. 31 years later, Swanberg is still living in LeSueur with his wife of 30+ years, Deb. Together they have three children, Amanda, Samantha and Jack. They also have three grandchildren, Jayden, Kali and Charlie. Dave is the Activities Director and Assistant Principal at Le Sueur-Henderson High School, and served as the Vice President for the Minnesota State High School League Board of Directors. 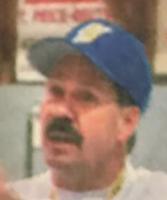 Russ Welch graduated from Hastings High School in 1974, where he played football, hockey, and baseball. While playing H.S. hockey for Hall of Fame coach Don Saatzer, Russ earned all conference honors his junior and senior years. He also received the same honors in baseball his senior year. Russ spent the next two years playing junior A hockey for the St. Paul Vulcans, coached by Hall of Fame coaches Doug Woog and Whitey Willer. During Russ’s second season he was selected Junior A All-American with 50 goals, 50 assists, and 103 penalty minutes, earning him a scholarship to Michigan State University. At Michigan State Russ played for Hall of Fame Coaches Amo Bessone and Ron Mason. During his four years at MSU, Russ accumulated 190 points, earning 3 year leading scorer, top freshmen, Amo Bessone award, MVP, and Captain his senior year. Following his college career, Russ returned to Minnesota and accepted a teaching position at South St. Paul High School. For 3 years he served as an assistant coach under Doug Woog (great experience), which lead to him becoming head coach for 10 years. As head coach Russ was appreciative of Whitey Willer, Paul Moen, and Gary McAlpine who all helped him grow as a coach. In 1994 Russ returned to his hometown of Hastings, where he served as head hockey coach for 21 years. At Hastings, Russ got the opportunity to coach with past teammates, friends, and players. These guys (Jerry Meier, Rory Johnosn, Mike Klimek, Jeff Niederkorn, Justin Masloski, Dustin Vogelgesang, Dan LaCroix, Kurt Welch, and Adam Welch) all helped him, and the Hastings program succeed over the years. He is very grateful for all that they did. 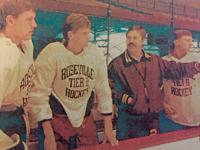 Through his 35 year teaching career Russ was very grateful to have coached many great kids in a variety of sports. He coached football (35 years), hockey (34 years – 3 as assistant),baseball (26 years), tennis (1 year), softball (1 year), and Doug Woog Hockey Camps (33 years), and as a bonus he got to coach all three of his children Danny, Katie, and Joey. Also during this time Russ served many years on the MHCA board as Section Representative, Vice President, President, and Past President. He also served many years for USA Hockey as a clinician, and coach of select 15’s, 16’s, and 17’s. As head hockey coach at South St. Paul and Hastings his teams won 464 games, 8 conferences titles, 9 state tournament appearances, 8 section coach of the year awards, and the 1993-1994 state coach of the year