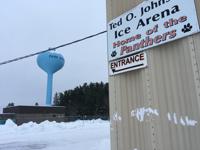 The Ted O. Johnson Arena (Formerly Park Rapids Community Center) is located at 200 Huntsinger Ave. in Park Rapids, MN and is a x1 sheet facility that opened in 1980 for the Park Rapids Youth Hockey Association Panthers.  The Arena was renamed after Mr. Theodore Oliver 'Ted' Johnson who is considered the Father of Panther Hockey in Park Rapids.  It was Teds' passion for people, the underdog, and hated seeing anyone being left behind.  He also felt that anyone living in Minnesota should know how to swim, ski and skate, and when he realized that the area youngsters didn't have hockey, he set out to establish the Hockey program by local grass-roots efforts.  Once the arena was built in 1980, Ted continued his involvement and devoted countless hours to area skaters, and was an arena fixture often seeing helping children out with equipment, teaching little ones how to skate, and videotaped many varsity hockey games until his death on July 26, 2004.

The Ted O. Johnson arena appears to be the same style of building khacki exterior metal, and has the same inward and feeling as several northern Minnesota arenas namely; current Hallock arena, and Fryberger Arena in Duluth.