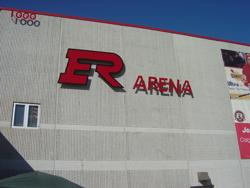 The Elk River Arena located next to the High School at 1000 School Street, Elk River Minnesota houses 2 sheets of ice within the arena for the various Elk River boys and girls youth hockey programs.  It is also the home of the Elk River Elks High School hockey team that has a rich hockey tradition, and history of producing some of the best high school hockey players, and recent NHL talent the state has seen within the State-of-Hockey.  On the buildings exterior it displays 3 large banners of Joel Otto, Dan Hinote, and Paul Martin whom all wore the ER jerseys proudly.  The 2001(AA) banner from the State Championship hangs proudly in the Elk Barn, which aptly is the name given for the 1972 built 'old arena'.  The old arena housed a standard 195 x 85 ice sheet with seating for 400 spectators.  The history of the original barn dates back to fall of 1971 when the groundbreaking event took place before the arena was completed before the 1971-1972 season with only natural ice.  The dedication ceremony for the barn was held on January 11, 1972, and in Fall of 1976, ERYHA purchased the building.  The following season of 1977-78, an artificial ice plant was installed into the building, and re-dedicated December 2, 1977.

In 1997, with lots of community support, the Elk River Arena expanded to 2 sheets of ice for the growing hockey programs in the city, and surrounding communities.  This new arena features an olympic sized sheet of ice at 200 x 100 with seating for 1,200 people to cheer on the Elks during a cold Minnesota winter evening.  Since 1997 the Elk River High School team has played all of it's games in this new Olympic sized arena.  In addition to public open skating, the new rink also offers other leisure opportunities, such as a lunch hour stroll in the upper concourse that wraps around the entire rink.  On Sunday June 2, 2019 the City of Elk River held a farewell to the barn celebration with limited edition t-shirts sold to people coming to pay respects to the old arena that started Elks hockey.  The city began demolition of the barn Monday August 12, 2019.  Although the day was bittersweet for as the barn meant many things to many people for decades, but the end of the barn represented new beginnings.  Almost one month, the new groundbreaking ceremony with community and civic leaders on hand held July 10, 2019.  Elk River will see a new state of the art multipurpose facility is being placed in the same exact location of the history laden 1972 arena that will feature year-round ice, field turf activities and dry floor events.  The new facility will also include a dedicated space for senior citizens, community meeting and banquet rooms ad a cafe/retail area.  The new building was one of the many recreational and outdoor amenity improvements made possible by the voters of the city.