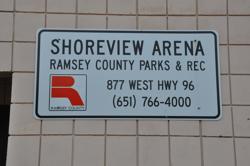 Shoreview Arena is located at 877 West Highway 96 in Shoreview, MN. Shoreview Arena is one of the numerous 1970's erected arenas built in 1974 within the many Ramsey County "white and red" arenas. Outwardly, Shoreview Arena appears to be the same exact structure as St. Pauls Biff Adams Arena. With seating for 200 spectators it is the home ice arena for the historic Moundsview Mustangs Youth Hockey Association, and the Irondale Knights Youth Hockey Association. Outwardly, the building shares the same design as Oscar Johnson Arena.