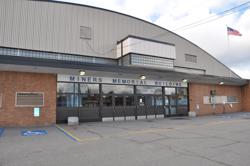 The Miners Memorial Recreation Building is located in Virginia Minnesota on 9th Ave. South 55792.  The barrel shaped building was built by the city of Virginia Minnesota in 1957 for the Virginia Blue Devils high school hockey team - that it still plays in today.  The Miners was the 2nd indoor arena in Virginia behind that of old 1923 built Virginia Recreation building that housed hockey and curling.  The Arena itself is named after Virginia native Randolph Bruno Bree Cuppoletti (born June 19, 1910 - September 22, 1960) whom ironically wasn't a professional hockey player, but rather a professional football player that played guard for six seasons with the Chicago Cardinals and the Philadelphia Eagles.  The Miners Memorial Building/Bree Cupoletti Arena has 2 sheets of ice, and is a multi-use facility known for hosting a wide array of events, and various recreational shows in the summer months.  The lobby area of the building features some nice native Virginia hockey photos of players that went on to play Collegiate, professional and Olympic hockey.  Additionally a nice Carlson Brothers mural display adorns a wall within the lobby - dedicated in memory to their father Jack Carlson - whom additionally all call Virginia home, and once donned a Blue Devils uniform.

The arena is centrally located in Virginia and less than five minutes from the historic downtown district.