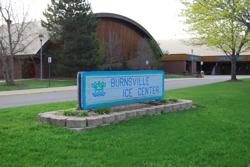 The Burnsville Ice Center located at 251 Civic Center Pkwy. in Burnsville Minnesota opened in 1972 initially with one rink with seating for over 1400 spectators.  In 1985 -the same year that Burnsville captured their first Boy's State High School Hockey Championship as the formerly called "Burnsville Braves" with another to follow in 1986- the Ice Center grew to 2 ice sheets with the addition of rink 2.  This rink features seating for 350 Blaze fans for a chilly Minnesota winter night.  The 2 rinks are very similar in design, with domed roofs, wood ceilings and beams, and each features standard ice sheets measuring at 200ft. x 85ft. Rink 1 -with it's higher seating capacity and four sided scoreboard hanging over center ice as the centerpiece- is the main rink used today for the various Burnsville boys and girls youth hockey programs.  It is also the home of the Burnsville Blaze High School hockey teams (Previously called Burnsville Brave) that have a rich hockey tradition within the "State-of-Hockey" with many more tourney trips to St. Paul to follow in seasons to come!