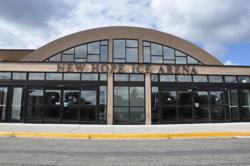 The story of how New Hope Ice Arena became to be started back in 1969 when Northfield and Southern Railways donated 9 1/2 acres to the Village of New Hope.  Attached to the donation was a stipulation that the land be used for recreational purposes only.  A few years later, New Hope residents Nils 'Sonny' Sundquist and Jerry Sundgren gained the support of then Mayor Erickson, and Park & Recreation Director Ron Lehman to pursue the idea of building a minicipal ice arena.  The New Hope Ice Arena is a classic venue that is located at 4949 Louisiana Avenue North, New Hope, MN 55428 & has two ice rinks.  Both rinks have standard dimensions of 200 feet x 85 feet.  The north rink, erected in 1975, has a vintage wooden barrel roof ceiling and has stadium seating for a capacity of 2,200 spectators, and has the EXACT floor plan and seating arrangement, roofline as the 1974 built Cottage Grove Ice Arena, and that of 1976 built Alexandria Runestone Arena.  The Arena opened officially on November 2, 1975 to the now defunct Hennepin Nordiques vs. Weber that was part of the Midwest Junior Hockey League (MWJHL) - which today is the United States Hockey League (USHL) both of which are Tier 1 Elite Junior Leagues.  The arena has undergone several changes and additions over the years, including adding a second sheet of ice.  The first such addition to the rink occurred three years after the opening in 1978 with the addition of the third floor.  This space was added to accomodate meeting and banquet rooms and an extra kitchen, stairways and an elevator was added.  A U.S. department of housing and urban development grant was secured in the amount of $87,000 to help pay for the addition which entirely covered the costs.  Today, this third floor is still utilized for meetings and banquets, but mostly used for local dance classes. 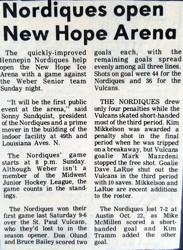 The second major addition to the arena was the addition of the south rink - adjacently added in April 1996 with the ribbon cutting ceremony in December of 1996 - and has seating for 1,000.  In 1995, the legislature established the Mighty Ducks grants to help communities build new ice rinks or renovate rinks already in use.  Between 1995 and 2004, over $18 million was awarded, helping to create 61 new sheets of ice statewide.  Senator Ann H. Rest (DFL-New Hope) introduced the bill to revive the “Mighty Ducks” grants program.  The city of New Hope won a $250,000 grant in 1996 for the construction of the second ice sheet at the New Hope Ice Arena. “Community ice arenas are valuable parts of our regional infrastructure,” said Sen. Rest.  “Many facilities are in need of renovation to enable them to continue to serve the needs of young athletes.” Senator Rest’s legislation allowed communities across Minnesota, including New Hope, to apply for grants for new installations ($400,000 each) or for renovation of existing facilities ($200,000 each) and is for a total of $6 million.  The grants were awarded through the Minnesota Amateur Sports Commission, which supported the program.  Rep. Sandra Peterson (DFL-New Hope) was the author of the companion bill in the House of Representatives.

New Hope rink #1 is a classic venue, and is one of the few remaining indoor facilities that have a wooden barrel roof with the exposed wood within the interior.  This was one of the main reasons why Disney Films were drawn to the building for The Mighty Ducks motion picture, filmed mostly within the arena in 1991.  The now infamous "Flying V" scene shows the now painted over NH round logos that once adorned the walls on the rinks scoreboard end.  Another movie scene showing Gordon Bombays' playing days within the rink said Minnehaha Arena under the scoreboard, but it was actually shot within New Hope.

After bearing the bodychecks and slapshots of countless hockey games, New Hope's 34-year-old ice arena needed some serious renovation work in 2012.  Spearheaded by long-time rink Manager Jim Corbett, and a few year battle with a disagreeing Mayor over financial losses the arena had incurred, the old arena underwent several changes to the entrance, a new metal enterior roof covering, and more importantly - the ice plant and underground refrigeration system.  Snow and ice had also damaged the roof considerably over the years.  Replacing the damaged single-ply EPDM roof with a watertight, energy-efficient solution was a critical step in the renovation process.  Without a properly performing roof, any upgrades to the building's refrigeration system would not be effective.  Additionally, the leaky roof increased the risk of damage to a newly installed ice rink. 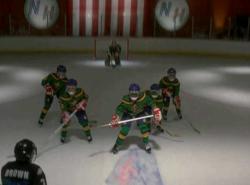 The city sought bids to find out how much work it would take and what it would cost to replace the north ice sheet.  The sheet was opened in 1975 and its useful life was spent, said Jim Corbett, retired recreation facilities manager.  He checked with other cities that replaced rinks of similar age and size, and said the costs varied from about $900,000 in Alexandria to about $1.5 million in Bloomington.  More than 100,000 people a year visit New Hope's arena, which is home to one Armstrong and two Cooper high school hockey teams.  The city sent bid requests to 36 firms for an engineering study; it wanted to determine the costs of replacing the north ice sheet, remodeling the community room, upgrading locker rooms and the indoor walking track, and making other improvements.  "It needs repair, we know that." Mayor Kathi Hemken said, the city applied for a grant from Xcel Energy to help pay for the engineering study and seeked grants for the renovation. The city of New Hope also applied for a $711,500 local government capital improvement grant that legislators will review in the upcoming session, said Shari French, parks and recreation director.  The arena lost $110,584 in 2008, but $102,000 of that was for non-cash depreciation, said Steve McDonald, an accountant hired by the city, which is without a finance director.  He said the arena's operations fund dropped by $6,100 to $124,992. To offset the loss, the City Council increased ice time rates in September to $191 for prime time, French said.  She said the council is expected to give final approval in December to a $60 increase for arena community room use to $300 per event for resident groups of 50 or more. The council also retained Carlson Sports Marketing to sell advertisements posted on Zambonis and inside the two rinks.  Advertising revenue will be split with the city, French said.  Corbett said many cities built ice rinks in the 1970s that now need floor and refrigeration work.  Coon Rapids is considering whether to replace its Cook Arena, built in 1973, with a rink in a proposed community center.  Edina approved the sale of $2.4 million in bonds for major upgrades next year to two rinks in Braemar Arena, opened in 1965.

Renovation to the north ice rink in the facility include energy-efficient equipment, funded by a Hennepin County Youth Sports Grant, improvements to the community room and lobby and a new roof over that portion of the building.  Hennepin County issued a $275,000 grant for the energy-efficient components of the project this year. The north ice rink “was reaching the point of its life span so the city had been in discussion for a few years about how we would move forward with that replacement,” said New Hope Director of Parks and Recreation Susan Rader. Now the ice on the north rink is replaced with a new more efficient refrigeration system and a new dehumidification system is installed, said Rader.  The south ice rink remained open to the community during construction.  McKinstry, the contractors on the project, estimate the energy savings for the city will be approximately $57,000 a year, Rader said.  The city funded the new roof through more than $3 million in energy conservation bonds and partially from its own budget, she said.  “It will be a good sheet of ice for all ages to skate on,” Rader said.  “It’s been a long process, but I think overall everyone will be pleased with the final results,” she said. Hennepin County’s Youth Sports Program funded 11 projects with $2.2 million in capital grants and 16 equipment grant projects of $105,452 in 2012. “The (youth sports) grant was much needed and much appreciated.  We have a lot of people that go through that facility every year and a lot of use…so having those Hennepin County dollars was greatly appreciated,” Rader said. The grand re-opening of the North rink was held on Wednesday, Aug. 22, 2012.  Former Armstrong Falcons, University of Minnesota Gopher and NHL'er - Jordan Leopold was present for the ribbon cutting ceremony.