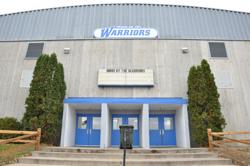 Brainerd Civic and Gold Medal Arenas are located at 503 Jackson Sreet in Brainerd, MN.  Erected in 1977 with one sheet of ice, the Brainerd Civic Arena is home to the Brainerd Amateur Hockey Association (BAHA) & the history rich boys and girls Warriors high school hockey teams.  Outwardly, Brainerd Civic shares an exact design and look as the 1976 opened Schmitz-Maki Arena in Farmington, MN (prior to Essentia Health Addition).  The idea to erect an indoor arena came started in 1973 between two ambitious gentleman named Bob Olson and Art Donlinger whom were playing cards at the local Brainerd Lions Club. Olson, whom had recently moved into the Brainerd community 2 years prior in 1971, "wanted to get the funding to build an arena, as my 4 boys all played hockey in Owatonna and then in Brainerd after we moved there" said Bob Olson.  Art, a local business man said to Bob "If you are so ambitiuous to get this done, and spearhead the efforts, I will donate the first $50,000 to get it going". And so it began, over cards at the Lions.  Bob a local business owner himself at Hardware Hank in Brainerd partnered with Dr. Jack Echternacht - a local dentist - in 1971 and formed the Brainerd Arena Civic Center Inc. - which was a non cooperative funding drive that any donations made to arena efforts were tax deductable. The funding efforts started in 1973 by Art Donlingers "nest egg", per Bob Olson - which generated over $1 Million dollars between 1973-1975.  Enough monies were collected for construction to begin in the fall of 1976, and was completed in time for the beginning of the Warrior boys hockey season by the fall of 1977.  The first season of operation Brainerd Civic Arena had natural ice within the rink.  In 1978 the $350,000 ice plant was purchased and installed along with concrete flooring.  Other notable additions to the 37+ year old building came in 1981-1982 when the upstairs heated glass mezzanine and concession area were added. The most notable addition to Brainerd Civic Arena came in 1999 with the addition of Gold Medal Arena (GMA) to meet the demands of the growing Brainerd Amateur Hockey Association.  Gold Medal Arena was aptly named so for it's unique history rich dashers that were purchased from Lake Placid N.Y. - home of the Miracle on Ice hockey game & site of the 1980 Olympics where the USA hockey team captured the Gold Medal.  The boards were purchased and shipped to Brainerd in 1998 before the arena opened, but as history reveals, the boards turned out to be a bad purchase as they were in "farely rough shape to begin with", and sadly only lasted one year within Gold Medal Arena before the historic dashers were replaced in 2001 by the city of Brainerd - whom at the time operated the Arenas.  Not a single tax dollar was EVER used to erect either arena.  It was a community involvement from the start from the unselfish generosity in the funds donated, materials used, and the dedicated  labor made it possible for the valuable community facility in which it stands today.  The adjacently connected rinks have over 39,000 square feet of available space.  Both arenas are used for ice November-March; June-August.  The Civic Center Arena has over 22,000 square feet, where as the Gold Medal Arena has over 17,000 square feet.  The Brainerd Hockey Foundation recently took over operation again of both rinks on October 25, 2013 for the selling price of a $1.00.  The city of Brainerd was losing money in the tune of $80-100,000 a year from operating expenses causing BAHA to also previously take over operations on October 1, 2009 after the City Council wanted both arenas shut down.

The entire Brainerd Hockey Community owe Mr. Bob Olson, Dr. Echternacht and Art Donlinger a debt of gratitude for their collective vision to make the building a reality. Mr. Bob Olson served as volunteer General Manager of the Brainerd Youth Hockey Association for over 18 years, and operated Hardware Hank from 1971-1990 where countless youth purchased sticks, tape and hockey gear in Brainerd.  Ironically, Bob's son Eric Olson, years later removed from Brainerd living in Waunakee Wisconsin spearheaded local efforts to erect the Waunakee DeForest Ice Rink, just as his father before him did.

Special thanks to Dan Anderson at Brainerds own Hockey House shop, Brainerd Rink Manager/Coach Jim Archibald, and Bob Olson for taking the time to answer questions for us on the origins of BAHA and the history rich Brainerd Civic Arena.