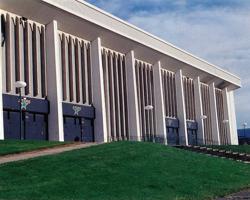 The Metropolitan Sports Center was an indoor arena that formerly stood in Bloomington, Minnesota, a suburb of Minneapolis, Minnesota.  The arena was constructed in little over a year at the cost of $6 Million dollars- which was completed in 1967 in time for the North Stars first home game held on October, 21st 1967 against the now defunct California Golden Seals.  Bill Goldsworthy scored the Stars first goal coming in the second period against Seal goaltender Charlie Hodge.  Met Center was designed by Frank Pattee Architects Inc., and lead architect Thomas Stahl of Bloomington, MN that used the 1965 built Braemar Arena in Edina, MN as a concept building for the 1966 built Met Center, and also designed the 1969 built Roseville Ice Arena.   The Met Center seated 14,400 for hockey to more than 17,000 for events which utilized the rink-floor for seating.  Many fans remember the arenas unique assorted kelly-gold-white-black random colored seating, that was merely an accident.  The foreman that was in charge of placing the seats were to be done in single colored 'sections', but were installed randomly and they didn't have time to correct the error.  The Met was designed for many types of attractions and events including hockey as the main attraction, basketball, circuses, rodeos, trade shows, conventions, and concerts to name a few.  The arena's main tennants were the Minnesota North Stars of the NHL from 1967-1993 and ABA's Minnesota Muskies. The Muskies played just one season, before moving to Miami.  They were replaced by the Minnesota Pipers, who also played only one season.  The MISL Minnesota Strikers played indoor soccer at the Met Center from 1984-1988.  The Boys' High School Hockey Tournament was also held there from 1969-1975. For its first 15 years, it was known as the Metropolitan Sports Center until 1982 when the shorter name of Met Center was adopted.  The Center's south side was 880 feet north of the third base line of the Metropolitan Stadium-former home of the Minnesota Twins. The Center was 308 feet wide- from north to south, and 424 feet long- from east to west.  Outside height of the center was 48 feet at sidewalk level (10 feet above the parking lot surface) to 64 feet at the peak of the roof.  Inside the height was 59 feet from the middle of the rink-floor to the ceiling.  The ice surface measured at 200 x 85 feet.  The building itself was a fireproof, steel framed building covered with pre-cast concrete panels, separated by pre-cast concrete columns.  Twelve canopy-covered entrances, each with metal framed doors and glass inserts, admitted spectators to all four sides of the Center.  Parking was available on three sides: east, west and south.  A 16-foot sidewalk surrounded the entire center.  The arena had three interior areas: floor level (actually below ground-location of the player locker-rooms), concourse level (main entrance level), and the upper level.  Entrances to all seating areas were from the main concourse or main entrance level.  All the seats in the met center were the same - upholstered in striking kelly, gold, white, and black naugahyde fabric with arm rests.  The chairs themselves became quite a story in and of themselves, as the Met Center was supposed to have colored sections, but in 1967, before the first game, the crew installing them began placing the multi-colored chairs randomly before team executives noticed - and the chairs were still being installed when fans arrived for the 1st home game.  Later, during the Stars 'Working Harder Than Ever' Norm Green campaign, with a remake of Met Center and arena renovations made, the iconic colored chairs were re-upholstered with dark red/burgundy colored fabric.   The concessions at the met were at one time among the finest in the country with such delicacies as German bratwurst, Mexican tacos, Italian pizza, Kentucky fried chicken, rare roast beef and usual staples of hot dogs, hamburgers, pop, beer, candy bars, peanuts and popcorn. 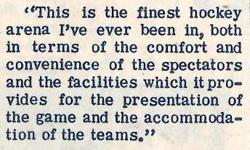 The Met was considered to be one of the finest arenas in the NHL for many years, both for its sight lines, and its ice surface.  Among NHL players, the Met was known for fast ice, the best lighting, great locker rooms and training facilities. Despite its wide array of concessions, the Met never boasted fancy amenities, and by comparison to modern arenas it had cramped concourses, no luxury suites, and very few frills.  On October 25, 1978, Met Center made NHL history, that changed ice arena advertising forever in the sport of hockey when Minnesota 3M company unveiled board advertising at a North Stars vs. Boston Bruins hockey game.

Following the North Stars departure to Dallas becoming the Dallas Stars the Met Center was sadly demolished on December 13, 1994 after Norm Green moved the North Stars.  Three attempts were made to undertake a controlled implosion of the building, but none was sufficient to bring it down.  As a result, the arena had to be demolished using the usual wrecking ball.  "This is was a sad day for Minnesota Hockey fans"- former North Star defenseman Tom Reid said while fighting back tears on Channel 5 live news following the demolition.

For several years after the arena was demolished, the property served as an overflow lot for the adjacent Mall of America which is built over the old Met Stadium.  In 2004, an IKEA store opened on the west end of the property but does not sit in the actual foot-print of the building, only in the Met Center parking lot.  In addition in 2004, the new American Boulevard was re-routed through the east end of the property.  The remainder of the site is planned long-term to become the site of Mall of America Phase II, of which the IKEA would be the anchor store.  The only remaining remnant of the Met Center being there for years, was the lone aged & rusted East parking lot metal sign that stood to let fans remember which lot they parked in (South-East-West parking lots surrounded Met Center.)  The sign was removed in September 2013 and was sold in a live silent auction, held at a local sports celebrity gala to benefit the Minnesota Juvenile Diabetes Research Foundation.

The "Arena of the Stars" that never was...

On the heels of the North Stars triumph over Chicago in the first round of the 1991 NHL playoffs, North Stars' owner Norman Green announced plans to "re-model Met Center into an arena-shopping center/restaurant complex that would be second to none" to spend up to $30 Million to upgrade Met Center.  The Minnesota North Stars revealed these future plans as shown of the architectural drawings of the remodel of Met Center arena- that would have been renamed the Arena of the Stars with plans that called for a skyway to be erected between the adjacent Mall of America, with new hotels to be built as well.  Team owner Norm Green would have needed approval from the City of Bloomington, and the Metropolitan Sports Facilities Commission - whom owned the Met Center arena and the 53-acre site that leased the Met to the North Stars for $220,000 a year.  "The plan is cancelled, as it is not possible without the Sport Commission's approval, and they didn't give it to us.  They've turned down our proposal, so the major uplifting is not going to happen, but we'll still do some freshening up there [Met Center]." - Norm Green quote June 2, 1991.  Green did not elaborate at the time, but the 1992-1993 season was the now infamous "Stars, working harder than ever" campaign and revealed newly wrapped maroon seating throughout the Met - taking away the iconic kelly, gold, black and white seating.  Bill Lester, executive director of the Sports Facilities Commission said that "Green's offer was rejected because it included a purchase price for the Met Center, and surrounding property that was much too low".  As history shows the North Stars relocated to Dallas Texas for the 1993-1994 season, and sadly on December 13, 1994 the original Met Center was demolished making way for a parking lot, and Ikea store many years later that lies adjacent to the actual footprint of where Met Center stood. 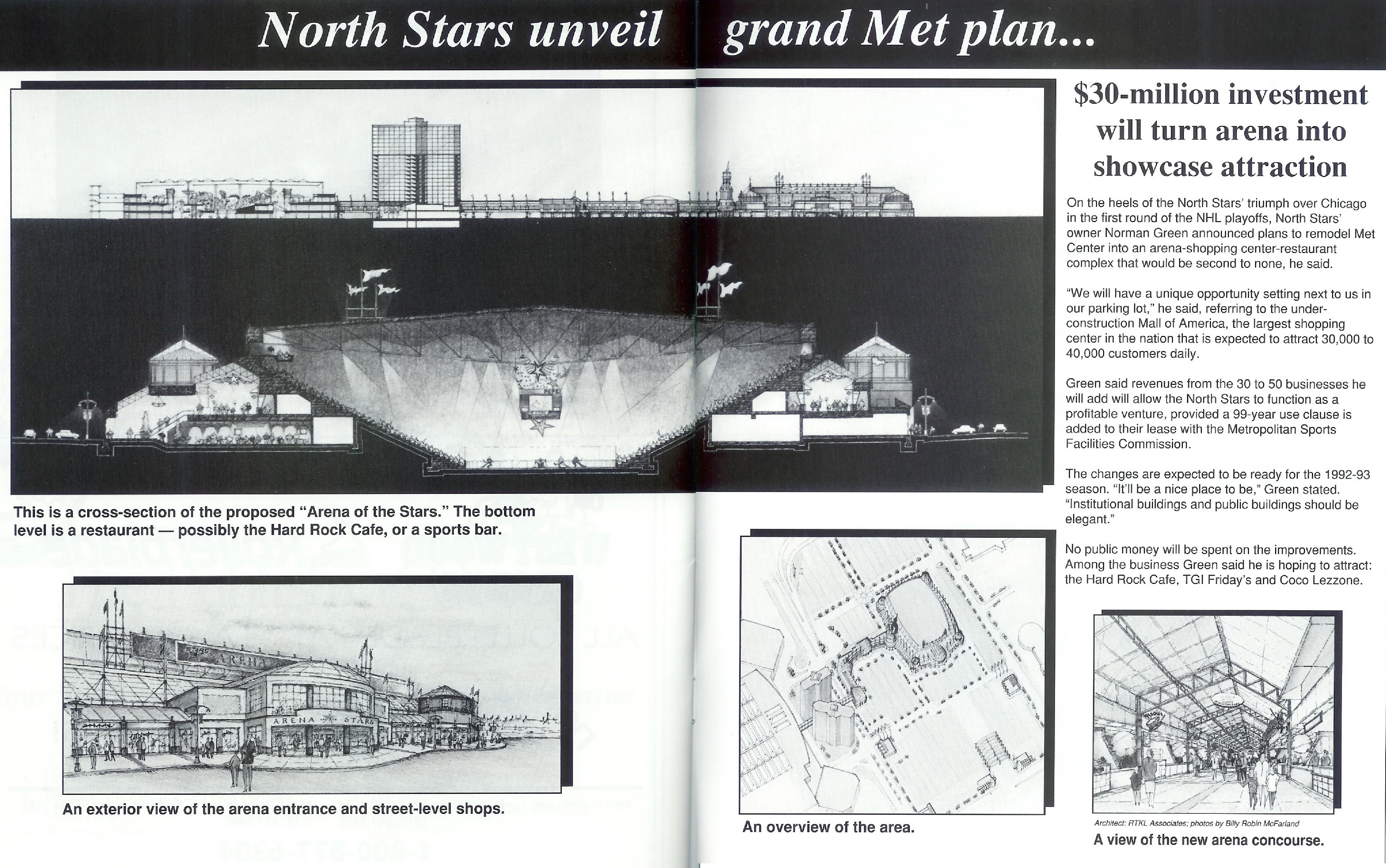 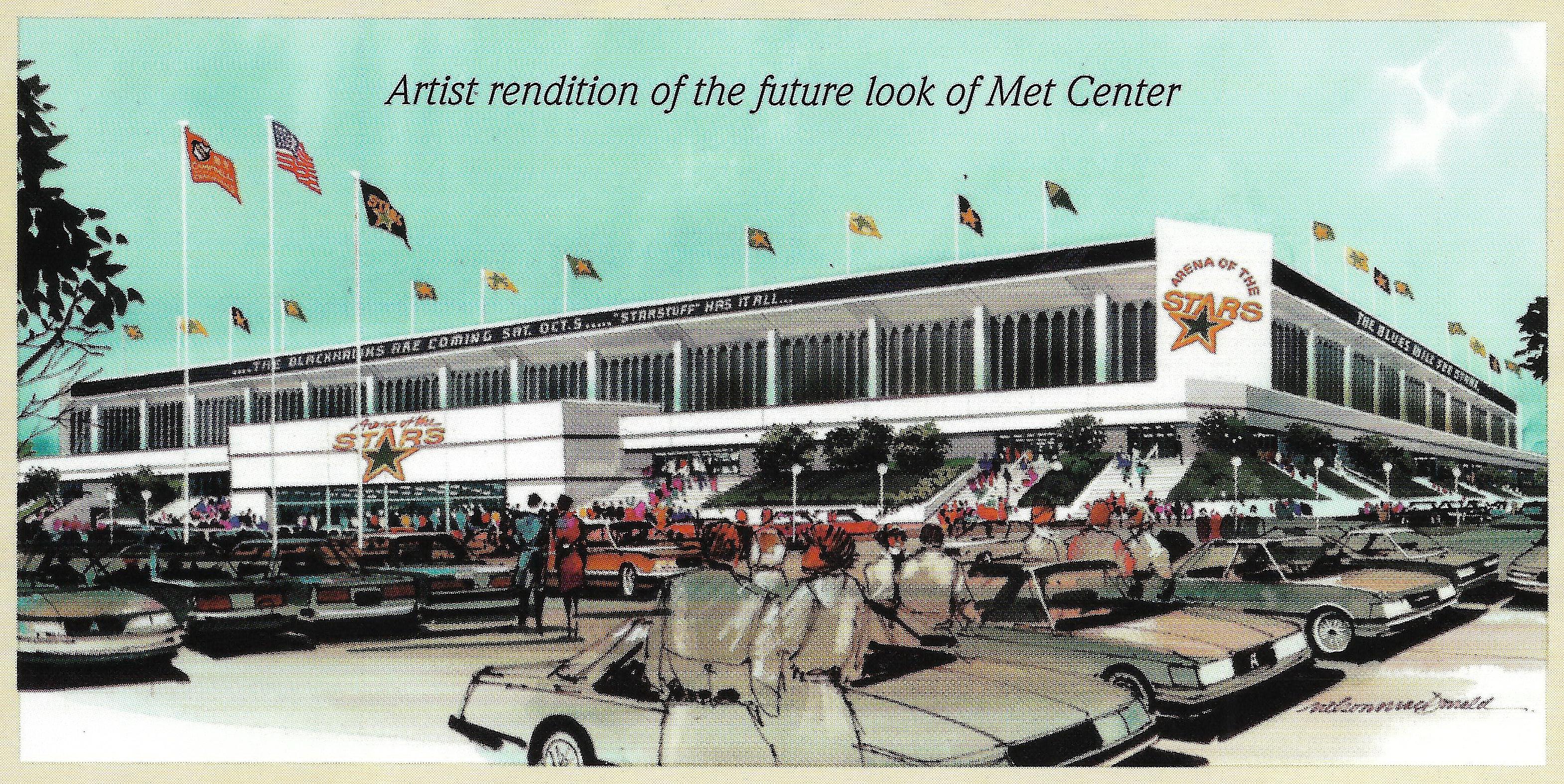 The Minnesota Wilds home ice at the Xcel Energy Center is nice but boy do we miss this old barn!  Enjoy this personal guided building tour of the Met Center.  Including footage of the North Stars locker-room.  What is that by the way in Gaétan Duchesnes locker stall? R.I.P. "Duke"

Video graciously donated for use by: Fred Teigen

The Implosion of the Met Center was carried live by special report on KSTP Channel 5 news.  The 27 year old building appears to not "go down lightly".  Great interviews and footage with Walter Bush and Tom Reid.