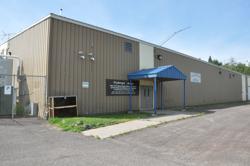 Fryberger Arena is located at the juncture of Isanti Street and Allendale Ave. in Duluth, MN and lies alongside Woodland Recreation YMCA center, and the historic Woodland Whalers outdoor rinks.  Fryberger Arena was built in 1972 as a one-sheet faciliity with a slightly smaller that standard sheet of artificial ice measuring at 188' x 85', and has seating for only 400 spectators on wood bleachers.  For over 50+ years, the history rich Duluth East High School hockey team, and the Duluth Amateur Hockey Association called Fryberger Arena home until the Duluth Heritage Sports Arena was built. Sometimes referred to as Freezeburrrger arena for it's frigid interior temperatures, and rock-hard ice, Fryberger was aptly named and dedicated in the honor of Robert M. Fryberger - "Friend of Hockey.  May his true sportsmanship and dedication to the development of youth hockey be an example to all".

In 2022, Fryberger Arena celebrated the 50th anniversary of operation within the port city.