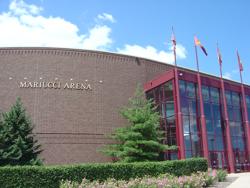 Since 1993 the "new" Mariucci Arena delivered a new look for the Golden Gophers Men's ice hockey team.  The arena is named after John Mariucci, the former player, and longtime Gopher coach whom is considered the "Godfather of Minnesota hockey."  The ice sheet originally opened with an Olympic sized (200 x 100 feet, the "old Mariucci ice surface was 200 x 85 feet) and seats approximately 10,000 fans (9,600 in the main bowl plus club room and suite seating).  The Minnesota Gophers women's ice hockey team played at Mariucci from 1997 until 2002 when they moved to the smaller on campus venue at Ridder Arena.  The main lobby of Mariucci arena is named after George Lyon, whom was a long-time supporter of Golden Gopher Hockey. The Lyon family dedicated a generous portion of his estate to Mariucci Arena.  The concourse of Mariucci is virtually a shrine to Gophers Hockey featuring every U of M team photo(s), Hobey Baker award, Herb Brooks, and Olympic Memorial, and the All-American wall featuring all the past Gophers All-Americans that proudly wore the sacred "M", the banners from the rafters prove that the UofM is truly legendary!

Mariucci Arena has been host to prominent regional, national, and international competitions, including the 2005 West Regional of the NCAA men's ice hockey tournament, the 2006 Frozen Four in women's ice hockey, and the 2006 World Short Track speed skating event.  Mariucci Arena also hosted the inaugural Women's Frozen Four on March 23 and March 25, 2001.  The MSHSL (Minnesota State High School League) state hockey tournament holds its consolation bracket games at Mariucci.  From 1950 to 1993 the hockey team played in the hockey arena section of Williams Arena, that was later renamed Mariucci Arena in 1985.  People now general refer to that as the "old barn" Mariucci Arena. In 2007, Sports Illustrated On Campus named Mariucci Arena one the top ten venues in college sports. Mariuccci Arena was the only ice hockey arena to make the list.

Before the 2012-13 hockey season, the University of Minnesota upgraded Mariucci Arena, which saw the replacement of the old scoreboard with a new state of the art Daktronics video-board and the addition of a fascia display that rings the arena.

In May 2014, a proposal for an $8 million renovation to the arena was announced.  The renovations would include reducing the ice sheet to approximately 200 feet x 92.5 feet, increased seating capacity, improved sight lines and upgraded weight, locker-rooms, and team facilities.  The entire completed renovation was  funded privately.  The reduced-size playing surface allowed for playing style to be more similar to the NHL, which has a standard 200 feet × 85 feet sized rink, and matches that of "Old Mariucci Arena".

On July 10th 2017, Maplewood, Minnesota-based 3M bought the naming rights of Mariucci Arena, following an announcement by the University that they were selling naming rights to various buildings on campus - a decision which was met with both optimism and criticism by local media and fans.  3M company payed $11,200,000 for 14 years (through 2031).  The building is now aplty called: 3M Arena at Mariucci.

Source: Portions of this article from UofM Media Guide 1996-1997