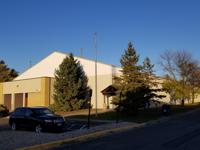 The Harold J. Pond Sports Center is located at the corner of Alder Road and Commerce Blvd. (2121) in downtown Mound, MN and is home ice arena to the Mound Westonka Hockey Association - formerly called Westonka Mohawks (today WhiteHawks).  The building itself and the city of Mound is located near the shores of spacious Lake Minnetonka.  Built in 1980, and opened in November 1981 - the arena itself outwardly appears to be less than 10 years old.  When entering the building - it is almost as if one steps inside a time capsule back to the 1980's, and has a lot of character that screams vintage.  With seating for over 800 spectators, on wooden bleachers, adjacent concession stand in the lobby and entrance areas, and a small press box located above the penalty boxes and scorers table - the Harold J. Pond Arena is an amazing venue yet today.

Pond Arena is a private non-profit facility owned by the Westonka - Orono Sports Center Association.  It is sponsored equally by Mound Westonka Association and Orono Hockey Boosters and is dedicated to the joint benefit of children in each school districts.  The story of the formerly named Lake Area Sports Center started in the early 1980's when the mere idea to have an indoor arena was born.  Much fundraising took place, including community dances and garage sales to benefit the arena construction.  Many large contributing parties and businesses took part in the effort to have the building raised.

Groundbreaking of the arena took place Saturday November 22, 1980 - that was initially called Lake Area Sports Center at the time.  By then, $450,000 had been pledged by individual organizations and businesses.  Prior to the construction, an additional $150,000 was needed to complete the project.  The final go-ahead to hold the ground breaking and place pilons came just before the ground was frozen on November 17, 1980 from Westonka School Board members in a special meeting - that was defeated just 2 years prior.  A year later, after the foundation pilons had been sitting for some time, the building steel started to take shape; "It's only a shell of a dream, but it's there - and you can see and touch it said Ron Roelofs co-chairman of the Lake Area Sports Center.  At the time of construction, the arena was the biggest building in downtown that was located next to Tonka Toys.  "The walls are going up this week, and it will be totally enclosed by the end of the first week of August, but people don't realize that we don't have enough money yet, we have more than $100,000 to finish it up" said Jim Paradise (July 1981).

Fund-raising efforts that raised north of $700,000 in donations, and 1000's of volunteer hours, volunteer labor and contractors the arena would have cost north of $1.2M in total to build the arena.  With the rink already enclosed, Mr. Harold J. Pond generous donation to the Lake Area Sports Center sealed the fundraising to complete the arena. 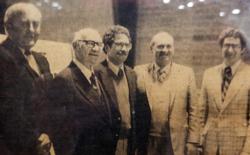 The Board made the unanimous decision to rename the building after him for his generous donation of $100,000.  Pond, and avid hockey fan and hockey playing family, with his brother Frank Pond was the 3rd ever hockey Coach at the University of Minnesota from 1930-1935, and all four of Harolds' grandsons played hockey in high school and college. Harold was the founder and Board Chairman of Advance Machine Co, which was located in Spring Park - his company produced floor scrubbers and other industrial cleaning equipment.  The Pond family presented the arena board the check, who had been looking for that one big donor for many months.  "Ponds contribution was the cherry on top of some kind of sundae, and came just in time" said Westonka Coach Pat Furlong.

The major contributors of the project included; Ms. Dee Inc, General Mills, and Advance Machine Company.  Each company and party that contributed to the advance fundraising and contributions to build the arena, received a plaque with names added to the Wall-of-Fame with those distinguished into: Commanders & Lieutenants contributors - broken down further into each category based on contributions of: Admirals (>$25K), Commodores (>$10K), and Captains (>$5K).   Original Board members Ron Roelofs, Jim Paradise, Bill Duryea, Doug Kirschner and Dick Larson were honored at the dedication ceremony in a special presentation and given life-long passes to the arena.

Pond Arena was dedicated on April 30, 1981 with WCCO radio personality Roger Erickson as master of ceremonies.  The 'Road to Fame' mural was unveiled - that still hangs in the arena lobby/concession area - that features newspaper clippings and articles from the spark as a dream of local hockey enthusiasts, through years of work and fund-raising to the official ground breaking and event dedication of Pond Arena.  Accepting on behalf of Harold Pond was Kent and Barb Allen of Advance Machine Company.  Barb is daughter to Mr. Harold Pond - whose name bears the arena.

John Mariucci and Let's Play Hockey Magazine owner - Bob Utecht spoke at the dedication and fit the Pond Arena into the Minnesota overall perspective.  Many took away Utechts' quote from the night - 'you pay the price to play hockey'.  Then rival Coaches, and partners in the building in Mound, then Coaches - Pat Furlong, and Orono Coach Leo Gosling spoke and thanked everyone for their dedication to the community and special thanks was mutually given to Arena Manager - Jerry Kohl.

The two rival High Schools finally had a place to call home, under one roof, and were happy as they were slowly being evicted from other neighboring arenas due to lack of available ice-time for both practices and games alike.  The first games within the building were in December of 1981 with Mound facing nearby Wayzata.  The Trojans from Wayzata spoiled the opening party by handily beating the Mohawks 12-3. The same week, Orono played their first home game within Pond Arena defeating visiting Shakopee 9-3.