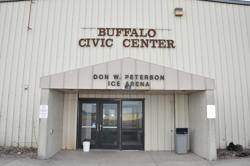 Nowadays, Buffalo hockey is a hockey town both in facility and attitude. Fans can watch games on two different indoor rinks, protected from the cold Minnesota winter winds in the flat Western metro terrain.  Players dress in huge locker rooms and prepare at attached weight rooms and dryland training areas.  Coaches have their own dressing rooms and walk the spacious bench areas unobstructed.  Hundreds of players – instructed by dozens of coaches and watched by thousands of fans – participate every year in some level of Buffalo hockey.

But it wasn’t always that way.

All fans, players and coaches who participate in a hockey game in Buffalo’s state-of-the-art Civic Center complex should realize hockey wasn’t always held in such posh accommodations.  Before booming Buffalo became a hockey town it is today, a group of pioneers had to have the vision and persistence to turn a small, sleepy country burb into a hockey haven.  On Thursday January 8th, 2001 ten of the original Buffalo hockey pioneers were honored at the inaugural class of the Buffalo Hockey Hall of Fame. Dan Ackmann, Sam Ackmann, Thomas “Doc” Ahrens, Darin Hahn, Steve Heyerdahl, Floyd Ingersoll, Roger Lunden, Leonard Lynch, Donald W. Peterson and Gary Wagner comprise the first – but not only – group of Hall of Famers.  “We thought it would be a great idea to honor the people who built the program” said then Head Coach Mike MacMillan, also a member of the Hall of Fame selection committee.  “I don’t think you can build a program with recognizing the past; those who laid the foundation.”  Donald “Donnie” Peterson is one of the first names that should come to mind when you think about Buffalo hockey, without Donnie Buffalo wouldn’t have had the first rink, and probably not the second one either.  Peterson took the financial risk and put up the first building.  He got everyone in Buffalo to believe the town needed it.  Peterson was the key figure in brining Buffalo hockey indoors, organizing the first meeting about the proposed Civic Center and telling all who would listen that it was needed.  Peterson mortgaged his land and home to purchase the steel building that would eventually become the first Civic Center.  But he didn’t have enough funds to erect it so it sat neglected until he could raise more funding. Peterson found a Zamboni on Long Island and talked to Bjorklund Trucking into picking it up and bringing it back when they were out doing a delivery.  Peterson also made a trip to St. Louis and found some boards and a cooling plant and arranged to have it sent up as well. That’s the way things got done – a little bit at a time.  Shortly after the arena opened on November 18, 1977 for an open house, Peterson was honored at a dedication ceremony held on December 4, 1977 in which the building was renamed the Donald W. Peterson Arena in his honor for "Years of endless contributions and services rendered toward the promotion of Buffalo Youth Hockey and the original arena".  The second newer Civic Center was added to the buildings East side in May of 2001 for the official groundbreaking and opened 7 months later on December 8th, 2001 when the $3.5 million building project was unveiled to the public.  The Buffalo Varsity team helped to kick off the opening celebration by beating the visiting Minnetonka Skippers 6-1. Between the dasher boards, the newer Civic Center ice surface measures up as identical to the older rink at 200x85 ft.  But it’s what is located outside of the ice surface that everyone in Buffalo is so excited about in the Buffalo Area hockey community.  “The new Civic Center is a jewel for the community, the community has seen it, and knows that it’s theirs.  They’re very proud of it and they should be.”  - Mike MacMillan (Former Buffalo Head Coach)

Before 1974 hockey in Buffalo consisted of a handful of youth teams playing their games on an outdoor rink at Sturges Park.  The rink was well-cared for, however, attracting interest from several sources in expanding the program.

1974-1975 – The First Junior Varsity team is formed from players who rose through the ranks, including Dave Zumbusch, Mark Ziegler, Jeff Solarz and Eric Ogren.  From the influences of past Coaches such as Leonard Lynch, Doug Lane, Dale Peterson and Thomas “Doc” Ahrens, the foundations of a program were built.

October 1975 – Donnie Peterson presents a feasibility study to the Buffalo Association of Commerce for the construction of an indoor rink.  The claim is that it will be home to the six-team youth hockey league from around the country.  No mention is made of a varsity team yet.  Peterson hopes to have all funds raised by December of 1975.

December 1975 – The drive is extended with the group at 78% of its goal. Peterson also apparently applies for a federal grant to help construct the arena, causing a delay of a year and a half in construction.  The second Junior Varsity season opens with a 4-3 win at Osseo.

March 1976 – The Junior Varsity season ends with a successful 6-3-3 record, but has four of its games cancelled due to weather, a hazard when home games are played outdoors.  Eric Ogren lead the team in scoring with 10 goals.

December 4, 1977 – The arena is renamed the Donald W. Peterson Arena at a dedication ceremony.

December 8, 2001 – The newer Buffalo Civic Center opening ceremony took place with a nightcap game between Buffalo hosting the visiting Minnetonka Skippers to a 6-1 win for Buffalo.


Special Thanks to Arena Manager Lee Ryan for history regarding BYHA and a tour of the Civic Center.