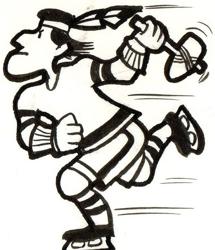 Boucha, Oshie, Sargent - Minnesota hockey names that are forever synonomous when taking a look at Minnesota's rich hockey history and the Indian communities where they were cheered on by their native sons from Red Lake, MN to "Hockey Town USA"  in Warroad - northern Minnesotas Canadian border town - in which the name Warroad itself seems to have derived from the practice of Indian tribes using the location, which is now the town, as a route to war upon each other.  In recent years, the Indian nicknames of Chiefs, Braves, Indians, Warriors, Redskins, Sioux, and so on have become mainstream in local and National media outlets, and most notably with the recent University of North Dakota Fighting Sioux NCAA nickname being officially retired by the University on May 14, 2009 - from a motion passed by the North Dakota State Board of Higher Education that read as follows:

Thursday, May 14, 2009 the North Dakota State Board of Higher Education passed the following unanimous motion: 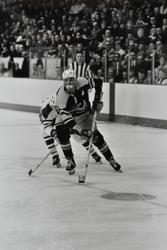 Consistent with the terms and conditions of the October 26, 2007 Settlement Agreement entered into with the NCAA, the Board directs UND officials to retire the 'Sioux' nickname and logo, effective October 1, 2009.  Full retirement of the nickname and logo shall be completed no later than August 1, 2010.  In the event a new nickname and logo is adopted by UND, they shall not violate the NCAA policy regarding Native American nicknames, mascots and imagery.

UND is further directed to undertake actions consistent with the Settlement Agreement to protect its intellectual property rights in the 'Fighting Sioux' nickname and mark.  UND is further directed to address the imagery at Ralph Engelstad Arena and other venues pursuant to the terms, conditions and timelines set forth in the Settlement Agreement.  This directive shall be suspended, if prior to October 1, 2009 the following should happen:

1. The Standing Rock Sioux tribe and the Spirit Lake Sioux tribe give namesake approval consistent with the terms of the Settlement Agreement; and

2. The namesake approval be binding upon the tribes for a period not less than thirty (30) years.

If an agreement is not reached with the Standing Rock Sioux and the Spirit Lake Sioux Tribes prior to Oct. 1, I will call on ALL members of the University community -- both on and off campus -- to work with me, administrators, faculty, staff and students, to create new traditions based on our continued and shared vision of academic and athletic excellence and success. 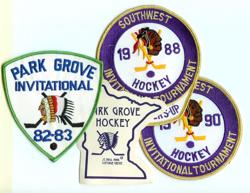 When looking at the annals of Minnesota State High School league (MSHSL) history, one can easily see the former team names of several Indian nicknames, and the crests that adorned the uniforms that reveal names and imagery of Native Americans.  The interesting question was recently posed of us:  "When DID the MSHSL ban Indian nicknames for High Schools in Minnesota".  The answer starts back in 1967 with the first documented evidence of activism on this issue when Mankato State University began a ten-year debate to change its logo and nickname from the "Indians", to the "Mavericks".  A new president and the efforts of University activists ended the debate in 1977 when the Indians officially became the Mavericks on July 1, 1977.  Thus, the long history of activism on issues of American Indian mascots and nicknames in Minnesota seems to have found its roots on the Mankato campus, not far from the location of the largest federal execution in U.S. history when thirty-eight Dakota Indians were hanged in 1862.  The origins of activism on this issue in Minnesota sprang from the same geographic area that silenced the voices and extinguished the lives of American Indians a century earlier. At the High School level, Minneapolis Southwest High School (previously known as the Indians - Lakers today), and a social worker named Phil St. John. Southwest H.S. set the example for the rest of the country when the City of Minneapolis Board of Education passed down judgement that: "Nicknames that perpetuate racial or ethnic stereotypes would no longer be allowed in the city's schools". Thanks to the efforts of Phil St. John, a social worker who's a Sioux, and to a blunt but effective poster created as a public service by a local advertising agency, the Minneapolis public school system has set a commendable example for the rest of the country. St. John and his two sons, Terry, 17, and Philip Jr., 9, attended a basketball game back in 1988 involving Minneapolis's Southwest Secondary, whose teams were then known as the Indians.  According to St. John, a white Southwest student in the stands, war-painted, head banded and attired in a fringed getup, engaged in what was supposed to be Indian behavior—war whoops, menacing gestures and the like. Philip Jr. was both startled and confused.  He huddled close to his father, who said, "I figured I had tolerated that kind of stuff most of my life, and it was time I had to do something."

St. John set out to persuade Southwest students, Administrators and the Minneapolis Board of Education that athletic teams should not be nicknamed Indians or Braves or Chiefs because such names trivialize Native American heritage and perpetuate stereotypes.  At first, school officials denied any knowledge of the incident in the stands, but the PTA and Southwest's student council and faculty all voted to support St. John's proposal. The Minnesota-Dakotas office of the National Conference of Christians and Jews (NCCJ) then offered to help St. John, and so did the Martin/Williams advertising agency, which came up with the poster.

The efforts paid off.  Southwest changed its nickname to the Lakers, and the Board of Education ruled that nicknames that perpetuate racial or ethnic stereotypes would no longer be allowed in the city's schools. Meanwhile the local NCCJ began sending copies of the poster all over the country.  "It conveyed the message in a glance," says Pat Helmberger, the NCCJ associate regional director.  "It doesn't take two days of sensitivity training to get it across."

St. John hoped colleges and pro teams got the message.  His ultimate, and perhaps quixotic, goal was to change the name of the Washington Redskins. "That's the most racist and derogatory name you can use to describe the American Indian people," he said.  And yes, the State High School League got the message too.

Following in Minneapolis Southwest lead, the MSHSL acted in accordance to the resolution set forth on May 10, 1988 to advise schools to change school mascots/nicknames that read as follows:

URGING THE ELIMINATION OF THE USE OF RACIALLY DEROGATORY MASCOTS, SYMBOLS, OR EMBLEMS IN SCHOOLS THROUGHOUT THE STATE OF MINNESOTA

WHEREAS, the practice of using mascots, emblems, or symbols disparages the ethnic heritage of American Indian students in the public education system where students are entitled to a quality educational environment regardless of race or color.

NOW THEREFORE BE IT RESOLVED, the Minnesota State Board of Education finds the use of mascots, emblems, or symbols depicting the American Indian culture or race unacceptable, and

BE IT FURTHER RESOLVED, it is the desire if the State Board of Education that no school district in the state of Minnesota shall have a mascot, namesake, official symbol, team name, newspaper, yearbook, or any official group or publication bearing the name of any American Indian symbol or cultural reference.   Academic classes and/or clubs such as American Indian history, American Indian culture, Black history, or Black culture which are specifically aimed at exploring these issues are not discouraged through this resolution, and

BE IT FURTHER RESOLVED, the Minnesota State Board of Education encourages all boards of education in the various Minnesota school districts to immediately commence or proceed to remove such mascots, emblems, or symbols from the public education system.

BE IT FURTHER RESOLVED, that the State Board of Education states its intention to review the progress made by public schools in fulfilling this resolution.  This review is to take place at the State Board's December 1988 meeting.

This resolution approved by the State Board of Education this 10th Day of May 1988.

Upon researching former and current alike "Hockey nicknames and/or logos that depict Indians" we came up with the following list.  Of which, only Benson (Braves), Mahnomen (Indians), Sleepy Eye (Indians) and Warroad (Warriors) today retain their Indian logos and imagery on sports uniforms.  If we are missing any teams/names please let us know and we will add them to this list. 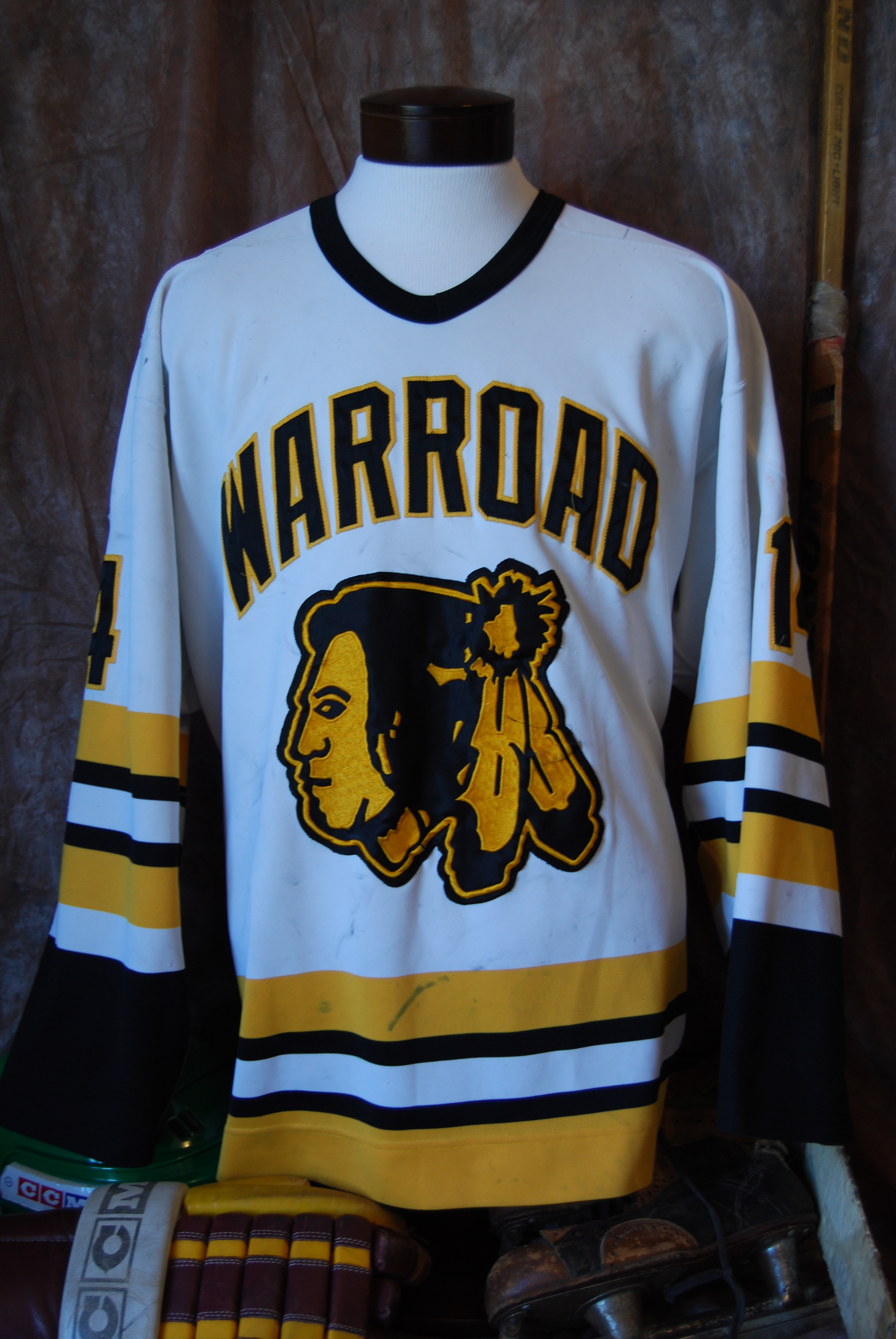 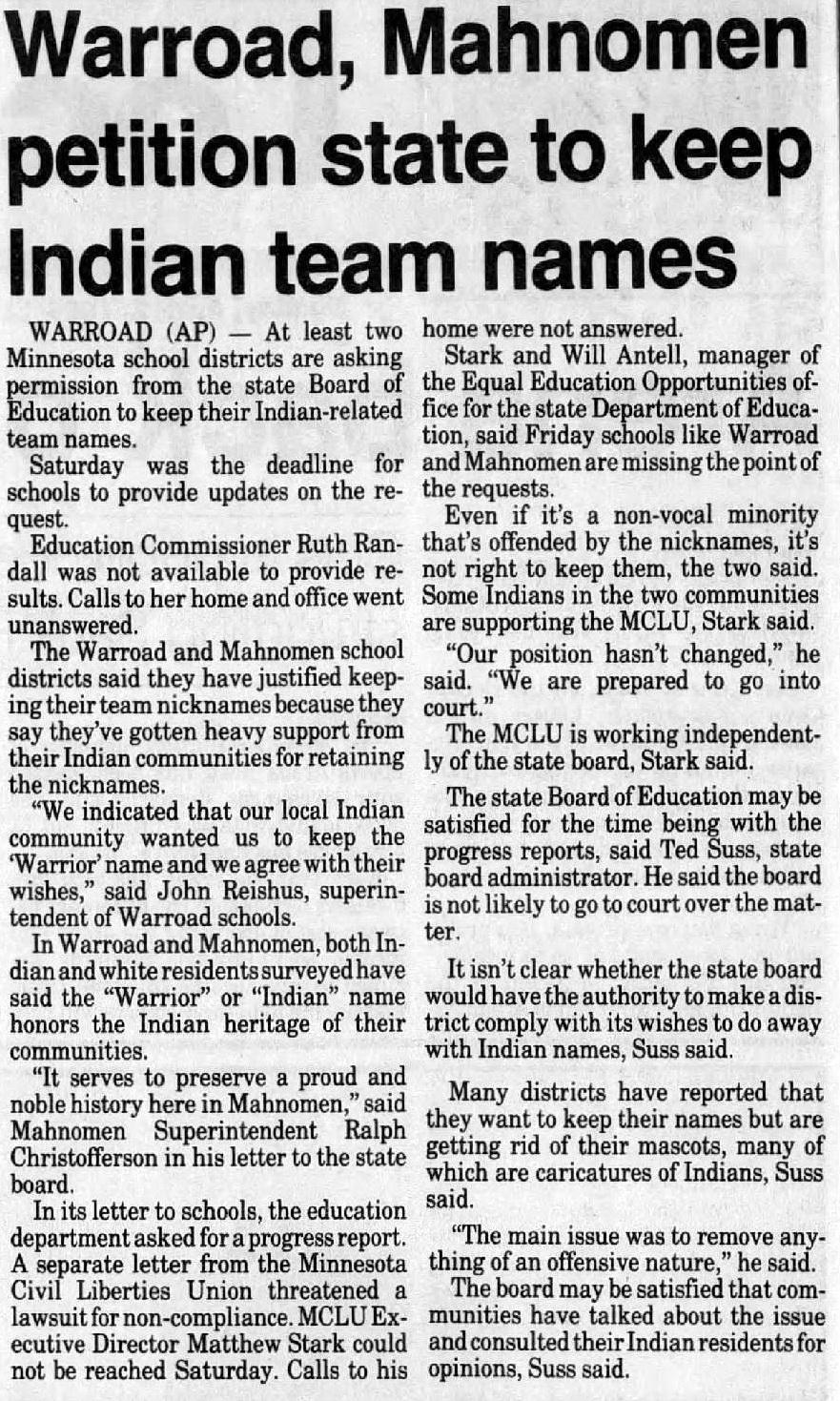 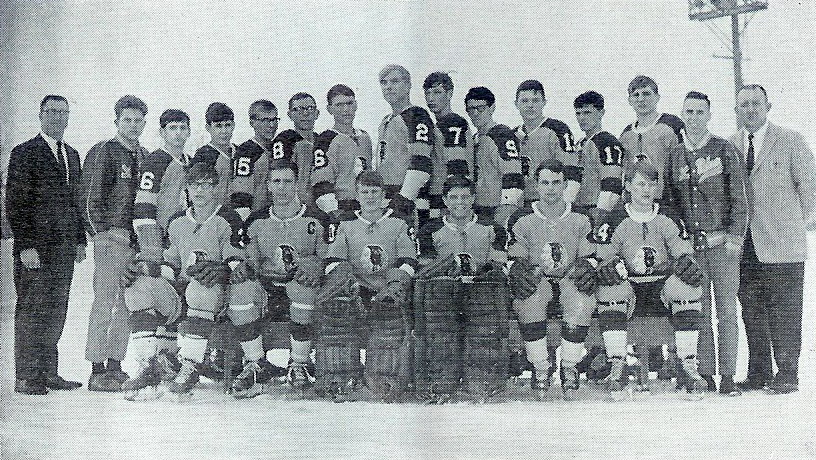 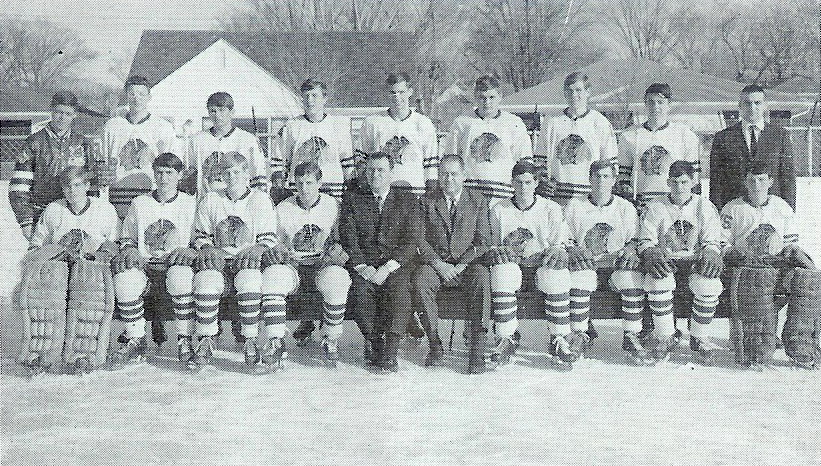 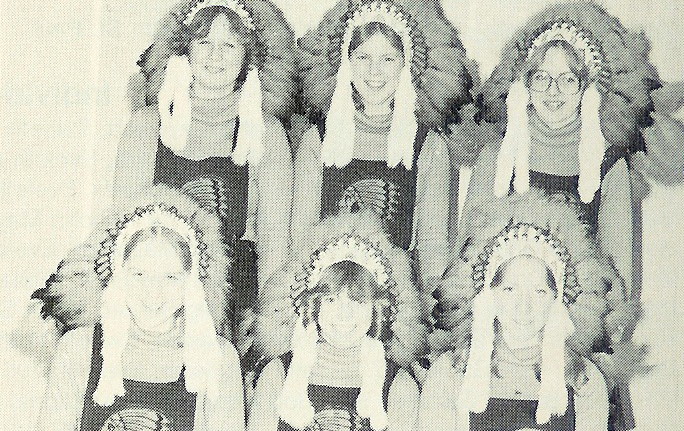 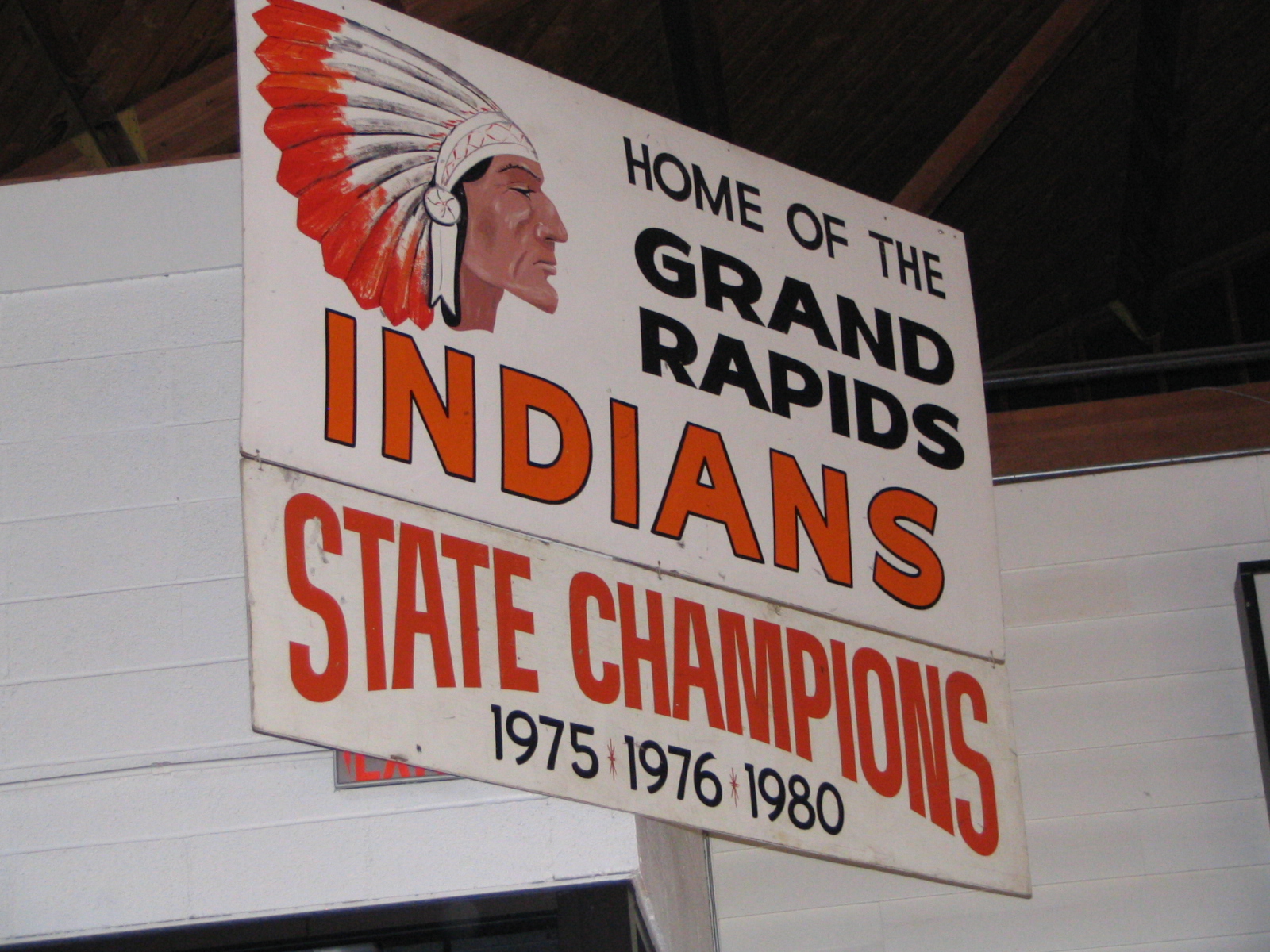 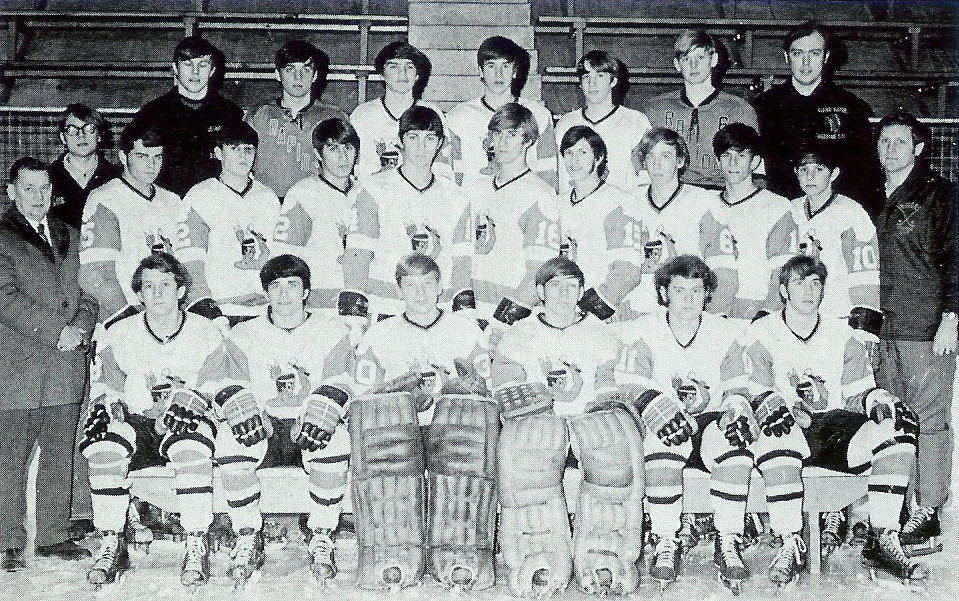 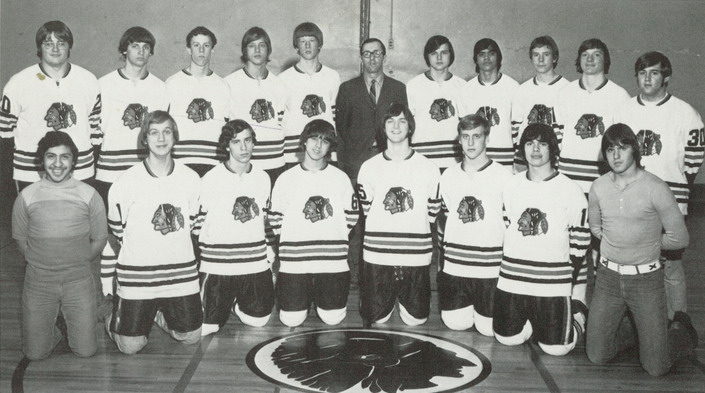