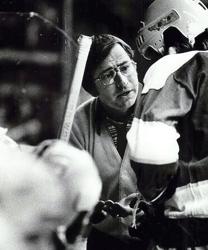 Doug Woog’s name has been synonymous with Minnesota hockey for over 50 years.  As a player, he led South St. Paul High School to four Minnesota State High School Hockey Tournaments and garnered all-state honors three times.  Woog went on to play at the University of Minnesota under Coach John Mariucci where he became an All-American as a junior and the team’s Most Valuable Player his senior year.  He graduated with honors in 1967 and went on to earn a Masters Degree in Guidance and Counseling from the College of St. Thomas.

In 1971, Woog took a position with the Minnesota Junior Stars who later became the St. Paul Vulcans.  He led his teams to two U.S. Junior National titles before returning to South St. Paul as the head hockey coach in 1977.  Over the next six years, his Packer teams would win two conference titles and advance to the state tournament four times. During his tenure at South St. Paul, Coach Woog also developed Phil Housley who would go on to become the greatest American defenseman in history.

Woog returned to the University of Minnesota in 1985 to lead the Golden Gophers hockey program.  He led the Gophers to four regular season and three postseason championships during a 14-year span.  His teams reached the NCAA tournament 12 times, posted seven 30-win seasons, and appeared in six Frozen Fours.  He finished his coaching career as the program’s all-time win’s leader compiling a record of 390-188-40.  Woog resigned as the head coach in 1999 to take an assistant Athletic Director position.