Lyn Ellingson grew up in Duluth in the community of Kenwood, north of the University of Minnesota Duluth campus.  Lyn played at the local rinks and was part of the Duluth Amateur Hockey Association.  Every local community sponsored pony through bantam teams, and traveling to play a local team was just inside of the city of Duluth.  Lyn was fortunate to have two older brothers that included him in all the shinny games played every Sunday afternoon.

Lyn went on to play high school hockey at Duluth Central, graduating in 1969.  Upon graduation Lyn was given the opportunity to play or his home-town UMD from 1969-1973.  Lyn graduated with a degree in business administration and economics - his coaching career resulted from the recession of 1973.  Because of that, he returned to college earning a degree in social studies and a coaching certificate.

In the fall of 1975, Lyn again was very fortunate to land his first and only teaching job at Grand Rapids high school.  Gus Hendrickson and Mike Sertich were leaving Grand Rapids for UMD after they captured the 1975 State Championship.  Lyn joined a very young coaching staff including Jim Nelson (Roseau) and Buzz Christensen (International Falls) and their inexperience was a blessing.  They all thought it was easy, winning the State Championship again in 1976, and continued the run at the State Tournament through 1981, winning again in 1980.  By this time they knew how lucky and difficult those championships were to obtain.

In 1986, Lyn took over the head coaching position at Grand Rapids - a position he held until his retirement in 1999.  Grand Rapids reached the State Tournament three more times under Ellingsons' tutelage in 1988, 1990, 1991.  Lyn represented Section 7 on the Coaches Association Board from 1987 through 1992.  This time was dominated by the AA and A transition. It was a special experience for Lyn working with some great Minnesota hockey coaches.

Lyn really doesn't remember his coaching record, but just knows that they won more than they lost.  Great coaches always had great players, and he was blessed to have worked with so many great young men from supportive families in a community that loved their hockey teams.  His coaching philosophy was that extra curricular activities were to help build character and produce future leaders.  Winning was important, but how you won was equally important as well.  Lyn was very appreciative of School District #318 for giving him the opportunity to teach and coach at Grand Rapids high school. The 25+ years of coaching and 33 years of teaching economics were very fulfilling.  His goal of taking the job was to leave the program in the same shape it was when Gus Hendrickson left it in 1975.

Every coach must have great support staff, from assistant coaches, principals and athletic directors - Lyn had all of the above.  Most importantly was his support staff at home.  Without his wife Trish, and two daughters none of what Lyn accomplished throughout his career wouldn't have been possible without their understanding and support.

Lyn retired in 1999 to follow his daughters and their endeavors.  Following retirement Lyn and Trish spend a lot of time at their cabin on Lake Vermilion.  Lyn feels he owes more to the sport of hockey than hockey owes to him. 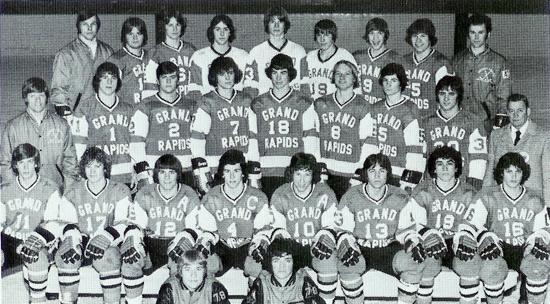