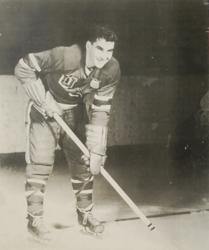 John was inducted into the Minnesota Hockey Coaches Association Hall of Fame in 1997.  Known by many for his accomplishments both on and off the ice as a player and coach.

As a player; John had a career that cannot be matched by many Minnesotans let alone many Americans.  He played his high school hockey in Eveleth, MN and as a member of two State Championship teams.  From Eveleth, John moved on to the University of Michigan.  While at Michigan, John was a member of three NCAA Championship teams in 1951, 1952 and 1953.  During his career as a player he received numerous honors, including All-American and twice being named to the NCAA All-Tournament team.  In 1997, John was named to the NCAA 50th Anniversary Hockey team.  John represented the United State on the National Team in 1955 and was an alternate captain in 1956 on the silver medal winning Olympic Team.  In 1991 John was inducted into the United States Hockey Hall of Fame. 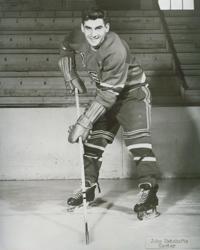 His coaching career began in Thief River Falls from 1956-1959.  he then returned home to Eveleth where he coached from 1960-1966.  After a very successful run in high school hockey, John accepted the head coach position at Colorado College.  He coached the Tigers from 1966-1970 where he was named WCHA Coach of the Year in 1969.  In 1970 John accepted another challenge when he took over coaching at the Air Force Academy.  John was the Falcon's head coach from 1970-1985.  John retired from coaching in 1985, but his tremondous impact can still be felt today.  Over the years many who had been fortunate enough to have come in contact with John always talked about the positive influence he had on the sport of hockey in Minnesota.

Following his retirement he remained in Colorado Springs, Colorado until his passing at the age of 82 on November 19, 2013 at his home.