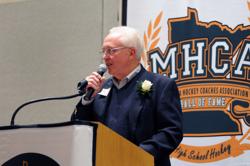 The Pioneers fell behind 7-2 in the second period in hostile Graham Arena in Rochester, and were down 7-3 at the end of the frame.  “We came back into the locker room and said, ‘What good is it gonna do to lose our last game?’ ” Skrypek said. “Are we just gonna take the night off and say, ‘Well we’re 19-1, instead of trying to win at the game that we play"?  Is that what we’re gonna do, just cave in?  In the third period some of their players, we had overheard them say that they were gonna hit double figures, and that they were gonna rub it in our face.

That didn’t sit very well with Hill-Murray.  “The light bulb went on and these guys said no there’s no way,” Skrypek said.  The Pioneers scored two short-handed goals and then two power play goals to tie the game. Mark Horvath completed the 8-7 comeback victory in overtime to seal a perfect regular season. “That was what to me told a little about the character of the team and that they weren’t gonna be denied,” Skrypek said. “I think that carried over into sections and the state tournament.”

Skrypek, who played at Cretin (before the all-boys school merged with Derham) in high school and St. Mary’s in college, spent 14 seasons at Hill-Murray and made 10 tournament appearances. He had a 325-44-3 record — an 87.3 winning percentage — to pair with his 1983 state title.  Skrypek also helped and inspired Lechner to build his own lengthy and accomplished coaching career. “He was a good role model, and I didn’t know how much until later to be honest,” Lechner said.  “He was very good with the kids and was organized and had success.”  After the 1987 season though, Skrypek jumped at an opportunity to coach for the University of St. Thomas.  “You look at certain things, and at the time I had four kids,” Skrypek said.  “There aren’t many college jobs available, and there weren’t that many out there, and this one opened up.  I thought well if I don’t take it somebody else is gonna take it, and they’re gonna have it for the next 15 years probably.  So I thought well if I’m gonna make a move the time is now.” Skrypek stayed with the Tommies for 23 seasons, retiring in 2010 after notching 419 victories.  He made 10 NCAA tournaments and won the 2005 Division III Hockey National Coach of the Year award.  Although retired, he helps as an assistant for the Cretin-Derham Hall girls’ team with John and Krissy Pohl. Skrypek played in high school and college with John’s father Jim.  “It’s been good, I enjoy it,” Skrypek said.  “I think the biggest thing is it lets me get in my skates and I enjoy getting out there and having fun.”

The Cliff Thompson Award is given for “long term outstanding contributions to the sport of hockey in Minnesota” according to the MHCA.  Skrypek certainly fits that bill.  “It’s really humbling,” Skrypek said.  “When you look at a list of guys who have won that award it’s like a who’s who of hockey.”  Skrypek’s undefeated season was his biggest hockey accomplishment when it happened, and now is just one apex in a career that influenced so many in Minnesota. “The history of Cliff Thompson was that he was an unbelievable coach and had nothing but respect from the community and his players.” Skrypek said.  “Just the fact that that the award is named after him makes me think ‘well gee maybe I did have an influence, I helped some kids in a positive way."