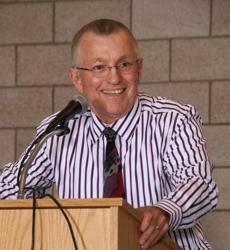 Bill Halbrehder was born in Duluth Minnesota in 1942.  His family moved to Superior, Wisconsin in the early 1950's and Bill started playing hockey there in 1955.  Bill was selected as the only American to play Junior hockey from 1959-1961 with the Moose Jaw Canucks of the SJHL  Bill was recruited to play for the UMD Bulldogs where he was a 3 year starter from 1961-1965. Bill played one year with the St. Paul Steers of the USHL with teammates Herb Brooks, Bill Masterton, George Konik and Coach Murray Williamson. Bill lost an eye in 1966 in an accident during practice at the end of a season. Bill received a Masters Degree from Bemidji State University in 1980.

Coach Halbrehder started teaching and coaching in 1965 in the Roseville school system for 3 years under Gordy Genz and Whitey Aus.  He was the head coach of the North St. Paul Boys team from 1968-1989.  While head coach of the Polars he compiled a record of 305-159-17.

Coach Halbrehder spent 5 years as an assistant coach with the Womens hockey program at Augsburg College, and served as head coach with the North St. Paul girls hockey squad.