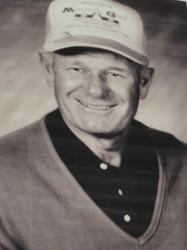 Gordy Genz grew up on St. Paul's West Side and attended Humboldt high school.  His outstanding student-athlete recognition at Humboldt (Humboldt H-Club Award Winner) earned him a scholarship to Hamline University.  At Hamline he lettered four years in both football and hockey, where is all-around, two-way performance in football, and his outstanding hockey play and team leadership earned him a 1987 induction into Hamline's Athletic Hall of Fame.  In 1967 he graduated from the University of Minnesota with an M.A. in Physical Education.

Genz coached teams reached the 500 win milestone in February 1992.  In 1994, Gordy was recognized by the Minnesota Hockey Coaches Association for "35 years of outstanding service to high school hockey", and was inducted into the MHCA Hall of Fame in 1996.  A life member of the Minnesota State High School Coaches Association and a long-time Section III-AA Delegate to that organization's Delegate Assembly, he was presented the "George Haun" award for outstanding service and leadership in 1995. Gordy has been a long-time member and served as President of the Minnesota Old Timer's Hockey Association.