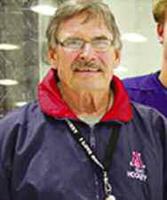 After more than four decades at the helm of the Albert Lea program, Roy Nystrom retired in 2017 with an overall coaching record of 705-499-23, including 612 victories with Albert Lea.  The 612 wins are the third-most ever by a high school hockey coach in Minnesota, behind only Lorne Grosso (707) and legendary Edina coach Willard Ikola (616).  Nystrom, who grew up in Eveleth, played college hockey at Minnesota from 1961-65.  Nystrom began his high school coaching career in North Dakota, first at Grafton, then at Grand Forks Central, where he won three state championships.  He moved to Albert Lea in 1974, where he taught physical education and special education, in addition to coaching hockey. He also coached for the Tigers' football and baseball teams at times over the past 43 years. Albert Lea won Big Nine Conference championships in 1993, 2009 and 2010 and section championships in 2004, 2005 and 2007.  Their best finish at a state tournament came in 2005, when they went 28-3 and finished fifth. Albert Lea placed sixth in its other two state tournament appearances.

The rink at Albert Lea City Arena has already been renamed in Nystrom's honor. He is also already a member of the Minnesota Hockey Coaches Association Hall of Fame and the Minnesota State High School League Coaches Hall of Fame.