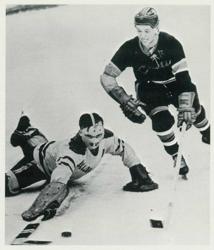 Jim grew up in St. Paul attending Cretin high school.  During his time at Cretin, he was fortunate enough to participate in two State Catholic Tournament Cretin squads that qualified in both 1965 and 1966. Jim  graduated from Cretin in 1966.  Following high school he spent the next four years at St. Mary's College in Winona where he was selected to the Minnesota Intercollegiate Athletic Conference All-Conference Team two times.

Jim was inducted in the Minnesota Hockey Coaches Association Hall of Fame in 1998, with a career record of 234-189-11 over the course of a 20-year career.  In 2006, Jim additionally was honored by St. Mary's University with an induction in the University Hall of Fame.

Jim's family includes four sons: Johnny, Mark, Mike and Tom.  Jim's proudest accomplishment is that all four of his sons "Played in the State High School Hockey Tournament, played in a Championship game, and were All-Tournament selections.  Additionally John Pohl, was named Mr. Hockey in 1998, later went on to win a National Championship with the University of Minnesota Gophers in 2002, and played in the NHL".