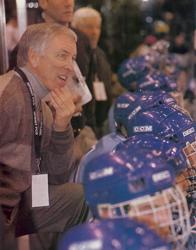 Mr. Saterdalen graduated in 1964 with a Bachelor of Science degree in physical education, having played both tennis and hockey for Bemidji State College.  Tom began his career as an assistant hockey coach at Cloquet, Minnesota and then became the assistant hockey coach at Bemidji State.  In 1986 Mr. Saterdalen became head hockey coach at Superior senior high in Superior, Wisconsin, where he won two State Championships.  From 1970-1973 Tom was the assistant hockey coach at the University of Minnesota under Herb Brooks.  Returning to high school coaching, Mr. Saterdalen became the hockey and tennis coach, as well as teacher at Jefferson high school in Bloomington, Minnesota.  His hockey record at Jefferson included 545 wins, 167 losses, and 21 ties.  Tom won 13 Lake Conference titles, 15 section titles, 7 State Championships (5 in Minnesota and 2 in Wisconsin), and three third place titles.  Tom was named Minnesota High School Coach of the Year in: 1981, 1988, 1989, 1992, 1993 and 1998.  In addition Sats won the Gunderson Award Lake Conference Coach of the Year four times.  In 1986 Tom was inducted into the Bemidji State University Athletic Hall of Fame.  Mr. Saterdalen also won the John Mariucci Award presented by the American College Hockey Coaches Association for 2003.  In all, Tom sent 70 players to Division I hockey, 85 to Division III, 21 to professional and 7 to the NHL.  Other recognitions include being inducted into the Minnesota High School Hockey Coaches Association Hall of Fame, and the Achievement Award for Distinguished Service to the Lake Conference.  Not only did Tom excel in the hockey world but also in the tennis world.  Sats record was 284 wins and 102 losses with 8 Lake Conference champions, 3 sectional champions, and 2 State Champions.  Mr. Saterdalen was voted Minnesota Coach of the Year in 1996.  In 2003 Tom was honored by the publication of a book that traced the development of his 2001-2002 hockey team at Jefferson as they made their way to the State Tournament - called "Blades of Glory", and Tom was the central character in the book.  Sats spent 30+ years organizing, training, and recruiting coaches and officials for the Youth Hockey League in Bloomington.  Sats also organized and presented numerous skill and fan clinics for youth and adults in both hockey and tennis. 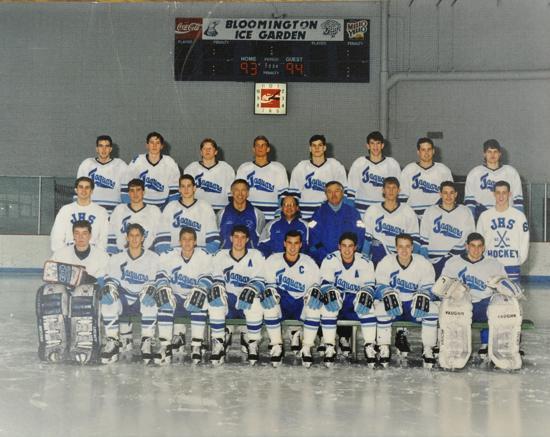