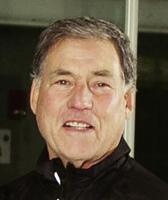 Bruce Johnson grew up in Robbinsdale, Minnesota.  His early experiences in hockey were on the frozen ponds and the outdoor neighborhood rink.  From these early experiences grew a life-long love for the game.  Johnson played high school hockey at Robbinsdale High, and collegiately at Augsburg College for legendary Auggie coach Ed Saugstad.  Bruce began coaching as a high school sophomore and has coached continually for the past 55 seasons.  He has coached all ages and abilities from mite through college.  Johnson began his high school coaching career at Richfield High School in 1968.  In 1970 Johnson was named as the first head coach of Robbinsdale Armstrong High School and served in that position until his retirement in March of 2002.  During his tenure Armstrong won 401 games and two Lake Conference championships.  Five of Johnson’s former Falcons have represented our country as members of a United States Olympic Hockey Team.  Seven of Johnson’s former players have playing experience in the NHL, including 2002 Hobey Baker winner Jordan Leopold, and Todd Richards, former head coach of the Minnesota Wild and the Columbus Bluejackets.  Also, a great source of pride to Bruce is the fact that many of his former players are involved in the game coaching in youth and high school ranks.  Since his retirement from Armstrong Johnson has served as an assistant coach at a number of stops.  He is currently an assistant at Buffalo High School working with his two sons, Aaron and Thomas. Throughout his career Johnson has been active in hockey administration from the local through state and national levels.  He has been a member of the Board of Directors of the Minnesota Hockey Coaches Association since 1978, serving as President of the organization from 1993-1995, and Executive Director from 1999-2006.  Bruce represented MHCA coaches on the Board of Minnesota Hockey from 1998-2008, and currently is a Director Emeritus.  Johnson has been honored by the MHCA as Section Coach of the Year four times, was named the 2001 John Mariucci State Coach of the Year, and in 2005 the Dave Peterson Award winner for leadership in youth hockey. In 2008 the MHCA began the Bruce Johnson Award to honor outstanding contributions to the Coaches Association and the sport of hockey.  Additionally, Johnson has been the recipient of several honors during his career.  He has received the Minnesota High School Coaches Association George Haun Award for leadership and service in the coaching profession and was named the Region 6 ”AA” Athletic Administrator of the Year by the Minnesota Athletic Administrators Association.  Bruce is an inductee into the MHCA Hall of Fame, the Augsburg University Athletic Hall of Fame, the Robbinsdale Armstrong High School Hall of Fame and was presented the Classic Lake Conference Distinguished Service Award in 2008.  In 2011 Johnson was honored by the American Hockey Coaches Association with the John “Snooks” Kelley Award for his lifetime contributions to the growth of amateur hockey in the United States.  Bruce and his deceased wife Lois are proud parents of three grown children; Leah (Todd), Thomas (Amanda), and Aaron (Kristi).  Bruce and his wife Theresa live in Plymouth and enjoy a blended family of eighteen children and grandchildren.