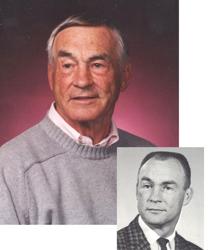 Roger "Bud" Leak was born and raised in Minneapolis and graduated from Central high school.  "Bud" then served in the Marine Corps in WWII.  After his years in the service he returned to school and graduated from Augsburg College in 1950.

Bud never played high school hockey as hockey was suspended during the war years. He did play in what was called the Arena League made up of older professional players closing down their careers, college players waiting for service, and some of the "lucky high school players".  Bud signed a professional baseball contract with the Minneapolis Millers in 1944 when there was a need for players due to the war.  After the Marines, Roger took on duties of coach and player for the hockey team at Augsburg College. Upon his graduation in 1950, it was back into the senior level and semi-professional levels of hockey in 1956 when the Culbertson team he was on won the State Championship.

Bud served as the varsity hockey coach at Minnetonka for 20 years and then became an assistant coach.  He additionally coached varsity baseball for 25 years and continued on as the sophomore coach for 25 more years.  He retired from full-time teaching in 1985 but substituted 60-70 days a year until 2000.  Bud was President of the Minnesota Hockey Association in 1967-1968.  He was inducted into the Coaches Hall of Fame in 1998.