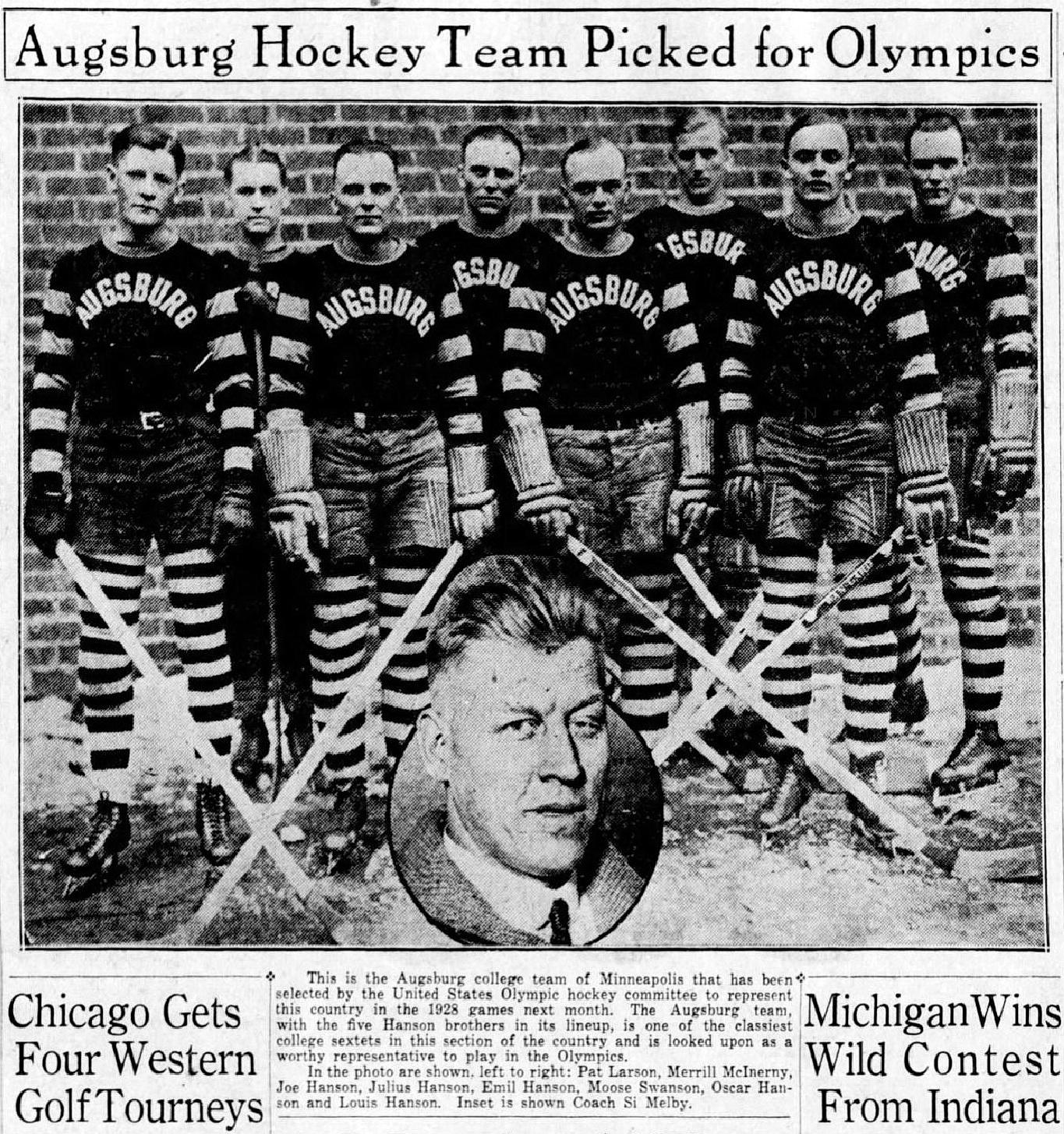 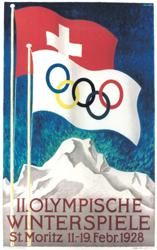 *The 1928 Olympics in St. Moritz, Switzerland were the third Olympic games in which hockey was an official sport, but deemed Winter II Games. (1st hockey appearance in Olympics was in VII Summer Games in 1920).  No Minnesota born hockey native was featured in the 1924 Olympics.  To field the best possible team the Americans had General Douglas MacArthur pick the hockey team.  General MacArthur the World War II (and World War I and Korean War) hero first approached the University of Minnesota along with teams from Boston and Chicago to play each other for the chance to represent the USA.  The proposed format was to play the playoff games in Chicago and Boston.  The invitation to compete for an Olympic bid was sent to University of Minnesota on December 9, 1927.   The games against Boston would be played in January, while the Winter games took place February 11-19, 1928.   The University of Minnesota likely declined the offer because of a combination of students missing too much class time and cost of sending the hockey team east and then to Switzerland - in such short of notice.  After the Gophers and Boston declined, General MacArthur approached Harvard, powerful Eveleth Junior College, and Augsburg to put on for the United States.  Eveleth initially accepted, but couldn't come up with the funding to travel to Europe.  Augsburg then accepted, and was approved.

William S. Haddock of Pittsburgh, chairman of the U.S. Olympic Hockey Committee, selected Augsburg as the American team to travel to St. Moritz, Switzerland to compete in the 1928 Winter Olympic games.  There was one stipulation: Augsburg would have to pay one-half of the trip's expenses.  Augsburg quickly prepared for the trip.  Passports were secured, and transportation arrangements made.  The team would travel to New York by train and warm up for the Olympics by playing either Harvard or Yale at Madison Square Gardens.  On January 25, 1928 the Auggies would set sail for Europe.

Augsburg Hockey coach Si Melby told the eight players on his team that they would be representing the United States in the Winter Olympic Games.  Although it was the first year they had played in a conference, the Augsburg team was already recognized as the collegiate power of the Midwest.   The Auggies had gone undefeated in 1927, winning an unofficial State Championship.  The 1928 team was also unbeaten, and its reputation as a powerhouse spread.  Fans nicknamed the squad the "Hansons of Augsburg," for five of the eight players were brothers:  Louis, Joe, Julius, Emil, and Oscar Hanson.  The other players were Merril Mclnerny, Pat Larson, Gordon Schaeffer, George Malsed, Willard Falk, Charles Warren,  and goalie Wallace "Moose" Swanson.  The Hanson brothers were born in the United States, but spent part of their youth in the distant Canadian town of Camrose, Alberta before moving to Minneapolis.

After severing connections with profesional hockey, Nick Kahler was selected to coach the players during their trip.  Kahler, assistant manager of the Minneapolis arena, had eight years earlier become the first American ever selected to play for an Olympic team, but financial obligations precluded his participation in the 1920 games.  Kahler's earliest years were spent playing amateur hockey in the Copper Country and in Canada before joining the Duluth Curling Club for the 1914 season.  From there it was on to St. Paul to play with the Athletic Club as manager, coach and player.  In 1916 the Athletic Club, with Moose Goheen, Tony Conroy, Eddie Fitzgerald, and Kahler won the coveted McNaughton Cup against Sault Ste. Marie, Michigan, and then went on to defeat Lachine, Quebec, for the Art Ross Trophy.  He continued with the Athletic Club until 1920.  His first duty as coach was to find three additional players; Olympic requirements stated that a team must have at least 11 players, and Augsburg only had eight.  Si Melby set out to raise the $4,500 his team would need.  First National Bank Vice President J. G. Byam was named treasurer of the Hockey fund, and contributions began to pour in.  Augsburg Professor S. O. Severson donated $2,500, and the South Side Commercial Club of Minneapolis promised to give considerable financial help.  Melby set up a benefit Hockey game at the Minneapolis Arena to raise the rest of the money. The game, set for Saturday, January 21, would feature the Auggies against the Fort Snelling Hockey team.  The Minneapolis Figure Skating Club agreed to put on a show before and after the contest.  Two prominent area speed skaters consented to a race which was to be held between periods of the game.  This tiny college, with but a few hundred students, suddenly shot into the national limelight. Across the country, newspapers carried stories about the Augsburg hockey team and its gifted quintet of brothers.

And then, as quickly as the whole episode started - it ended after the General opted not to field a hockey team.

Only three days before the benefit game was scheduled to be played, William Haddock, who had selected the Augsburg team, received a telegram from the secretary of the Olympic committee.  It read, "Major General MacArthur (chairman of the Olympic committee) instructs me to inform you that the Hockey team recommended is not regarded as a representative team and certification by the American Olympic committee is disapproved." Haddock was outraged, but there was little he could do.  MacArthur termed the Augsburg team “not representative of American hockey” and the committee changed their mind and would not approve the Minneapolis College.  Much lobbying took place to inquire as to; "why the Augsburg team was deemed unfit", including lobbying from former Eveleth Red, Minneapolis Miller, then turned pro with N.Y. Rangers - Ching Johnson, but nothing could be done to send the team, and the players resumed studies.

In the 1928 games, with no US representation, Canada fielded a team of graduate students from the University of Toronto, and completely dominated the 1928 games capturing Gold for the 3rd consecutive Olympics.  This was the only time the United States has not competed in Olympic ice Hockey, as there was no team sent to the 1928 games.