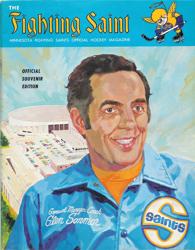 The Minnesota Fighting Saints was the name of two different professional ice hockey teams based in Saint Paul, Minnesota that played in the World Hockey Association. The first team was one of the WHA's original twelve franchises. They played four seasons, beginning in the inaugural 1972-73 season, but folded part way through the 1975-76 season. The team actually had a winning record, 30-25-4, when it ceased operations on February 28, 1976. They played part of their first season at the St. Paul Auditorium before the new St. Paul Civic Center, best remembered for its unique clear plexiglas boards, opened in January 1973. The team colors were royal blue, white and gold. The name was taken from the St. Paul Saints of the Central Hockey League, who had used the nickname "The Fighting Saints" in promotional material.

Particularly during their first few years in the league, the Saints had a policy of favoring local players. In fact, the 1972-73 roster featured no fewer than 11 athletes who were either born in Minnesota or (in the case of former Team USA players Keith Christiansen, George Konik and Carl Wetzel) American citizens. This was almost unheard of in the early 1970s, when few NHL or WHA teams (with the exception of the New England Whalers) had even a single American player.

After the NHL's California Golden Seals moved to Cleveland to become the Cleveland Barons, the WHA's Cleveland Crusaders moved to Saint Paul for the 1976-77 season. Like their predecessors, this second version of the Saints (sometimes called the "New Fighting Saints") had a winning record through their first 42 games (19-18-5), but when owner Nick Mileti was unable to sell the team to local buyers, he elected to fold the franchise on January 20, 1977. The team's logo and uniform design were identical to the first team's, but with scarlet replacing blue in the color scheme.

Among the players the Saints selected in the inaugural WHA draft in 1972 was a man who had played for Team USA at the 1956 Winter Olympics, Wendell Anderson. Anderson said he was flattered, but he chose not to join the Saints and instead stuck to his day job -- as Governor of Minnesota.

Ted Hampson was the Saints' captain in their first four seasons. In the final season, Ron Ward was the team captain, replaced in mid-season by John Arbour.

Games of the original Fighting Saints were heard on WLOL Radio (1330 AM) from 1972 to 1976, with Frank Buetel as play-by-play announcer. Buetel was the original TV voice of the NHL's Minnesota North Stars from 1967 to 1970 on WTCN-TV (now KARE-TV). Buetel's color commentators included Roger Buxton and Bob Halvorson, the Saints' first-season public relations director (1972-73), and Bill Allard (1973-76). No local radio station carried games of the New Fighting Saints (1976-77). Fighting Saints games were televised sporadically on WTCN-TV, with Buetel simulcasting a game in 1974, and Buxton doing subsequent games. In January 1973, CBS aired its first WHA game between the Fighting Saints and Winnipeg Jets live from the new St. Paul Civic Center with Ron Oakes, Gerry Cheevers and Dick Stockton announcing. In the 1973-74 season, one Saints home game was carried on KTCA-TV (PBS).

The main sportswriters who covered the Fighting Saints were Charley Hallman of the St. Paul Pioneer Press-Dispatch and John Gilbert of the Minneapolis Tribune.

The "New" Fighting Saints played their final game on Friday, Jan. 14, 1977, a 9-5 home win over the Indianapolis Racers. 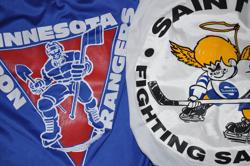 The St. Paul Fighing Saints team name was re-incarnated with the newly formed American Hockey Association (AHA) that featured 5 new minor league ice hockey teams in 1992-93. In addition to the Fighting Saints the teams included were:  Bismarck Bulls, Fargo-Moorhead Express, Green Bay Ice and the Minnesota Iron Rangers in which older 70's Fighting Saints star Mike Antonovich ended his career with 2 games played, and 2 assists notched on the Iron Rangers squad. The league folded in early 1993 resulting in no champion being declared. A number of WCHA Hockey players from the late 1990's and old St. Paul Vulcans players donned the Fighting Saints jersey for that single season in the AHA. The jerseys/logo in 1992-1993 was exactly the same as the late 70's WHA Fighting Saints. The AHA Saints were led by former Gopher Hockey player Grant Bischoff's 36 tallies and 33 helpers for a season ending 69 total points. Former WCHA players Jason Miller, Larry Olimb, Brian Bruininks, and Jim Hau of the Vulcans were a few of the notables that donned the Fighting Saints jersey for the 92-93 AHA season.