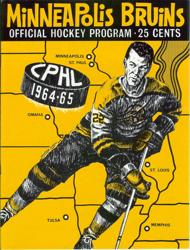 The story of the Minneapolis Bruins beginnings started in the Eastern Professional Hockey League (EPHL) that was a minor professional ice hockey league that operated primarily in Ontario and Quebec from 1959 to 1963.  The NHL had established working relationships with teams in leagues such as the AHL and WHL, but these leagues were not fully under the control of the NHL.  The EPHL was created in 1959 as the first farm league fully run and controlled by the NHL.  While the league proved to be a success on the ice, it largely failed off the ice.  Attendance in these smaller cities could not support professional hockey, which ultimately led to the leagues closure.  By 1962, the EPHL was reduced to just four teams.  One of which was the the Kingston Frontenacs, the Boston Bruins EPHL affiliate.  During its final season the league played an interlocking schedule with the International Hockey League.  Following the demise of the EPHL, the NHL created the new Central Hockey League of minor-pro farm teams in larger, Midwestern U.S. cities.  The Kingston franchise was transferred essentially intact to Minneapolis where it played as the Minneapolis Bruins.  On July 9, 1963, the Boston Bruins of the National Hockey League announced that they had allied themselves with three Minneapolis business and professional men and together would operate Boston's top farm club in Minneapolis beginning in the 1963-64 season.  The Minneapolis Bruins of the Central Hockey League began in the 1963-64 season.  The Bruins were one of the original five teams to enter the newly formed C.P.H.L.  Minneapolis had been without a professional hockey team for 13 years since the Minneapolis Millers were part of the United States Hockey League in 1950. The Minneapolis franchise was operated locally by three dedicated hockey fans: Walter Bush Jr., an attorney with a long association with amateur hockey which includes manager of the 1964 United States Olympic hockey team.  Robert McNulty, a Minneapolis contractor along with executive Gordon Ritz, rounds out the trio. The Bruins played two seasons in the league before being moved to Oklahoma City following the 1964-65 season.  The Minneapolis Bruins played at the Minneapolis Arena.  The Minneapolis Arena was an indoor arena in the "Uptown" area of Minneapolis.  It hosted the various Minneapolis Millers teams from 1925 until 1963 and the Minneapolis Bruins of the Central Hockey League from 1963-1965.  The arena held 5,500 people and was located at 2800 Dupont Ave S near Lake Street.  The University of Minnesota Golden Gophers ice hockey team used the arena as one of their home rinks from the 1920s until 1950.  Ticket prices were a mere $1.50-$2.50 per seat!

If not for the Minneapolis Bruins CPHL team - the Minnesota North Stars likely would have never become a 1967 expansion team in the NHL as then owners Bush, McNulty and Ritz were apart of the original ownership syndicate of business men that too were instrumental in North Stars becoming a reality in Minnesota. 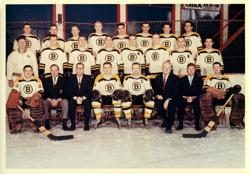