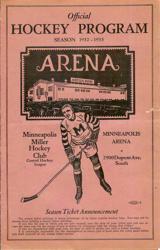 The Minneapolis Millers was the name of various incarnations of minor league ice hockey teams spanning from 1916-1962. The Millers hockey team initially was named after the Minneapolis Millers City Baseball team-- a common practice in the early 1900's to name the hockey teams after the cities baseball teams-- The St. Paul AC's became known as the St. Paul Saints as well in this same manner. In 1915-1916 the Dollar Bay MI native named Nick Kahler whom was a high scoring centerman for the AC's and was the teams serving captain for the AC's first season of 1914-1915, decided to cross to Minneapolis and form a new team (Millers) that consisted mostly of Canadian imports. The Minneapolis Millers played in the same independent league for 1915-1917 as the AC's following the American Amateur Hockey Association's (AAHA) demise because of WWI underway in the spring of 1917. Minneapolis as well as St. Paul AC competed in 1916-1917 with the American Soo, Duluth, Pittsburgh, Sault St. Marie, and Fort William Ontario. Kahler and the Millers following the 1915-1916 season sought entry in the National Hockey Association (The NHA precluded the NHL), as a replacement for the defunct Pittsburgh team, which they were unsuccessful at accomplishing. The Millers had been an early successful team and played several teams from the NHA which was based primarily in the Eastern United States and from Canada. Unfortunately Mill-City team didn't have a home rink to play on, and no league affiliation for their inaugural first two seasons. The Millers squad played a lot of games on the road, and in late 1915 they had a make-shift home on a flooded roller rink at the corners of Plymouth and Washington Ave. After the 1915-1916 season the Millers moved into the new confines of the Hippodrome in St. Paul at the State Fair grounds, and ultimately the team folded after only 2 seasons probably due to no league affiliation, and no home "Minneapolis" rink. Nick Kahler rejoined the St. Paul AC's for the start of the 1918-1919 season after WWI ended.

The Minneapolis Millers wouldn't again have a team until the 1920-1921 season where the former AAHA which resurfaced after WWI for the 1919-1920 season joined the newly formed United States Amateur Hockey Association (USAHA). The USAHA with agreement with the International Skating Union, Canadian Amateur Hockey Association, and the Amateur Athletic Union would recognize it's league winner the "National Champion" The USAHA was recognized as the sole governing body for amateur hockey in the US. In 1920-1921 there were three groups that made up the new association, one in the east and two in the midwest. The USAHA consisted of the Minneapolis Millers, Duluth Hornets, St. Paul AC's, Eveleth Reds, Boston AA, Boston Westminster, Pittsburgh Hornets, Pittsburgh Yellow Jackets, Cleveland, New York, Philadelphia, Calumet, Portage Lake, and both the American and Canadian Soo of Sault St. Marie. Because of little player regulation, and no control of what team players played for Nick Kahler rejoined the Millers again for the 1920-1921 season. For unknown reasons the Millers again folded from 1921-1923.

The Mill-Cty would again resume action for the start of the 1923-1924 season as the newly formed Minneapolis Rockets that replaced a struggling Milwaukee franchise that was a team for a single season in the USAHA with a record of 4-16. The Minneapolis team played their games at the brand new Minneapolis Arena which was located 2800 Dupont Ave. South near the "Uptown" area of Minneapolis. Not only did the arena have artificial ice surface, it had a seating capacity of 5,500. For the 1923-1924 season Minneapolis was blessed with some of it's best talent the team would ever know. Two Winnipeg natives; Ade and Ching Johnson, whom had previously played for the Eveleth Reds, joined the Rockets for the inaugural season, as well as Taffy Abel (who would all see time in the newly formed NHL). Ching at more than 200 lbs. was then considered to be a "giant" and was a crowd favorite not only back in Eveleth, but everywhere around the league. Despite having the Johnson brothers, and Abel, the Rockets wound up in the league cellar with a record of 6-14 in 1923-1924 and 16-22 for the 24-25 contest.  The Rockets name only lasted 2 seasons in the USAHA.

After 5 glorious years the USAHA name also fell apart and the Central Amateur Hockey Association (CAHA/CHA) was developed. Minneapolis was renamed the Millers again for the start of the 1925-26 season. The CHA became known as the "Old Central league" many years later. After the USAHA was disbanded and the CHA was formed the following teams were included: St. Paul AC (their final season before being renamed the St. Paul Saints in 1926), Minneapolis Millers, Duluth Hornets, Eveleth-Hibbing Rangers, Winnipeg, and American Soo. This season the Millers finished on top of the standings with a record of 22-10-6 and a first place championship win over Duluth for a CHA crown. The CHA had been amateur in status, and was an easy target for recruiting by the upstart Eastern professional leagues. The Pioneer press on February 19, 1926 reported: "The growth of professional hockey in the East and the constant threat of raids by that league (NHL) upon the playing talent here have made it necessary for the Central Hockey Association to enter some agreement whereby it can protect itself against the danger of having it's teams disrupted in midseason. The only form the agreement can take is a joining of forces in the professional game." As a result the CHA only lasted that one season. (The "old" CHA in form would regain composure in 1931 and again in 1963 named the "new" CHL, with the Minneapolis Bruins franchise in Minnesota) At this time a few Minneapolis stars opted for the "big money", and the allure of playing in the NHL. Ching Johnson of the Millers joined the New York Rangers where he starred for 11 seasons before returning to the Millers for a final stint from 1938-1940. Ching was joined by Taffy Abel whom played for the AC's from 1922-1925 and the Millers in 1925-1926.

After the CHA disbanded, the American Hockey Association (AHA) was developed which started league play in Dec. 1926, with the newly formed St. Paul Saints (formerly AC's), Duluth Hornets, Minneapolis Millers, and Winnipeg as the founding members. A good core or St. Paul AC's players from the last AC squad in 1924-1925 would sign minor-pro contracts to form the new St. Paul Saints. By 1929 the AHA was booming in popularity, and attendance was strong throughout the league and especially in Minnesota. By 1930-1931 the AHA was developing it's own players at the minor professional level and became a "breeding ground" for future NHL'ers. Since the NHL's "original 6 teams" often raided the AHA talent pool, the AHA and the NHL made an agreement of sorts which ultimately resulted in both leagues respecting one another's contracts.

At this time the "great depression" brought about tougher times for Americans. The Saints and the Millers dropped out of the AHA and became members of the upstart Central Hockey League (CHL) which began as an amateur league in 1931-1932 but switched to professional in (1932-1933). The CHL was comprised mostly of native Minnesotans and consisted of the following teams: Minneapolis Millers, Eveleth Rangers, Virginia Rockets, and the Hibbing Maroons (who became the Hibbing Miners in 1933-1934). Virginia dropped out of the league after the first season and the Duluth Hornets regained league status after being independent prior. The NHL viewed the Central League as a legitimate professional circuit. The Millers won the CHL title in 1931-1932 and again in 1933-1934. For the 1934-1935 season the AHA and the CHL-- whom were both short on teams-- played an interlocking schedule, St. Paul faced the Millers for what turned out to be the last ever CHL title with St. Paul winning.

Starting in 1935-1936 things went to well with the interlocking schedule, St. Paul and Minneapolis would rejoin what is considered the "new" AHA where they would continue operation as the Millers until 1942. For the 1936-1937 contest Nick Kahler, former AC and Miller, re-emerged as the owner and promoter of the team. The "Mill-City stars" went onto win a league title this same season sweeping St. Louis in 3 straight games.  By 1941 the US was at the threat of war that was quickly becoming a reality which WWII started. After 16 seasons of solid league play the AHA folded.

By the mid 1940's when WWII was over countless people were eager to see the return of pro hockey in Minnesota. In 1945-1946 the AHA resumed league play as the new United States Hockey League (USHL) with the following teams: Minneapolis Millers, St. Paul Saints, Kansas City, Omaha Knights, Tulsa Oilers, Fort Worth Rangers, and the Dallas Texans. The USHL in Minnesota was very popular and lasted in Minnesota until 1951 when the St. Paul Saints left the league (The USHL would re-emerge in Minnesota years later known as the St. Paul Vulcans). The Millers dropped out of the league in 1950 and would join the AAHL for one season in 1951-1952 before re-joining the "on-again/off-again" professional circuit in the CHL for one season in 1957-1958.

The final installment to close the record book on the "new" Minneapolis Millers came when the International Hockey League (IHL) was formed in 1959.  Late in the inaugural season of 1959 the struggling Denver Mavericks moved to the Twin Cities and became the Millers. The IHL "new" Millers had many good seasons while posting great team records, and losing in the IHL Championship series on 2 occasions in 1959-1960 to St. Paul, and again in 1961-1962 to Fort Wayne. The Millers and Saints final season in the IHL was in 1961-1962. The IHL would return some years later as the Minnesota Moose in 1994. 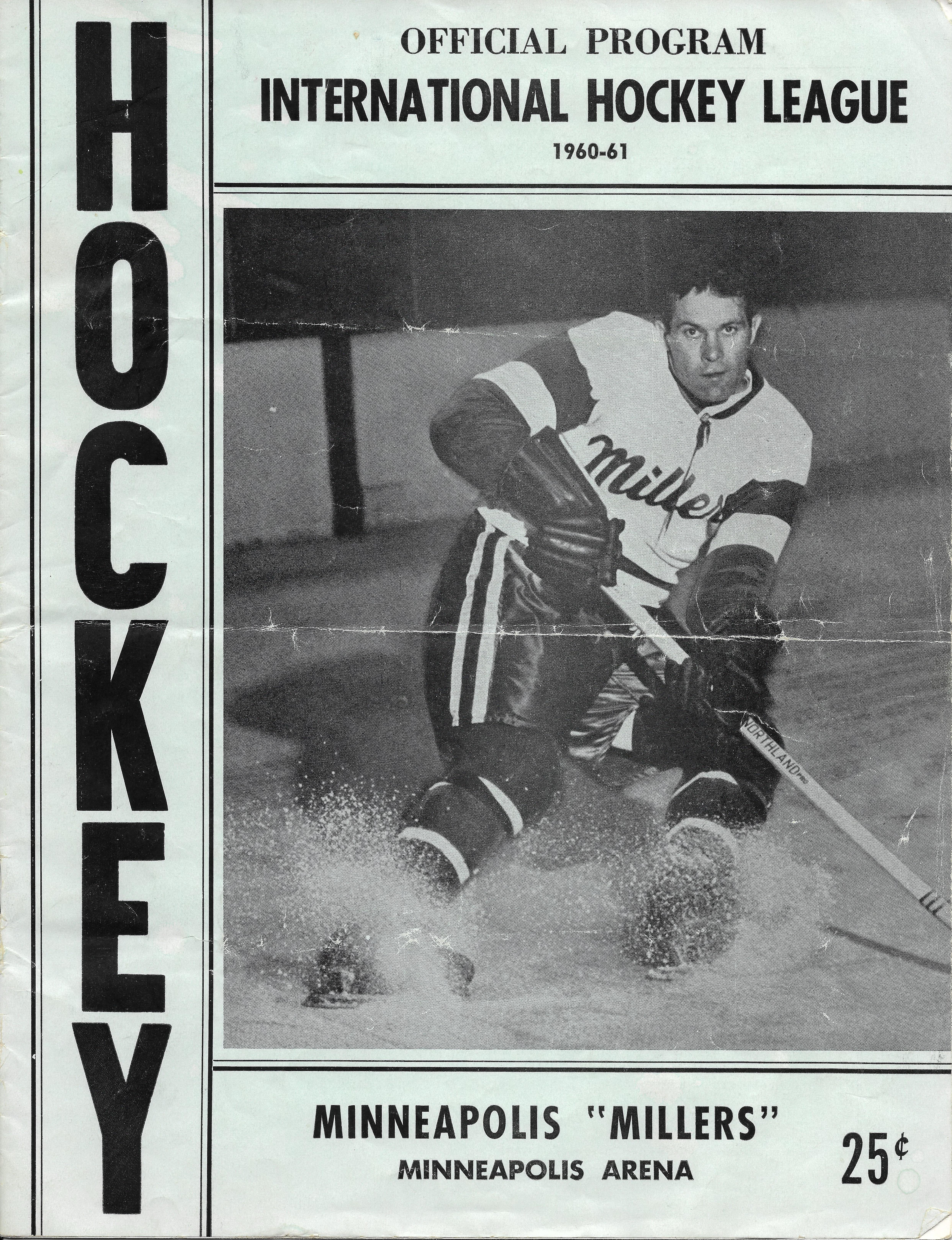