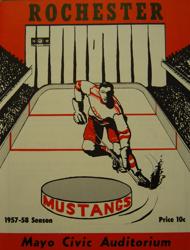 The Rochester Mustangs were a team rich in tradition and played in one form or another in Rochester for over 62 years.  The Mustangs got their start in the 1940's as a senior team in the old AAHL. They played on such a short sheet of ice at Rochester's old Mayo Civic Auditorium that the blue lines almost overlapped. They also played in the USHL, which was a senior semi-pro league back then from 1961-1970. Lou Nanne, who went on to play, coach and be general manager of the Minnesota North Stars, played for the old Mustangs. So did Herb Brooks, who coached the U.S. Olympic hockey team to gold medal in the 1980 Winter Olympics. Others who played for the old Mustangs include Bob Fleming, past president of the U.S. Olympic hockey committee; Ken Johannson, onetime U.S. Olympic hockey general manager; and U.S. Olympians Bill Reichert and Gene Campbell.

The senior Mustangs ceased operations in the early 1970's, but in 1985, the Mustangs emerged again in Rochester, this time as a junior 'A' team playing again in the USHL, which had since become a junior league. The "new" Rochester Mustangs, was the combined product of two great hockey traditions in Southern Minnesota - the 'Old' Rochester Mustangs and the Austin Mavericks. The 'new' Mustangs had played in nearby Austin, Minnesota as the Mavericks, for 11 years and were moved to Rochester in 1985.

The southern MWJHL-USHL team started as the Austin Mavericks in 1974 as part of the Midwest Junior Hockey League under the ownership of Dr. Joe Janes. The Austin club was part of the 1977 merger of the United States Hockey League to the MWJHL. The Minnesota Jr. Stars- whom later became the St. Paul Vulcans were another Minnesota team along with the 1977 merger. The Austin Mavericks enjoyed hockey success in Southern Minnesota from 1974 to 1985. The Mavericks team moved the franchise to Rochester and changed their name back to the Rochester Mustangs, "It was only fitting we call them the Mustangs," said Janes, one of those responsible for the team's move to Rochester. In their first six years in Rochester, the "new" Mustangs won three National Junior 'A' championships. In 1986-87, the Mustangs were one of the few teams in the league that could claim a "triple crown title" when the Mustangs won the Anderson Cup as USHL regular season champions , the Gold Cup as playoff champs, and in addition taking the national crown under coach Frank Serratore, former coach whom later became G.M. of the "new" Minnesota Moose franchise the Manitoba Moose. Kevin Constantine, former head coach of the San Jose Sharks and Pittsburgh Penguins, also coached the Mustangs to a National Junior 'A' title in the 1997-88 season.

New York businessman Dan Nasshorn and his group purchased the team before the 1994-95 season and one of the first things they did was to hire former Omaha Lancers' assistant Doc DelCastillo as the new head coach for the Mustangs. With his tough-guy, no-nonsense approach, the 28-year old DelCastillo led the Mustangs back to prominence in 1995-96. The team finished above .500 (24-21-1) for the first time in years. It also advanced to the USHL playoff finals and took the Green Bay Gamblers to a seventh game before the series was decided. Then they went on to the national tournament where they lost in the semi-finals. "This is what the Mustangs are all about," DelCastillo said of the 1995-96 team's surge back to the top. "This franchise has such a tradition of winning."

Joe Janes, Jim Weber, and Dan Nasshorn were all pioneers from different era's but both shared a common goal of promoting hockey in Southern Minnesota and creating fast paced, exciting, local entertainment for the citizens of their communities. Through their programs, hundreds of hockey players developed, matured, made a living, and grew with hockey in southern Minnesota. "Many citizens of the southern Minnesota communities owe both these men a dept of gratitude for exposing them to future professionals, United States college players, and United States Olympic and national stars of tomorrow." Rochester is now among the defunct USHL teams following the 2002-2003 season where they ceased operations

It was in Mustangs tradition to place numerous players in Division I and III colleges, as well as the professional ranks. "We are proud to say that we have placed over 200+ players in collegiate hockey programs, not to mention 50 some players who are playing at the professional level, the most famous being Shjon Podein"

The Rochester Mustangs played all of their home games in the Rochester Recreation Center from 1975-2002, with a seating capacity of well over 2,500 spectators. 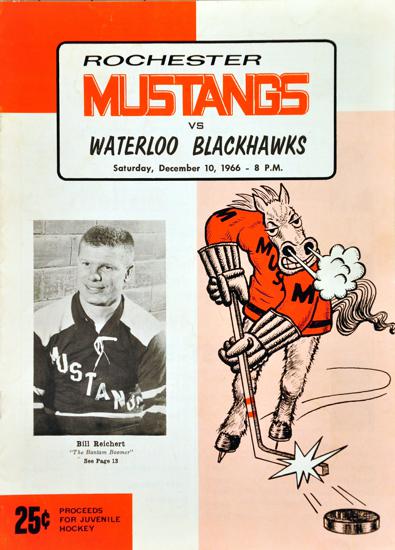