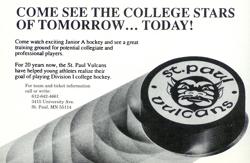 The St. Paul Vulcans/Twin Cities Vulcans were a minor hockey team in Minnesota for 27 seasons from 1973-2000. The story of the Vulcans starts back in the fall of 1967 when a group of local hockey leaders observed a gap in the progression of competitive hockey alternatives for those Minnesota hockey players who did not move onto College hockey. These players didn't have a viable option to sharpen their skills for future advancement to the collegiate level and beyond. The Minnesota-Ontario league or the Canadian American Hockey League (Can-Am for short) was formed to fill this development gap. The St. Paul team was named the Win Stephens Buick (1968-70), who later became the Minnesota Junior Stars (1970-1973). This league eventually evolved into the Midwest Junior Hockey League (MJHL) in late 1972 after the Can-Am league ceased operations.

The MJHL started league play with 6 new teams in 1973, one of which was the newly formed St. Paul Vulcans whom evolved from the Junior Stars Can-Am team. (The Vulcans team name originates from the St. Paul Winter Carnival's Vulcan Krew). In 1977-78 the MJHL was losing ground and merged with the senior United States Hockey League (USHL). By 1979 the USHL composed entirely on Junior players.

The MJHL initially got off to a good start, the level of play and competition was fierce, and the fans began to file into the stands to see what this new MJHL was all about. Scouts from the WHA and the NHL frequently made visits, and college recruiters were bypassing the long trek to Canada to check out the new league as well. Opposition to this new "Junior Hockey" in Minnesota surfaced from High School coaches, and smaller senior college hockey teams, since they all found themselves "fighting" to get players, and have teams themselves. Herb Brooks whom was coach at the U of M during the leagues inception was basking in their own minor-league feeder system. No longer did big colleges-- such as the U of M-- have to gamble on a scholarship with a young unproven High Schooler with little competitive play. Now they could send a player to the juniors for a year to get a little "seasoning" and then reevaluate the players progress. (Brooks himself would have some 15 former Vulcans alone on his 3 NCAA National Championship Gophers Hockey teams from the 1970's). This is how the Vulcans became to be known as the "Gophers Hockey farm team, or JV squad" by some hockey insiders during the Vulcans 27 seasons in Minnesota.

The St. Paul Vulcans captured the coveted Don Clark Cup in the MJHL inagural season of 1973-74. The Vulcans again repeated in 1975-1976 as league Champions and again in 1977-78 to capture the MJHL title and the Anderson Cup under Doug Woog's leadership. Doug Woog recalls after his last season with the Vulcans in 1978; "those were the days, it was a great time for hockey in Minnesota, and really a wild ride. I can remember all the ups and downs we went through to get that whole thing going, and I was excited to really be a part of it all." Coach Woog left to assume responsibilities as the new South St. Paul high school head boys hockey coach.

Following the MJHL's 1978 season the league was struggling financially. Desperate to keep afloat they realized they had to do something drastic. That's when the United States Hockey League (USHL) came calling. The USHL had been a men's senior league until that point and was also having financial troubles of their own, and proposed a merger. The MJHL agreed and then became the "junior" USHL in 1977-1978 which also featured 6 teams. By the 1979 season the league was entirely "junior", as initially their had been some cross-over between the junior and semi-junior teams. In 1982 Vulcans star Phil Housley was drafted by the Buffalo Sabres as the No. 6 overall pick of the first round. In 1982 the Vulcans were also sold to Stanley Hubbard, owner of Hubbard's broadcasting (KSTP-TV). The final dance for the St. Paul Vulcans came in the 1990-91 season where the Vulcans won yet another National Championship in the USHL. In 1995 the St. Paul Vulcans were renamed the Twin Cities Vulcans in hopes of broadening the fan base to cover the entire Minneapolis and St Paul area. Sadly, in the summer of 1999 the Vulcans announced a departure from the Twin Cities to a "hidden hockey hot bed" in Kearney Nebraska to become the Tri-City Storm, whom continues to oparate and develop players in the USHL today. The USHL today is governed by USA Hockey and is the #1 Junior A Hockey league in the country, and is also the #1 feeder program to the country's Division 1 colleges around the country, just as Herb Brooks once did with the Vulcans players in earlier years in Minnesota.

The St. Paul Vulcans 27 years in Minnesota were tenuous in the way of fan base that ultimately led to the teams departure to Nebraska. Throughout their years of operations in Minnesota the USHL and the Vulcans remained constant and dedicated to providing opportunities to Minnesota players aspiring to attain greater heights in the hockey world. The Vulcans played their home games at Mariucci arena on the U of M Campus,Wakota Arena in South St. Paul, Augsburg Arena in Minneapolis, Columbia Arena in Fridley, and finally at the Bloomington Ice Gardens in the teams final season of play in Minnesota.

The lack of media coverage was a significant factor that led to the demise of the St. Paul Vulcans USHL franchise. When the Twin Cities Vulcans moved to Kearney, Neb. to become the now popular Tri-City StormFranchise in the 2000-01 season, it marked the third departure of a major hockey team from the Twin Cities following the North Stars, and Minnesota Moose.

The attendance prospects for the Vulcans went from bleak to, non-existent. The Vulcans always struggled at the box office, averaging less than 500 fans for an entire season.Vulcans tickets, on the other hand, were an affordable $6. Not only would the price seem to appeal to a large market, but the Vulcans, for their past two seasons in Minnesota, were the only team in the Twin Cities to sell beer at their games at the time.

The Twin Cities media also did an excellent job of ignoring the existence of the Vulcans and the USHL. When the announcement came that the Vulcans were leaving town following the 1999-2000 season, one local daily paper buried the story so deep in the sports section, while the other paper gave it just a passing mention in a briefs column.

The reaction of most Twin Cities residents was not sympathy or surprise that the Vulcans were leaving. Rather, the reaction was generally "The Vulcans are still in town?" Perhaps the Twin Cities media should be included in this category, as they did not notice for years that there was a USHL team in town.