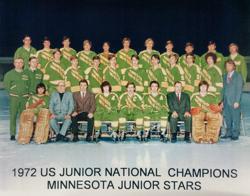 The Origin's of todays United States Hockey League (USHL) can be traced back to the early 1970s and the launch of what was known as the Midwest Junior Hockey League. The MJHL featured teams in Chicago, Fargo-Moorhead, Minneapolis, St. Cloud, St. Paul and Thunder Bay when it opened for business in 1973. In its original form, the league’s existence was brief but successful. The 1976–77 season was to be the MJHL’s last, concluding a four-season span that produced 20 NHL draft selections.

Despite its rapid success, the league’s strength dwindled a bit both on the ice and off, leading to the circuit’s closure following the 1976–77 season. Without a league, three MJHL teams pondered the future in the summer of 1977. Eventually the clubs contacted the minor-pro United States Hockey League, a circuit that had fallen on hard times after a successful run that began in the 1940s.  A unique merger was formed, with the three junior teams (Bloomington Junior Stars, Austin Mavericks, St. Paul Vulcans) and three remaining pro teams (Sioux City Musketeers, Waterloo Black Hawks, Green Bay Bobcats) gathered under the USHL banner. League governors decided on a two-division format, with the junior-aged teams in the Midwest Division and the professionals in the U.S. Division. The teams played an interlocking schedule that was, predictably, dominated by the professionals. But the arrangement still proved beneficial for the juniors, as several parlayed the experience into NCAA Division I scholarship offers and, later, professional hockey careers. 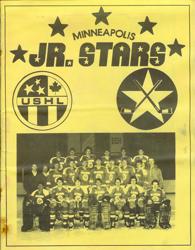 The USHL’s split existence would last just two seasons. The minor-pro wing of the league folded following the 1978–79 season, providing junior hockey operators with the opportunity to redefine the circuit. The 1979–80 season was the league’s first as an entirely junior arrangement, signaling the dawn of what has become America’s top junior hockey league. Opening as a seven-team circuit, the USHL’s first seasonas an entirely junior-aged league featured three teams in the Minnesota hockey hotbed of Minneapolis-St. Paul and a fourth just over an hour away in Austin. The USHL was a cozy contingent to say the least. The Hennepin Nordiques claimed the league’s first Anderson Cup championship, outdistancing the second place Bloomington Junior Stars by a slim two-point margin...