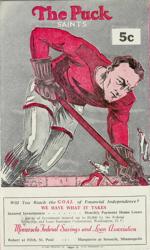 The St. Paul Saints  was the name of various incarnations of minor-pro league ice hockey teams spanning from 1925-1963 in various leagues.  The St. Paul Saints inaugural season of 1925 came after the St. Paul AC's hockey team and the Central Hockey Associaton (CHA) league fell apart after the 1924-1925 season.  The Pioneer press on February 19, 1926 reported: "The growth of professional hockey in the East and the constant threat of raids by that league (NHL) upon the playing talent here have made it necessary for the Central Hockey Association to enter some agreement wherby it can protect itself against the danger of having it's teams disrupted in midseason.  The only form the agreement can take is a joining of forces in the professional game."

This new "professional game", as reported by the Pioneer Press, was the start of the American Hockey Association (AHA) which started league play in Dec. 1926, with the newly formed St. Paul Saints, Duluth Hornets, Minneapolis Millers, and Winnipeg as the founding members.  A good core or St. Paul AC's players from the last AC squad in 1924-1925 would sign minor-pro contracts, including Notable AC's Tony and George Conroy, and legendary Frank "Moose" Goheen from (1925-1930).  The newly formed professional team was called the Saints since the AC's team was nicknamed the "Saints" for years (named after the Saints city baseball team from the early 1900's, just as the Minneapolis team the "Millers" were also named after the city baseball team.)  The Saints continued in the AHA for most years until 1930 and again after league play was ceased due to WWII in 1942. Another St. Paul "Saints" team from the first amateur, then professional Central Hockey League (CHL) from 1931-1935 enjoyed early success when they won a CHL title and played various "made-up" championship games calling themselves the midwestern professional hockey champions when the team defeated a previous AHA league Champion the "Flyers". The CHL folded league play for unknown reasons after the 1935 season and the Saints regained league play in the AHA that they had dropped out of back in 1930, but only until 1942 when the AHA was resurrected after WWII as the United States Hockey League (USHL).  The "Saints" would win the USHL title in 1948-1949.  The USHL would also fold after the 1950-1951 season for unknown reasons and St. Paul wouldn't see professional hockey again until the International Hockey League came to St. Paul in 1959. The "new" IHL Saints would win back-to-back titles from 1959-1960 and again in 1960 1961, before moving over to the Central Professional Hockey League (CPHL/CHL) in 1963-1964 and being renamed the St. Paul Rangers. The Rangers would be crowned the Champions in the CPHL in 1964-1965.