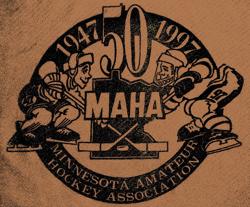 The first group to form a statewide association to promote hockey was the Minnesota Hockey Association, organized at Hibbing on February 11, 1926, by representatives from the state's largest city recreation departments.  Representatives from St. Paul, Minneapolis, Duluth, Hibbing and other Mesabi Range communities attended the organizational meeting.  The following officers were elected:

Both Johnson and Fox had extensive experience in the promotional and administration of amateur sports in their respective communities of St. Paul and Minneapolis.  Johnson was Secretary-Treasurer of the successful Minnesota Amateur Baseball Association, the largest in the country.

The primary purpose of the newly formed organization was to conduct a statewide Senior (adult) tournament.  Results of the first tournament held in February 19-20, 1926 at Hibbing were: 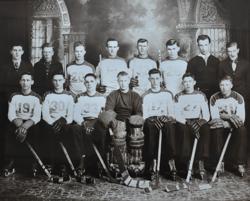 The Minnesota Hockey Association continued to stage Senior state tournaments until their early 1930’s. However, outside of holding yearly state tournaments, the association did little to promote the youth game or the sport in general, or extend the growth in popularity of the game in those areas of the state where the game was not being played. During the mid-and late 1920’s, due to the encroachment of professional hockey into their territory, the once strong United States Amateur Hockey Association degenerated into a weakly functioning national body.  With the 1932 Winter Olympic Games scheduled to be held in the United States, the United States Olympic Committee induced the Amateur Athletic Union to take charge of amateur hockey in the nation in order to insure the United States a strong entry in the Winter Olympic Games.  Consequently, the local district AAU governing bodies in the various hockey areas of the country, such as New England, New York, Michigan and Minnesota, became involved in the game.

In 1930, the Minnesota District AAU started operating a Minnesota-Northwest Tournament for Senior teams at the Minneapolis Arena under the direction of William H. Fox. These tournaments ran continuously through with the 1940s season.  As in the case of the aforementioned MHA, the AAU failed to promote hockey in the state or the country, except to conduct state/district Senior tournaments.

What the sport of hockey needed was a statewide organization that, in addition to conducting tournaments, would encourage, promote and improve the standard of hockey at all age levels in the state.  Such an organization materialized when Robert B. Ridder of St. Paul, a radio executive, called a meeting in the fall of 1947 to form such a group. Ridder, who grew up in the New York city area, became interested in hockey while attending the New York Ranger games at Madison Square Garden.  Later, during the early 1940’s, he became associated with the Herald team, which was a member of the Duluth Industrial Hockey League. Being in the radio and newspaper business, Ridder was well-suited to the task of forming a statewide amateur hockey association.

The organization meeting was held in December in St. Paul and, thus, it became the first state association to join the Amateur Hockey Association of the United States. At the meeting held in New York City on October 29, 1937, the AHAUS had been formed with 14 teams from the following leagues: Eastern Amateur, New York Metropolitan, Michigan-Ontario and the International (Ontario-Minnesota).  In February of 1947, the AHAUS was elected to membership in the International Ice Hockey Federation. Eventually, they'll organization became the governing body of amateur hockey in the United States.

At the first meeting of MAHA, most of the Senior leagues in the states were represented, and each group enthusiastically endorsed the AHAUS program and the idea of forming a statewide organization which would affiliate with the national AHAUS body.  The following officers were elected:

Accredited delegates who attended the meeting were:

The main activity of MAHA during its first year of operation was to conduct a state Senior tournament, the winner of which would represent the state at the AHAUS National tournament.  Minnesota Senior leagues were classified as Open, Class A and Class B. Seven teams, one from each league in the state, qualified and met at the Saint Paul Auditorium on March 7 and 10, 1948.  Grand Forks of the States-Dominion League was crowned in Class A champion, while North Mankato of the Southern Minnesota League won the Class B title. 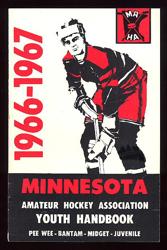 “To encourage and improve the standard of ice hockey in the Minnesota area; to conduct ice hockey tournaments and to select representative teams to participate in tournaments; to associate with other ice hockey associations; to do any and all acts necessary and desirable in the furtherance and the foregoing purposes; to buy, sell, lease and otherwise deal in all kinds of property, real, personal and mixed, for the purpose of creating further interest in amateur hockey.”

MAHA, using the Minnesota Amateur Baseball Association's handbook as a guideline, drew up and printed a handbook containing the association's constitution, by-laws and activities.  This was the first such state hockey Association handbook published in the country.

Being part of the AHAUS proved to be a distinct advantage to be affiliated member state/district associations.  Listed below are some of the activities of the AHAUS:

For the initial season of 1947-48, only 47 teams, all in the Senior class, registered with MAHA and the AHAUS.  The number represented about 10 percent of the total number of teams playing in the state at that time. Nationwide, the AHAUS registered a meager 131 teams for the 1947-48 season. World War II has drastically reduced the number of Senior and youth teams playing in Minnesota compared to those that function during the mid-and late 1930’s. For example, during the 1935-36 season, Minneapolis registered 435 teams, the largest number in the nation and not far behind the numbers that the largest cities in Canada registered.  In addition to Minneapolis, Duluth, St. Paul and the Iron Range cities, numerous Senior, Intermediate and youth aged teams existed in northwestern, central and southern Minnesota.

In 1951, Don Clark, MAHA Secretary-Treasurer and Registar, stated “Inducing teams in the state to register proved to be a difficult task, even though the registration fee was a modest amount.” This trend continued on for many years and it was not until about 1973-74 season that 2,000 teams registered, a number that represented about two-thirds of the total teams in Minnesota. Within a few years, MAHA became involved in staging coaching and referee clinics and distributing coaching manuals, other helpful printed matter and player awards.  Later, an insurance program for the players was instituted.

In addition to the Senior and Pee Wee class tournaments, the next category to be formed a was Juvenile, which was restricted to players 18 years of age and under.  This class was adopted in 1956 and the initial tournament held at Duluth was won by St. Paul Arlington, who defeated Mountain Iron in the finals of the four team event. Presently, this class corresponds to Junior Gold, which nomenclature was selected in 1984.

For the season of 1960-61, Minnesota adopted the classes and nomenclature that the AHAUS, the national governing body, has decided to employ.  The system, which had been borrowed from Canada, included Junior, Juvenile, Midget, Bantam, Pee Wee and Squirt classes. In 1961, the agent for the Minnesota Pee Wee class was lowered one year and the name of the class changed to Bantam.

Duluth Lower Chester defeated Owatonna in the finals of MAHA’s first state Midget tournament, held a Duluth in 1961.  In 1966, Grand Rapids hosted the first state Pee Wee tournament while the initial Junior B Championship was staged at Polar Arena in North St. Paul in 1974.

In the 1970’s, girls’ teams started to be organized in the state.  In 1974, the first state tournaments in the Pee Wee and Bantam class were held with White Bear Lake capturing the Pee Wee title and Mounds View the Bantam crown. Lucille Korsman of Farmington, Bob May of Wayzata and Keith Howard of Coon Rapids were the MAHA leaders in the early development of girls’ hockey in Minnesota.

Walter Bush and Bob Fleming, both of whom became involved in MAHA hockey in the 1950’s, have remained active in the sport on a national scale.  Bush has been president of USA hockey (AHAUS) since 1986, while Fleming has been a director and has chaired the United States Olympic Ice Hockey Committee for many years. Peter Lindberg has been a USA hockey Vice President since 1988.  Bob Ridder was manager of the 1952 and 1956 U.S. Olympic teams.  Both teams won silver medals.