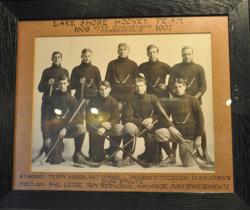 In 1901 the only maintained ice skating rink in Minneapolis, with warming house and lights was at Central Park, now called Loring Park and was for pleasure skating only, however there was skating on the river, lakes and the old Dupont swamp as long as there was no snow.  On Lake Calhoun there was good skating most all winter, new ice nearly every day where the Cedar Lake Ice Company, had cut ice the previous day, no warming house or lights and a cake of ice to sit on while putting on your skates.  Minneapolis' first hockey team the Lake Shores was formed in 1901.  This team was composed of the following: Parsons Cross, Bill White, Leon Rooks, Henry Woerner, Harry Hodges, Ralph Baird, Frank Finnigan, Roy Hodge, Percy Paige and myself Cleve Bennewitz. We played on this rink until 1906, usually very cold, no banking boards or goal posts, a pair of over shoes or a couple chunks of ice served as goals.

In 1906 I put up the first banking board rink in Minneapolis, with cedar posts froze in the ice for goals on the east side of Lake of the Isles at 26th Street, with no warming house or lights.  Below is the statement and receipt for the lumber used in this rink for the stupendous price of $24.19.

At this same time we outfitted our hockey team the Lake Shores with uniforms, the first hockey team in Minneapolis with uniforms.  Ten uniforms in all consisting of sweaters, stocking caps, socks and monograms for the price of $49.00, as the following statement and receipt shows (below).

In the fall of 1906 the Lake Shores put up a hockey rink at the corner of Lake and Hennepin Ave., where the Rainbow Cafe is now located.  The rink had a four foot fence and banking boards around a lighted playing surface, also a players warming house and a 18x24 ft. heated glass warming house for spectators.  This was all enclosed with an eight foot fence.

It took the team the better part of three months to construct this rink, working Saturday's, Sunday's and evenings. The Lake Shores in order to finance this rink put ice cream socials in a three center pole tent at 28th and Hennepin Ave., where West High School is now located, sleigh ride parties and dance at the old Richfield town hall, roller skating parties and dances in the old Nicollet Roller Rink and Lake Street and Nicollet, admission tickets of 4 games for 50¢ to our hockey games.

In 1905-1906-1907 we used every gimmick that we could think of to finance our team and rink, also monies from the team members.  The newspaper gave us little or no support at this time as hockey was unheard of in Minneapolis. [Our team] Put up posters from Hennepin and Lake Street to Cedar Avenue.

The only hockey team news we could get was at the Christian Science reading room located at 1427 West Lake Street, across Lake Street from our rink.  The Science Monitor contained scores of all games played in Canada and U.S.A. at that time.  In 1902 there were town hockey teams in St. Paul - the Gotzian Victorias sponsored by Gotzian Shoe Company, and was composed of Fred Cook, O.W. Oehma, Bergstrom, Barron, Jack Taylor, Mat Taylor, Ray Armstrong, Harry Clayton, Bert Clayton and O'Brien.  This team was one of the best in the U.S.A. at the time.  The St. Paul Virginia hockey team [was] composed of: Newtwon, Teasdale, Paterson, Shepard, Routh, Warner, Bass, MacDonald and Clark.  These two teams played all of the their games on the Virginia rink located at Laurel and Virginia Avenue in St. Paul.  This rink was a pleasure skating rink, which was lighted and had one foot banking boards.  In 1902 the only competition [that] Minneapolis' first hockey team had was these two St. Paul teams, all games played at their rink in St. Paul.

In 1903 a hockey team was formed at what was called Cottage City at Lake Harriet, the second team in Minneapolis and was composed of: Leo Fontaine, Kern Fountaine, Carl Struck, Jerry Struck, Paul Struck, Carl Gage, Dick Gage, Frank Gage, Frank Berry, Harry Hoyt, Sam Hoyt, Earl Farnsworth, Malcolm Keyes and Vic Brooder called the Harriet's.  In 1906 this team had the only rink in Minneapolis, that was lighted and had one foot banking boards, no warming house.  The lights on this rink of which there were ten old time Minneapolis gasoline street lamps mounted on cedar posts froze into the ice.  This lighting was very poor but made it possible to play by [night], but if the ice was clean and very dark or zero or below the puck was often lost right in the playing surface.  We often painted the edge of the puck white which made it easier to see on a black playing surface. 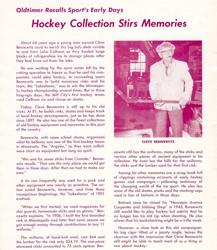 Cleve Bennewitz feature about past in 1970's UofM Program

In 1904 a third hockey team was formed in Minneapolis, at the old King Farm slough at 38th and Bryant Ave. South.  This team was called the Wanderers and was composed of: Sjoberg, Sinclair, Swartz, A. Swanson, O. Swanson, A. Swanson, George Labatt, C. Dickinson and Bobby Marshall, the old University of Minnesota football star.  In 1905 the Wanders got permission to flood part of the old Nicollet baseball park in front of the grand stand.  It was poorly lighted with a few 100 candle power electric lights.

From 1905-1908 most all Minneapolis teams played at Lake Shore Rink at Lake and Hennepin.  From 1908-1910 the M.A.H.A. rink at Lake Street and Girard Ave. South, and [from] 1910-1912 at the Athletic and Boat Club at 29th Street and Irving Ave. South where the mall is.  These rinks were all open air, fenced in with banking boards, lights and warming houses.

In 1906 a hockey team was formed at the Minneapolis Y.M.C.A. also a Minneapolis City Hockey League composed of the Lake Shores, Harriets, Wanderers and Y.M.C.A., all games were played on the Lake Shores open air lighted rink at Lake Street and Hennepin Ave.  There were also more teams founded in St. Paul; The Phoenix, Mic Macs & Boat Club.  A few inter city games were played that year.

In 1908 the Lake Shores moved this rink to Lake Street and Girard Ave. South and called the rink the Minneapolis Amateur Hockey Association and played games there under the names of Lake Shores and M.A.H.A. This rink was open air with a 8 ft. fence, using an old 16x24 ft. spectators warming house for team dressing rooms.  Our old 12x12 dressing room for storage of shovels, brooms and rink equipment,  we built a spectators warming house 16x60 ft. on one side of [the] playing surface and rink with all glass front facing [the] playing surface and protected with chicked wire.  This warming house was equipped with 40 ft. of bleacher seats for spectators and heated with 4 wood stoves. The other 16x20 ft. was for our band which consisted of business men on the corner of Lake and Hennepin and some of the neighborhood boys led by Thomas Griffith.

By this time several new teams were formed in St. Paul, the Phoenix, whose rink was at Chatsworth and Grand Ave. The Laurels rink was at Ashland and Oxford, [and] St. Paul Boat Club's rink [was located] at Selby and Mackubin. The Chinooks and Lafayettes played their games at one of the foregoing rinks, which were open air, fenced in, lighted and with warming houses.  In 1908 the first Twin City League was formed comprising the above teams of St. Paul and the Lake Shores, Harriets, Wanderers and Y.M.C.A. or Minneapolis. These 3 teams played at the only lighted rinks in Minneapolis - the M.A.H.A. rink at Lake Street and Girard Avenue S.

In 1907 I induced the Park Board to put up a warming house and maintain the first Park Board skating rink in Minneapolis at the foot of 28th Street and Lake of the Isles Blvd., no lights and one ft. banking boards for hockey.  In the following years Park Board rinks sprang up all around Minneapolis Parks, many with lighted hockey rinks. 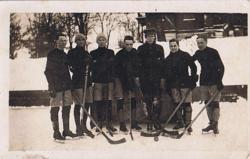 Source: All of these original 1901-1908 manuscripts as shown, are part of Cleve "Bennie" Bennewitz archives donated to USHHoF in Eveleth.

This is what original hockey history manuscripts look like, and what is typed above 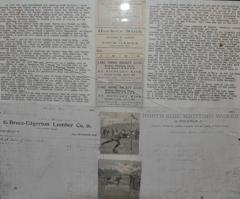 Receipts from part of story discussing "lumber and jerseys purchased"