The American Hockey Association, the first professional league in the Midwest, was organized during the fall of 1926.  William Grant was selected president of the league- a position he held for fourteen years.

St. Paul, Minneapolis, Duluth, Winnipeg and Chicago formed the association's membership for the initial season of 1926-27.  The Chicago Shamrocks were the second professional team in the Windy City sharing the market with the NHL Blackhawks.  At one time or another fifteen different cities held franchises in the league.  After the 1941-42 season the AHA disbanded due to World War II.  After the war the league reorganized as the United States Hockey League for the season of 1945-46.

Minneapolis Millers won the playoffs in 1928, and in 1937, led by Phil Hergesheimer, George Patterson and Bob Blake. In 1940 St. Paul under the tutelage of Perk Galbraith, former Eveleth and Boston Bruins star, captured their only playoff title in the history of the AHA.  Oscar Hanson, one of the three Hanson brothers from Minneapolis who played in the AHA, won three league scoring titles in the association's sixteen year history. During the 1938-39 season, Hanson scored 89 points in a 48 game schedule to set a long time standing season scoring record for all of professional hockey. Hanson, who during his career played with three different AHA teams, was a member of the Minneapolis team during the 1938-39 season. 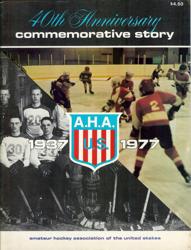 George Higgins, Minneapolis radio announcer and sports official, took over as league president for the 1940-41 season.  In the spring of 1941, under Higgen’s direction the league introduced a successful All-Star game which drew 9,000 fans at St. Louis