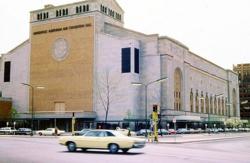 The formidable Minneapolis Auditorium once stood at 1301 2nd Ave. S. (front doors faced 3rd Ave. S) and was finished for opening ceremonies June 4, 1927 in downtown Minneapolis.  The palatial building lasted for 62 years from 1927-1989.  The first Auditorium incarnation actually was just a few blocks away on 11th St. and Nicollet Avenue that opened in 1905, (that space was rebuilt and renamed the Lyceum Theater in 1924, and was eventually demolished in the 1970's to make way for Orchestra Hall).

The Auditorium-Arena had a seating capacity of 5,687 on its balcony, 4,160 on its floor, and 698 on the stage, for a total of 10,545, and seating for roughly 6,800 fans with ice in.  The auditorium took two years to construct, at a cost of $3 million, covered an area of 230 by 540 feet (approximately two city blocks), had a stage 50 x 186 feet in area, and 80 foot tall ceiling.  Curiously the exterior of the arena area had a peaked pointed roof, but the interior appearance of auditorium ceiling was sloped adding to the arena character.  Construction of the building took 3.25 million bricks, 15,000 yards of concrete, and 5,000 tons of steel.  The venue was also a popular concert location and hosted some of the biggest names in the music industry including: Tony Bennett, Aretha Franklin, Simon and Garfunkel, Jimi Hendrix Experience & The Doors. 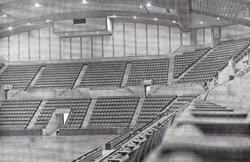 In the summer of 1966, the City of Minneapolis invested $16.3 Million in facility upgrades in all of the 3 areas of the combined building.  The Auditorium-Arena underwent the most drastic '66 renovations with a new raised floor some 12+ feet, and an artificial ice plant was added to the building making way for hockey and figure skating on fresh ice sheet measuring at 196 x 88 feet.  The Auditorium-Arena upgrades were completed for the formal re-dedication held March 11, 1967 - but the first event held was March 3-5th for the State Catholic High School Basketball Tournament.  Minneapolis City officials felt the need to add an ice plant to the building, as the old dilapidated Minneapolis Arena was demolished 1 year prior - leaving the growing Minneapolis City Hockey League, and ever popular Ice Follies with few local options including: Williams Arena, Golden Valley Ice Center, Braemar, Aldrich and Wakota.  Ironically, as newspaper accounts recite; City officials had just begun talking of placing a sheet of ice in the Parade when ice was added to the Auditorium - which as history reveals happened as Parade Ice Arena opened in 1973.  Numerous players, and fans alike remember the move of the popular Minneapolis city hockey preview games to the Auditorium - that began initially in 1959 and featured two 20 minute running time periods of hockey play between Minneapolis city teams, in a sort of pre-season scrimmage exhibition games against local rival schools.  "The Auditorium was unique, but also different as the boards were so high and the skaters had to jump onto the ice as the doors only went 1/2 way down.  We had to also sit in the front row of theater seats for our team [bench].  The rink had chicken wire for glass and the fans were literally sitting right next to us between shifts.  I remember the makeshift locker rooms being up the long ramp, and they placed duct taped rubber mats on the floor" said former Mr. Hockey Award winner and Minneapolis Southwest alumni to VMH by phone - Tom Chorske.  The later addition of ice, some 40 years after the Auditorium opened, was similar to that of the old Duluth Curling Club - hockey in the upper level and curling in lower, with the space in the lower exhibit hall below the Auditorium ice.  The building sadly fell into obscurity after the 1967 opening of the Met Center in Bloomington, and with changing demographics to local high schools not icing hockey teams - the building was later demolished in summer of 1989 to make way for the Minneapolis Convention Center, that still stands today (the arena area of the Auditorium was located in today's Convention Center exhibit Hall B). 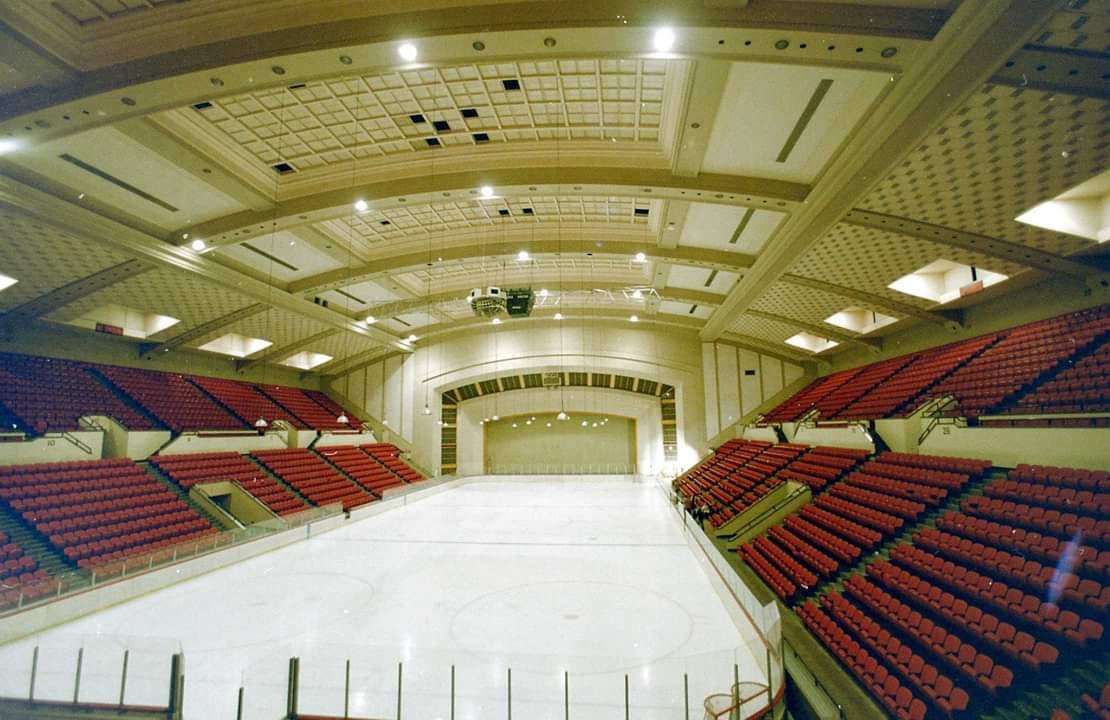 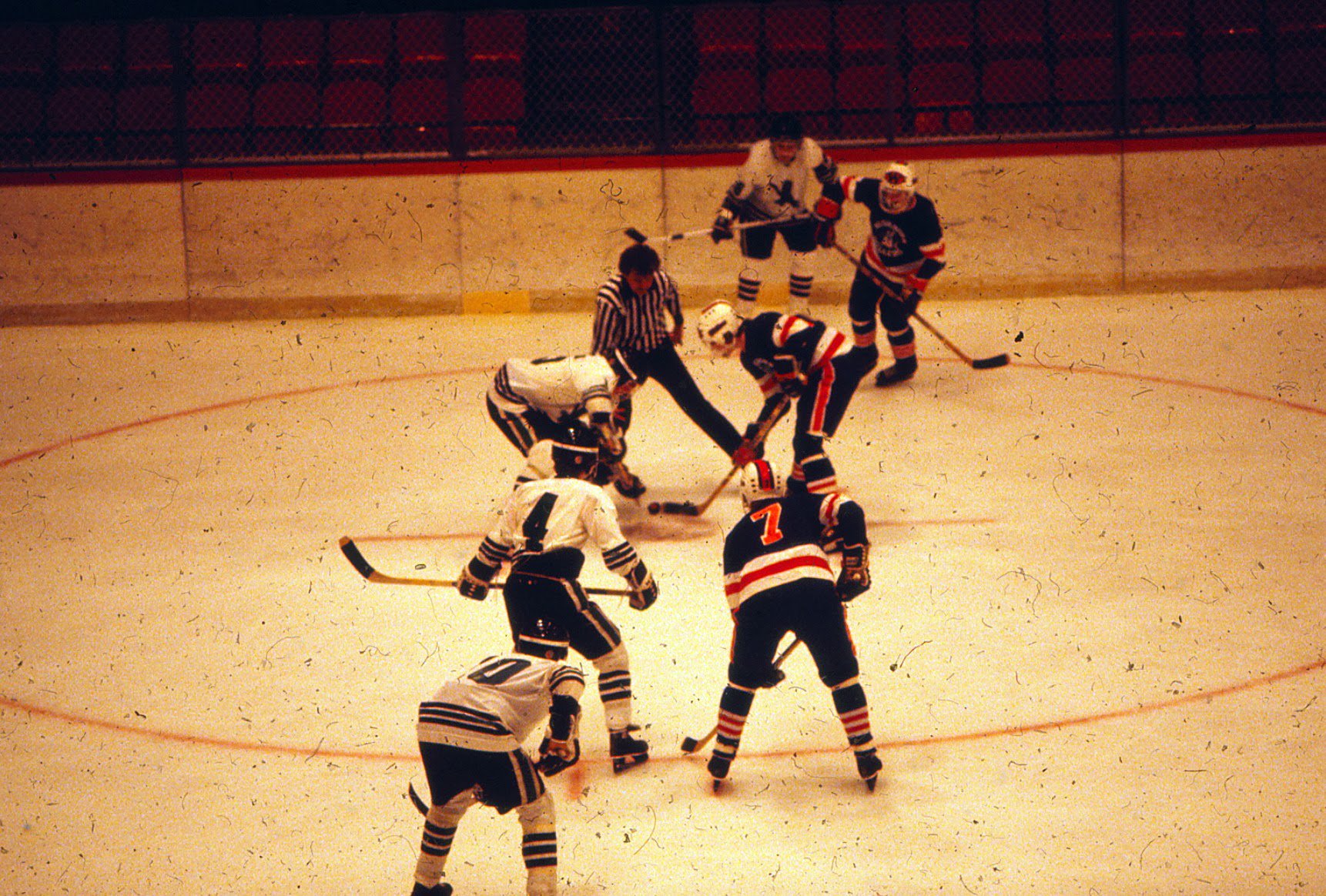 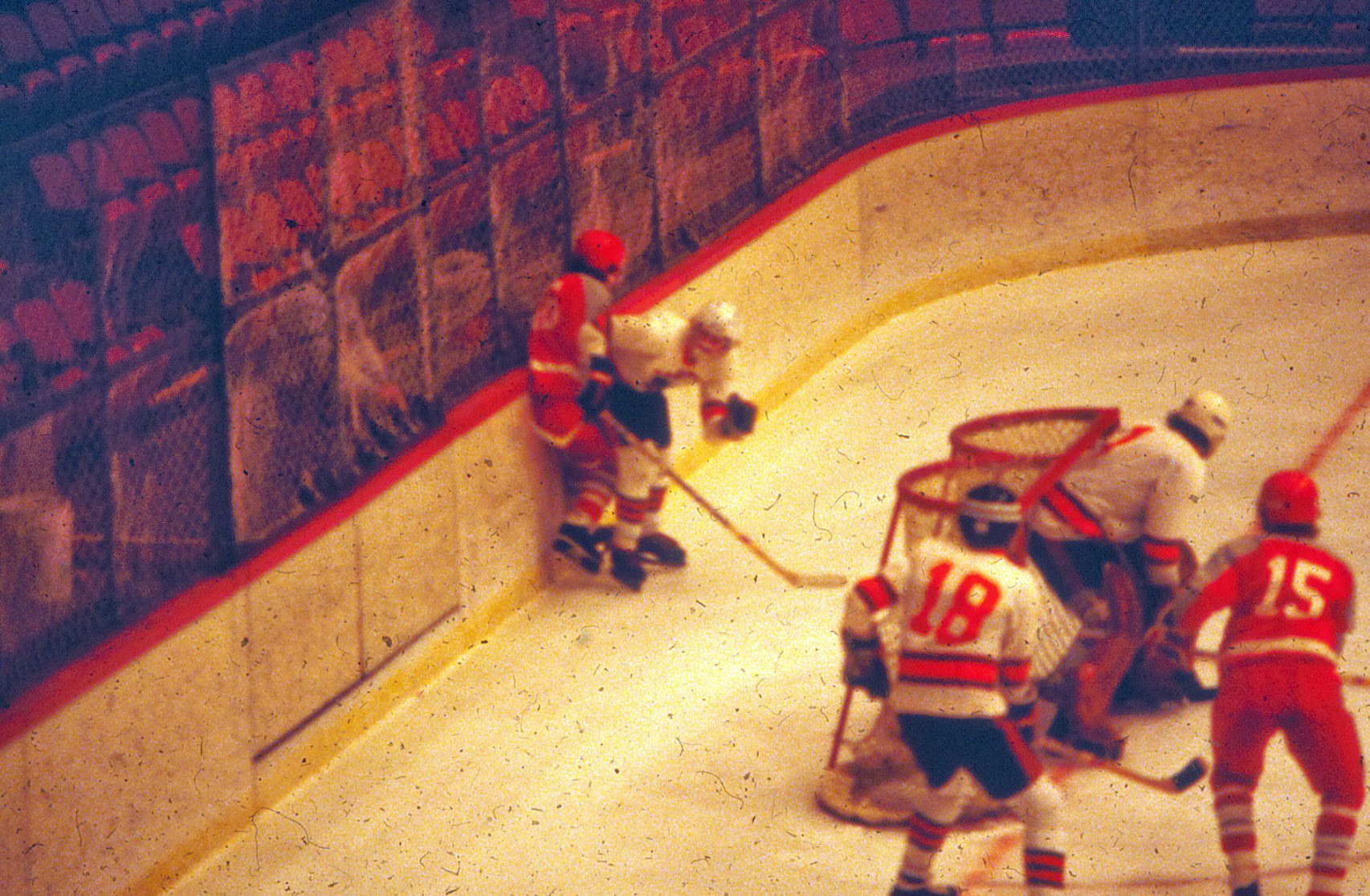 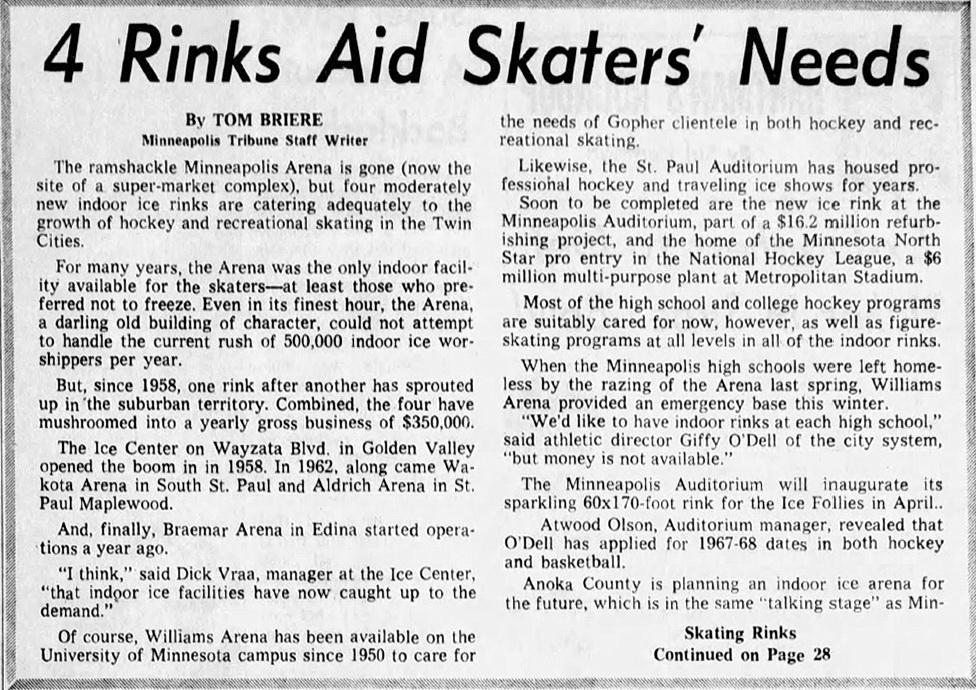 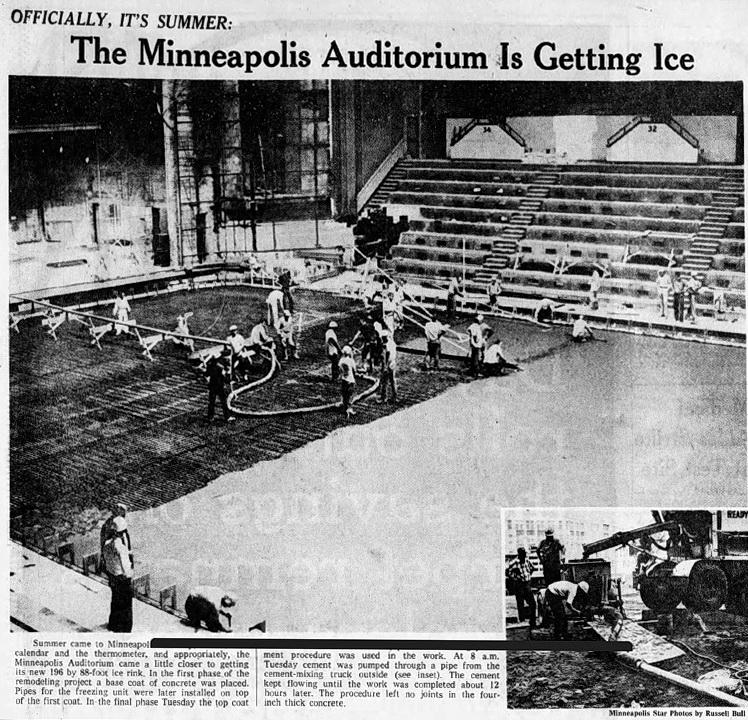 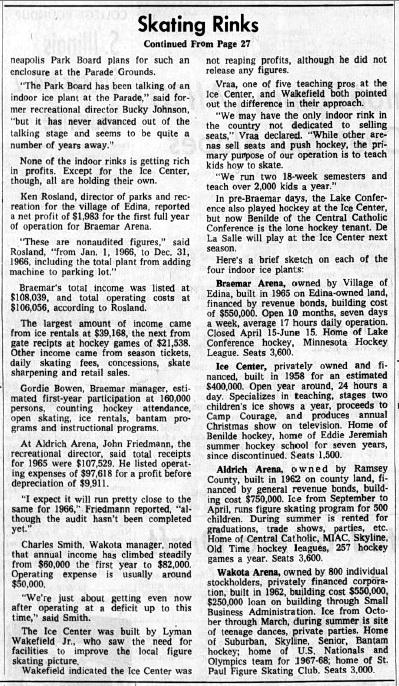