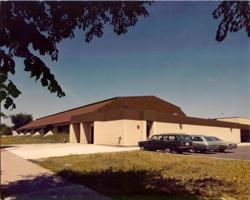 The Victory Memorial Ice arena is located at 1900 42nd Ave. N Minneapolis and is owned and operated by the Minneapolis School District.  VMIA features a standard ice surface (85’x200’) with seating for 300 spectators.  Over the years the arena has been the home ice venue for the various Minneapolis historic hockey squads of yesteryears that have since fanished within the city.  VMIA was erected in 1974 and hasn't changed much since the rink opened for league play.  Other than a few coats of paint, changes to the exterior and interior roof, interior lighting, new scoreboard, and replacing the chain-link "fencing" dashers to modern plexi-glass dashers - the original rink remains intact as it was in the 1970's - including the original refrigeration cooling system that has been a "work horse" even during the summer months.   The puck marks along the net-end walls can atest to the rinks many years of game action that are proudly displayed alongside the 1970 Minneapolis Southwest Indians State High School Championship banner, and the large Minneapolis Public Schools tournament appearances banner that are a trubute to what once was at VMIA, a time when Minneapolis fielded not only great High School teams, but the history that was achieved through the city that has roots dating back to the Minneapolis Millers hockey squads.  On April 19, 2010 the MSHSL announced that the two final remaining Minneapolis boys High School teams (East and West Minneapolis) would join together for the last remaining co-op in city history - joining the Minneapolis Novas girls High School team as the girls final cooperative city team as well.  "The Minnesota State High School League approved a co-op involving all seven school Minneapolis public schools beginning in the 2010-11 school year.  John Washington, the Minneapolis school district’s citywide director of athletics, said "Projected numbers of players do not support two teams, our teams graduated a lot of seniors and our youth program is not producing the numbers to fill in,” Washington said.  “We do not have enough players to field a JV and varsity team at both programs.”  VMIA is a classic that will continue to be the home rink to numerous youngsters who dream of playing High School hockey in the Mill City.  Just remember if one forgets their stick, tape, laces or mouth guard at home the VMIA office can supply you any of these for a paltry sum of less than $20 for a stick as shown in the lobby display price list.  A classic venue indeed.