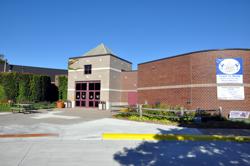 Parade Ice Center is located at 600 Kenwood Parkway, and lies on the edge of downtown Minneapolis near the popular Walker Sculpture Gardens/Art Center. Erected in 1973, it was one of several important citywide facilities established or enhanced during the 1970's building boom.  The construction of several suburban indoor artificial ice rinks had changed the sport of hockey in the metro area from an outdoor game to an indoor one, prompting the Minneapolis Park & Recreation Board to investigate the possibilities for an indoor rink within the city.  Initially three sites were outlined including locations in northeast, central and south Minneapolis.  The Board eventually decided to build at the centrally located site, Parade, to provide service equitably for the entire city.  Parade has a long history, with initial discussions to add a sheet of ice in the Parade back in 1966 before ice was added to old Minneapolis Auditorium following demise of Minneapolis Arena.  The history rich parade area of Minneapolis has an ancient course with the Mississippi once flowing through the site, resulting in an abundance of peaty soils perfect for gardening.  The Park Board acquired the land between 1903 and 1935 and the area became known as "The Parade", so named for the military drills and exercises practiced on the site.

Over 75 years ago, the Parade included the Armory gardens, which featured National Guard building and formal gardens originally designed by Park Superintendent Theodore Wirth.  In the late 1960s, Interstate Highway 94 severed the connection between Loring Park and the Amory garden site.  The Park Board utilized the Amory acreage for several ball fields.  In 1973 the tennis courts were relocated to their current location to make room for the Parade Ice Center.  In 1988 the Minneapolis Park & Recreation Board and the Walker collaborated to turn a section of the playing fields into the Minneapolis Sculpture Garden.  Today the Parade is still home to the Sculpture Garden, ball fields, tennis courts and the Parade Ice Garden.

The Parade Ice Center design included a small studio rink with dimensions of 96' x 56', unlike other indoor ice rinks. This second rink allowed at least two types of skating simultaneously with little additional management. Capital funds for this project were provided through the CLIC process and City Council.  Revenue from the rink attendance and rental was expected to pay operating costs and the construction of the studio rink.  Development of the indoor ice facility cost $840,000.  A second hockey rink was added in 1989 (larger North Rink) for a total of three rinks, two full size hockey rinks at 200' x 85' and the smaller studio rink.  Many portions of Disney's Mighty Ducks I & II were filmed within Parade Ice Arena's Rinks that was scripted as the "home ice of the rival Hawks" in the production of both Disney films.

Today, Parade "Ice Gardens" is the home ice to the Minneapolis Storm youth hockey association and the Minneapolis Novas Boys high school hockey team - which is a city-wide co-op team between: North, Edison, South, Roosevelt, Southwest, Washburn and Henry High Schools that have alone all had a rich history of icing teams in the State Tournament.  With changing city demographics in the inner cities, these school alone didn't have the participation to ice single teams.  Additionally, Totino Grace private school Boys and Girls hockey utilize Parade.  Most notably, the Minnesota Wild NHL team utilized Parade Ice Center as one of the main practice facilities when the Xcel Energy Center ice is was not available from 2000-2010 seasons.  The Minnesota Wild 2000-2001 inaugural team photo was taken within the walls of this historic arena.