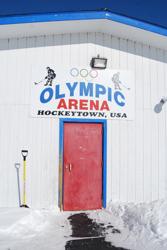 The Warroad Olympic Arena located at Elk St. NW in Warroad MN was built back in 1984 and is home to many former, and future Warroad youth that someday dream of donning the black and gold Warriors jersey of Warroad High School.  Olympic Arena, used mostly as an indoor practice facility, and youth game arena features a smaller than regulation ice sheet at 190' x 85'. Spectator seating is also smaller than most indoor arenas.  Recently furbished corner "viewing seating areas" aim to accommodate Warroad youth fans cheering on their favorite youth hockey player(s).  A portion of these renovations made namely called "Phase I Renovations" were completed in June of 2007 including new boards, plexiglass along the rink sides, heat in the corner viewing areas, and the old wooden boards were removed and replaced with modern style boards, all done with 100% volunteer labor.  The Community of Warroad for years raised money for future advancements to be made to the 25+ year old arena, to forever 'keep hockey free' within this proud hockey town U.S.A.  Prior to the construction, the arena only had 3 small locker rooms located immediately upon entering the "Hockeytown USA" red door inside of the small lobby.   "Phase II Renovations" were made funded 100% with community donations that expanded the lobby and viewing areas, upgrade with replacement locker rooms, and connected the Olympic Arena to the adjacent Gardens Arena via a walk-way with exterior face-lift to match that of (1993 Built Gardens).

Upon visiting Warroad every hockey fan should stop and see the old Olympic Arena and the "New" Gardens for a complete look at the history of hockey in Warroad.  With several Olympic Hockey players and Gold Medal winners having their beginnings in Warroad, the Olympic Arena and the original "Hockey Town USA" are truly "Hall of Fame.”