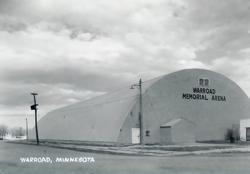 The Warroad Memorial Arena formerly located on the corners of Main and MacKenzie in downtown Warroad Minnesota was built back in 1949.  The Memorial arena was home to many former Olympic hockey greats, the Warroad Warriors high school hockey teams, and legendary Warroad Lakers hockey program for 44 years until the "new Gardens" opened in 1993.

Long time Warroad hockey activist, coach, and USHHoF inductee, Cal Marvin, was the main reason the Warroad Memorial Arena was constructed.  After the war ended in 1945, Cal was horrified that Warroad didn't have a rink yet.  Cal then got a rink going, and a unofficial team going in Warroad because Warroad couldn't yet get into the High School Hockey League.  Cal spent several years after the war ended working with a core group to talk, plan, and raise money for the purpose of getting a rink built in Warroad.  Eventually Cal, and Dick Roberts called a meeting to discuss the goal of building an indoor rink.  On the invitation list were some 35 business owners.  While the project was the dream of the Warroad Memorial Arena Association members, it didn't have complete support of the community.  This was at a time when the city needed streets and sidewalks and libraries and things like that.  The Association didn't object to those things, but thought Warroad needed a rink too.  "It was a tough haul back then...a tough sell." recalled Cal Marvin.  Then while they were students at the University of North Dakota, Cal and Gordon Christian went to the Buildings & Grounds office on campus and obtained a copy of the blueprints used to build UND's indoor rink.  The plans were then brought back to Warroad where Ed Christian, a local carpenter (and father of Olympians Gordon, Roger, and Bill Christian), scaled them down.  While the blueprints were in place to construct an arena, funding was not.  Over the course of two years the organization raised money by conducting bingo nights, benefit auction sales, fish derbies, raffles, bake sales, pledges, benefit hockey games between the Warroad Warriors and Warroad Lakers, and so on. By 1949, when Cal's dream became a reality the organization had over $9,500 in the arena fund.  The money was used to buy native poplar lumber in Canada, and was brought to Warroad where arena volunteers ran it through Marvin's old planer.  Ed Christian had made the rafters by hand on site and was hired by the association with his crew of three to four guys whom worked on the arena the whole summer in the daytime.  Then in the evening 30 or so would show up every night to continue the work progress.  "We gave up just about everything because we wanted so badly to see that arena go up" recalled Cal.  Construction was completed in time for the start of the 1949-1950 season.  The old Memorial arena was aptly called the "castle on the corner", and the "Gardens Arena" by Cal.  Thus when the new arena was constructed in Warroad next to the Olympic Arena, it was aptly named the "new Gardens" and with it a new legacy of hockey began in Warroad.

The Warroad Memorial arena saw several improvement through the years in the 1,800 seating capacity arena.  Locker rooms were built in the 1960's (prior to this players had to dress at a nearby business and walk to the rink), and artificial ice came in the 1970's after countless volunteer hours were spent flooding the ice manually from 1949-1970 on cold Warroad nights.

Sadly after sitting vacant in the downtown area for many years following the resurrection of the new Gardens arena, the Memorial was torn down.  Today the corner of Main and MacKenzie has nothing in the place of the old historic Memorial Arena except for memories from the locals, and an empty parcel of grass sometimes used by the city of Warroad for "city held summer events."

Special thanks to Beth Marvin for information and photos on the old historic Memorial Arena for placement on VMH.com.