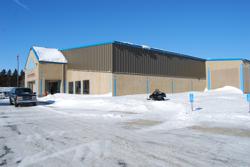 The Warroad Gardens was erected back in May of 1992, with construction completed on July 23, 1993.  Major funding for the project came in the way of R.A. "Tut" Marvin, along with his wife Mary Marvin in which they donated $500,000 to build a new hockey rink in Warroad that was erected at a total cost of $3.5 Million.  The "New Gardens" as it was aptly named - is home to several Olympic hockey legends and the Warroad Warriors High school hockey Boys and Girls teams.  The arena features the Warriors State High School Hockey Championship banners from 1994, 1996, 2003 and 2005 (Boys).  The Gardens' 70,000 sq. ft. arena features an Olympic-size ice sheet, eight locker rooms, a weight room, meeting rooms, and over 1,454 theater-style seats. The lobby area gives a taste of the history of hockey in Hockeytown, U.S.A containing showcases and photos of Warroad's six Olympic medal winners: Gordon, Roger, Bill, and David Christian, Dan McKinnon and Henry Boucha, whom is Warroad's most beloved player.  Boucha's #16 Warroad jersey today hangs proudly at the Gardens, since it was officially retired in the Warrior hockey program back in 2004.  Dick Roberts, the Warrior's coach back in the 60's and 70's, made the declaration back then that "#16 will be retired forever" but in 2004 it became official.  Henry has been labeled the "Most Electrifying high school hockey player ever in the state of Minnesota" Coach Oshie remarked.  "This will be the first jersey to go into the rafters and the beginning of a proud tradition." Also showcased are Warroad's US Hockey Hall of Fame Inductees Cal Marvin, Bill Christian, Roger Christian, Henry Boucha and David Christian, who was also inducted as a member of the 1980 US Olympic Hockey Team.  The original Warroad indoor rink called the Memorial Arena was in the downtown area of Warroad at the corner of Main and MacKenzie and was torn down after this "new" Gardens was built adjacent to the Olympic Arena.  The old downtown Memorial Arena was nicknamed the "Gardens" and the "Castle on the Corner" by longtime Warroad hockey activist, and U.S. Hockey Hall of Fame inductee Cal Marvin. Thus why this new arena erected in 1993 was aptly named "The new Gardens".

The Warroad Gardens Hockey arena is located at 707 Elk St NW 56763. Upon visiting Warroad every hockey fan should stop and see the Gardens Arena for a complete look at the history of hockey in Warroad.  With several Olympic Hockey players and Gold Medal winners having their beginnings in Warroad, the Gardens is truly "Hall of Fame," Warroad truly lives up to its reputation as "Hockey Town, USA".

Special thanks to Jude Boulianne from "The Gardens" for information on the Warroad Gardens.

Coaches have kept sports alive in 2020. Has your kid's coach helped them through this crisis?Nominate them   for a chance to win $2500!