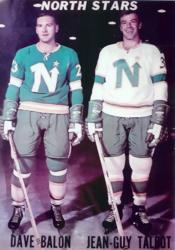 On March 11, 1965, NHL President Clarence Campbell announced that the league would expand to twelve teams from six through the creation of a new six-team division for the 1967–68 season.  In response to Campbell's announcement, a partnership of nine men, led by Walter Bush Jr. and John Driscoll, was formed to seek a franchise for the Twin Cities area of Minnesota.  Their efforts were successful as the NHL awarded one of six expansion franchises to Minnesota on February 9, 1966.  In addition to Minnesota, the five other franchises were California (Oakland), Los Angeles, Philadelphia, Pittsburgh and St. Louis.  The "North Stars" name was announced on May 25, 1966, following a public contest.  The name is derived from the state's motto "L'Étoile du Nord", which is a French phrase meaning "The Star of the North".  Months after the naming of the team, ground was broken on October 3, 1966, for a new hockey arena in Bloomington, Minnesota.  The home of the North Stars, Metropolitan Sports Center, was built in 12 months at a cost of US $7 million.  The arena was ready for play for the start of the 1967–68 NHL season, but portions of the arena's construction had not been completed.  Spectator seats were in the process of being installed as fans arrived at the arena for the opening home game on October 21, 1967.

On October 11, 1967, the North Stars played the first game in franchise history on the road against the St. Louis Blues.  The game ended in a 2-2 tie.  On October 21, 1967, the North Stars played their first home game against the California Seals.  The North Stars won 3-1. The team achieved success early as it was in first place in the Western Division halfway through the 1967-68 season.  Tragedy struck the team during the first season on January 13, 1968, when forward Bill Masterton suffered a fatal hit during a game against the Seals at Met Center.  Skating towards the Seals goal across the blue line, Masterton fell backwards, hitting the back of his head on the ice, rendering him unconscious.  He never regained consciousness and died on January 15, 1968 in Edinas Southdale Hospital, at the age of 29, two days after the accident.  Doctors described the cause of Masterton's death as a "massive brain injury".  To this date, this remains the only death as a result of an injury during a game in NHL history.  The North Stars retired his jersey, and later that year, hockey writers established the Bill Masterton Memorial Trophy which would be given annually to a player who best exemplifies the qualities of perseverance, sportsmanship and dedication to hockey.  Following the news of Masterton's death, the North Stars lost the next six games. 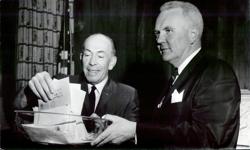 The North Stars would achieve success in their first year of existence by finishing in fourth place in the Western division with a record of 27-32-15, and advancing to the playoffs.

The sweaters the Minnesota North Stars donned in their first year of existence have been examined from many viewpoints - including our recent "Minnesota Jersey Project" in which we examined every Minnesota Collegiate and Professional jersey style of each year(s) jersey that was worn in game play.  One thing we have noticed, including the popular NHLUniforms.com website, is that not ALL of the North Stars jerseys have been discussed, or written about for the teams inaugural season as the team wore three different styles during their first year in the State of Hockey. From our research of older North Stars images, hockey cards, and game programs from the Stars inaugural year one can clearly see that the front crest and numbering font is much different than what the Stars donned for a good portion of their first year.  The top left portion of the Stars "N" crest is angled, with a smaller and less proportionate star that is clearly seen in photos.  We are not 100% as to how long this style of logo was used but think it may have only been for the Stars pre-season games from October 11th - October 16th.  In looking at other early photos of the Stars 1967 season one can see that the players crest appear to be adhered or taped onto the jerseys loosely in posed images.  We think that the public, owners, or graphic artist hired to produce the N-Stars logo and number font didn't like the appearance of the early jerseys, and subsequently re-worked the logo and numbers and re-cut twill for these jerseys that were then later sewn on.  The 1967 jerseys were also unique in that they had a vintage style lace-up neck that was also later scrapped in 1967 for a standard V neck that is additionally shown in the posed 1967 team photo. Prior to 2013, the only known jersey in existence that was known to exist was that of Bill Masterton's home-green #19 pre-season jersey that is part of the Manitoba Hockey Hall of Fame collection after it was donated by the Masterton family.  Then, in 2013 an un-named long time Twin Cities media personalities storage locker was auctioned off after the bills were un-payed.  The contents of said storage locker contained a gold mine team set of the 1967 pre-season away white North Stars jerseys included Masterton's, Goldsworthy, and many more as part of the lot that was auctioned.  A local Twin Cities sports card collector was the one whom walked away with these rare gems.  We had the opportunity to photograph the entire set of jerseys as shown in the images below.

Thus..x3 different styles of jerseys were used by the North Stars in 1967. 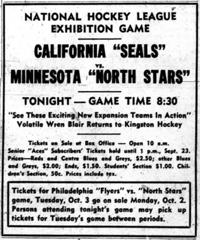 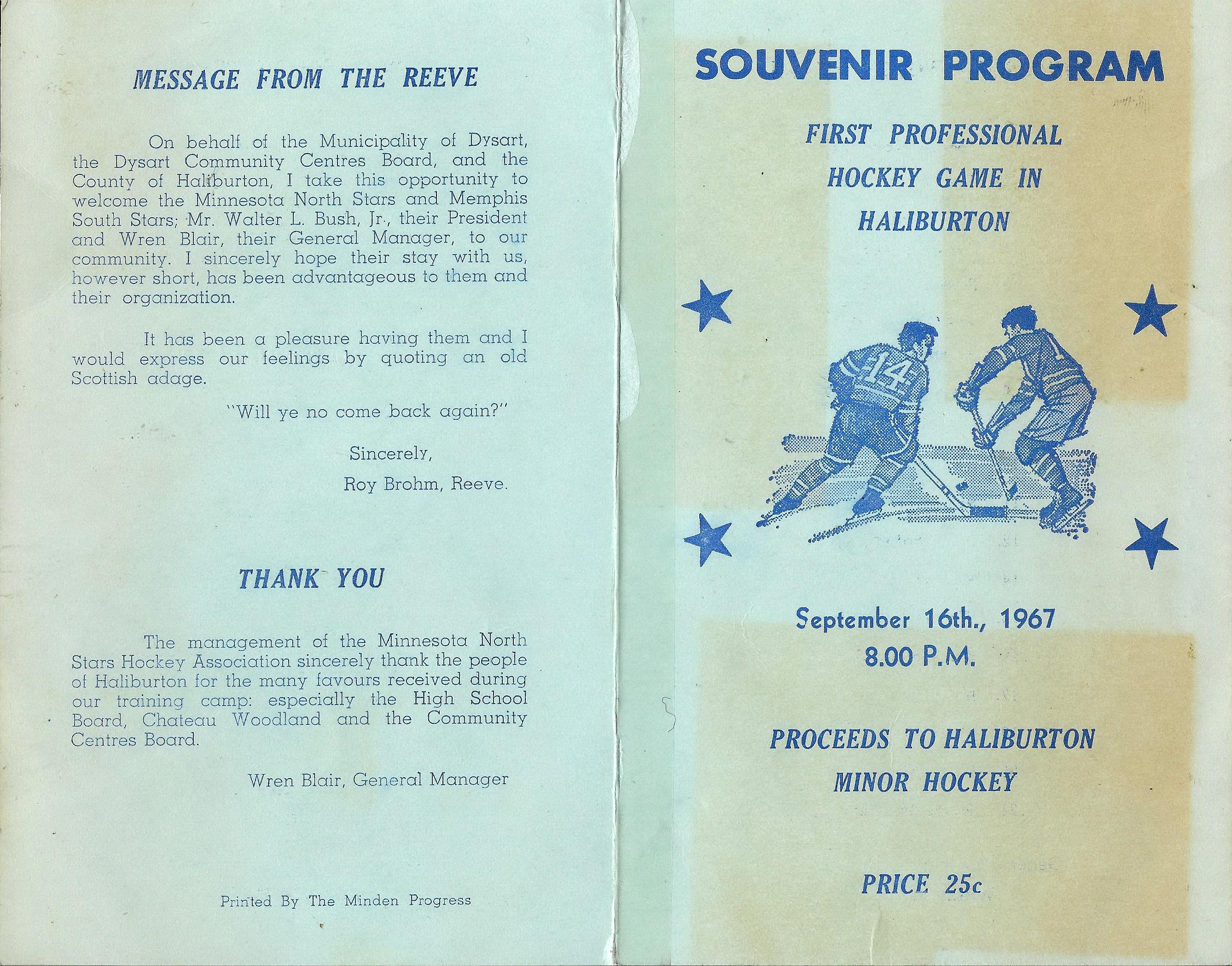 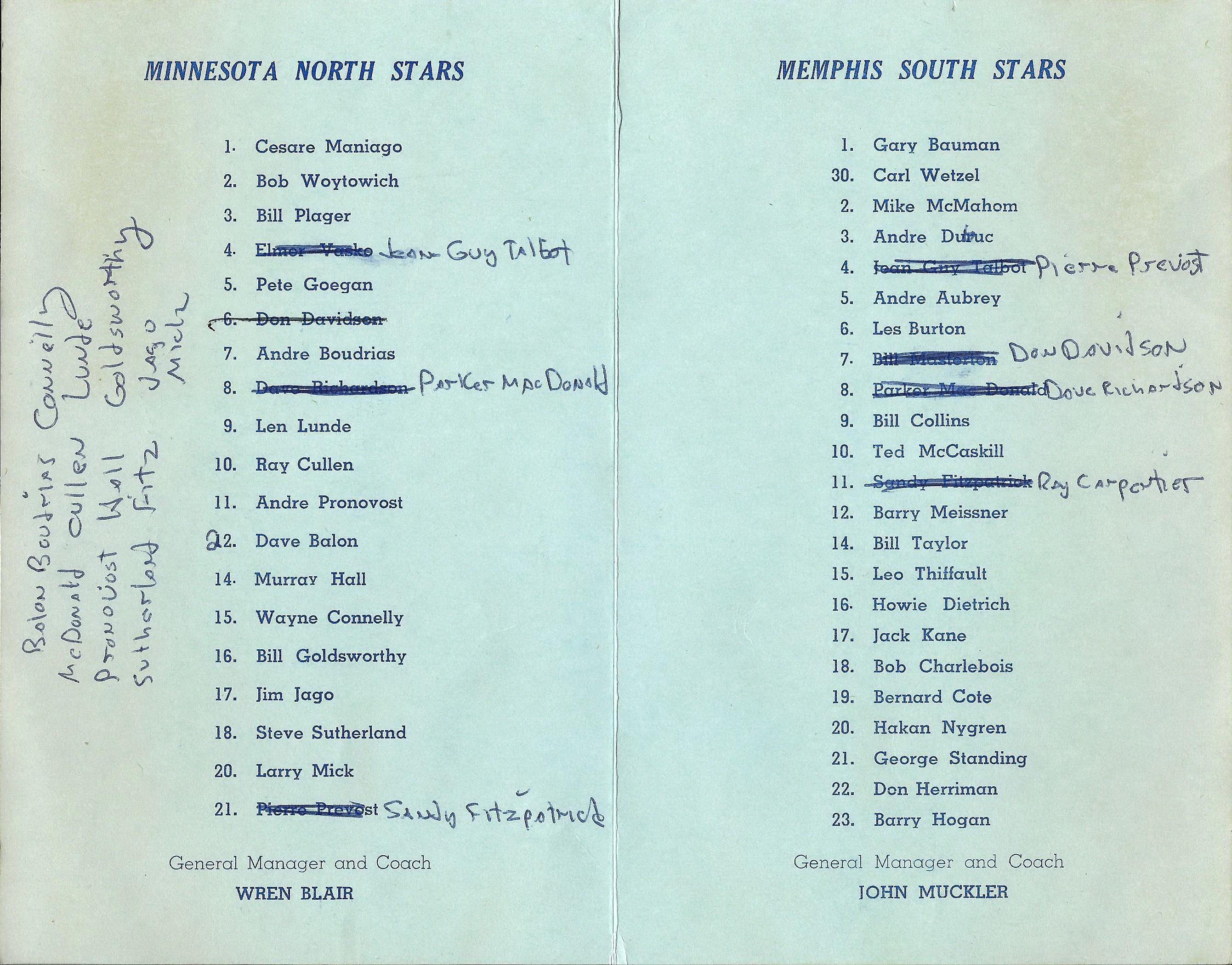 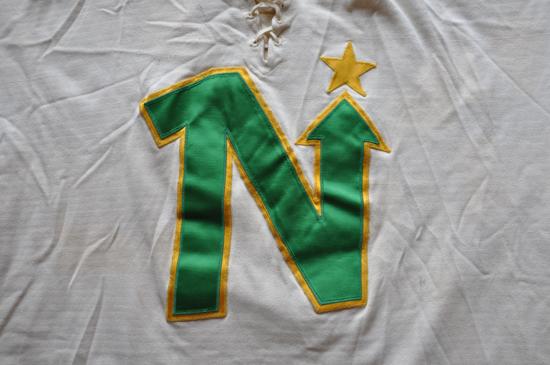 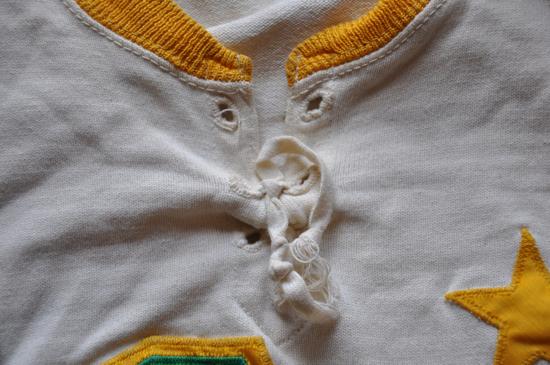 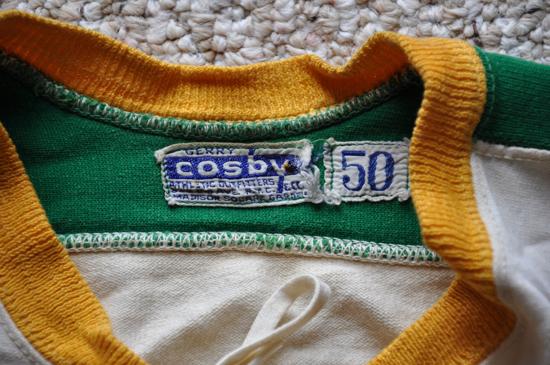 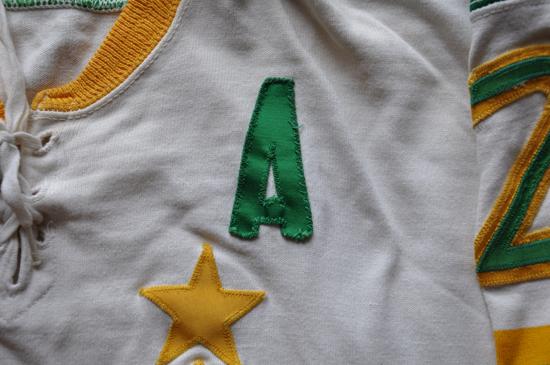